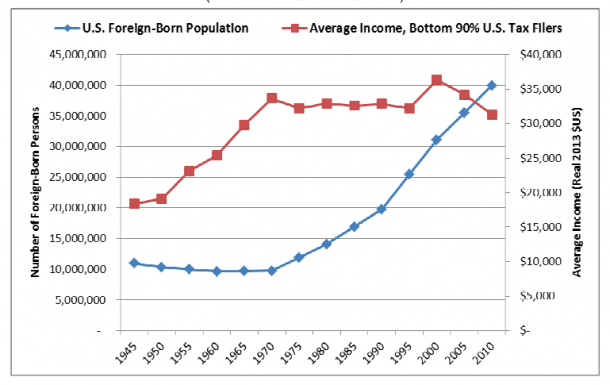 Displaced workers who have lost their jobs to foreign workers are now suing the Obama administration for breaking long established labor laws that say work visas cannot affect wages.  It is their contention that Obama is pushing so many immigration orders through it’s seriously affecting Americans looking for jobs.

There is a direct correlation between foreign workers and depressed wages.  A prime example of this is tech giant Southern California Edison.  They laid off hundreds of computer American analysts and forced them to train foreign workers granted HB-1 visas by Obama.  That’s because they had to pay Americans $95,000 a year and they only paid the foreign workers $65,000.  It’s not hard to see why big business wants more foreign workers.  It also explains why there are so many American workers out on the streets.

“The law states that foreign work permits cannot adversely affect American wages, but all we’ve seen during this administration is standards of living fall and outsized corporate profits continue to rise.”

The workers are being represented by the  Immigration Reform Law Institute.  The biggest hurdle they face is convincing the judge that they have standing.  Obama’s liars for hire will argue that the workers could not possibly know what affect adding 10 or 20 million new immigrants will have on their job prospects.  But there is a direct connection between the two.  Unfortunately, Harry Reid used the nuclear option to get Obama’s activist judges on the bench all across the United States.  (Rand Paul says activist judges are a good thing.  At least until the wind blows in the other direction.)

The lawsuit requests that the judge put an injunction on various amnesty programs until the courts decide on the merits of the suit.