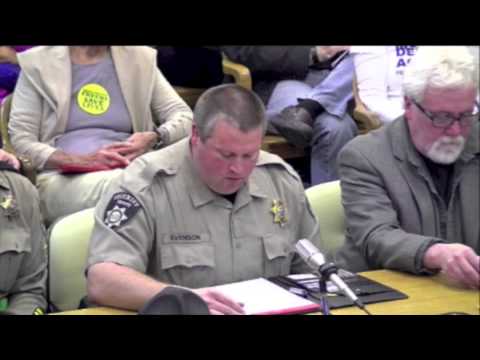 Earlier this week, I wrote about Josephine County Sheriff Dave Daniel took a stand alongside other constitutional sheriffs in Oregon and issued a statement to the media that he would not enforce the requirements of Senate Bill 941, which puts tighter restrictions on Oregon citizens concerning the sale of firearms. This week, sheriffs from across the state testified to representatives that they would follow the sentiment of Daniel and not enforce the bill, should it become law.

Tami Jackson, at Saving Our Future, provided the following videos of the testimony of these sheriffs.

Additionally, other sheriffs wrote letters to express the fact that the bill was unconstitutional and a violation of the rights of the people.

And then here is a letter from Columbia County Sheriff Jeff Dickerson:

As I told you previously, this bill does nothing but infringe on the rights of law abiding citizens in Oregon. Even the summary of the bill is quite telling:

The issue with guns are not law abiding people. Further laws and background checks are not going to stop criminals from obtaining guns. In fact, it is openly demonstrable that these kinds of laws are only used to keep law abiding citizens, including our veterans, from obtaining guns. It is also a means for putting together a database for those who have guns, something for which could be collected nationally by the unconstitutional ATF and then assimilated into the national register of the UN Small Arms Treaty, which John Kerry lied about. And don’t tell me the ATF wouldn’t do it because we already have evidence that they are illegally going into gun stores and collecting gun buyer’s information, or at least attempting to do so.

These sheriffs should be supported by the people, and apparently the people are backing their stand. Not only are citizens overwhelmingly opposed to the bill, but now, just like in Colorado, they are starting a grassroots movement to oust gun grabbing servants of the people through a recall. May God grant them the grace to see resolve as Colorado did. And for those that don’t think a recall won’t work in Oregon, just remember that it was constitutional sheriffs that took the stand first and the citizens followed, even to push to the point of creating a 51st state to protect citizens’ rights.

Mel Gibson‘s character William Wallace, from the film Braveheart, told Robert the Bruce the truth about titles and positions of power. “Now tell me, what does that mean to be noble? Your title gives you claim to the throne of our country, but men don’t follow titles, they follow courage. Now our people know you. Noble, and common, they respect you. And if you would just lead them to freedom, they’d follow you. And so would I.”

Indeed, and so the people of Oregon are doing just that, following courage!