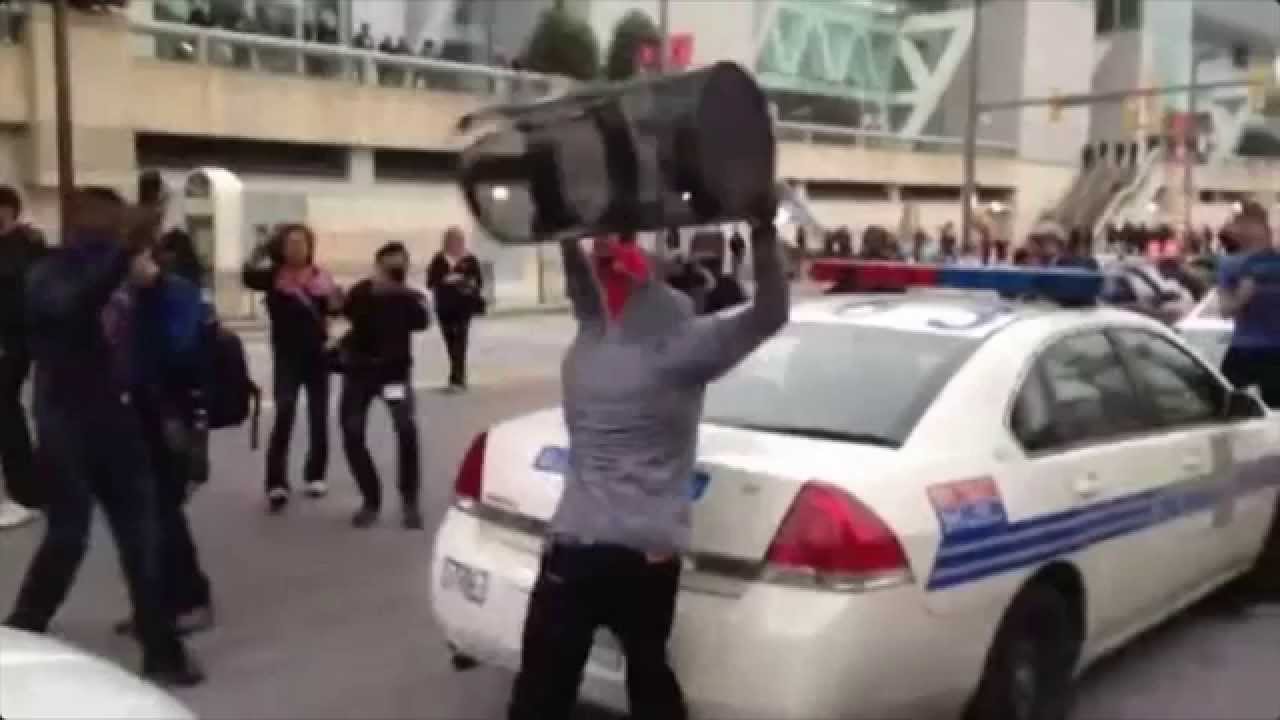 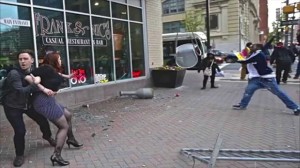 On Saturday night, the city of Baltimore resembled a warzone as protests over the death of Freddie Gray turned wildly violent.  One eyewitness reported watching the streets around him and his friend “turn into madness” as they left a baseball game between the Boston Red Sox and the Baltimore Orioles.  Car windows were smashed, stores were robbed, chairs were thrown and large numbers of random bystanders were attacked.  One prominent Democrat claims that those committing the violence were “mainly from out of town“, but how would he know that?  Today, there are approximately 2.7 million people living in the Baltimore metropolitan area.  It is an area that has been known for poverty, crime and drugs for many years, and as racial tensions continue to increase in this country it is a powder keg that could erupt at literally any time.  We got a preview of what can happen on Saturday night.  If this is how people will act while economic conditions are still relatively stable in this country, what in the world is going to happen when things really start falling apart?

On Saturday, April 11th, I delivered a presentation down in Dallas, Texas in which I warned about the rioting and civil unrest that are soon coming to this nation.  On slide number 145 of the presentation, I specifically named the city of Baltimore as one of the cities where this would happen.  But I had no idea that the rioting in Baltimore would begin so quickly.  And the violence that we saw on Saturday night was at a level that was quite shocking.  The following is how the Daily Mail described some of the chaos that ensued…

Local news captured live footage of a man throwing a flaming trash can at the police line.

A group of roughly 100 protesters broke out a window of a department store with a chair they got at a restaurant across the street at The Gallery, a downtown shopping mall.

The same group broke the windows of restaurants including a Subway sandwich shop near Camden Yards, tossing chairs and tables through the glass.

Protesters also engaged with a group of Orioles fans at Slider’s Bar and Grille and began fighting with patrons.

This kind of thing is not supposed to happen in America.

But it is happening.  Ferguson set the precedent, and now this is going to spread all over the country.

You can see some excellent photographs of the chaos that happened in Baltimore right here, and in the video posted below several young thugs smash out the front window of a police cruiser as dozens of onlookers cheer them on…

I also want to share with you another video, but I need to warn you about it first.  This YouTube video strings together a bunch of clips of some of the worst of the violence, but it also contains some very graphic language.  So please don’t let any young children watch this.  I felt that it was important to share this because we need to really understand what is happening to our cities.  America is changing, and not for the better.  This is what social decay looks like…

Things were so bad outside of the stadium where the Baltimore Orioles play that some of the Orioles actually thought about spending the night inside the clubhouse.

One of the things that is being ignored by many in the mainstream media is that fact that one of the key organizers of the Baltimore protests is a former national chairman of the New Black Panther Party named Malik Shabazz.  These days, he is the president of an organization known as “Black Lawyers for Justice”, but he is definitely still up to his old tricks.  The following is an excerpt from an article about the Baltimore riots in the New York Times…

There, Malik Shabazz, president of Black Lawyers for Justice, a Washington, D.C.-based group that called for the demonstration and advertised it on social media, told the crowd that he would release them in an hour, adding: “Shut it down if you want to! Shut it down!”

Mr. Shabazz said in a later interview that his rhetoric was intended only to encourage civil disobedience — not violence — but added that he was “not surprised” by the scattered angry outbursts because people here “haven’t received justice.”

If you are marching for “justice”, you don’t throw objects at random bystanders, loot stores or attack vehicles that are just driving through the area.  But all of those things happened on Saturday night.  The following is how an eyewitness described one of the most harrowing attacks…

The crowd of protesters then stopped a blue station wagon carrying a white family as they tried to drive past Pickles, Bullpen and Sliders along a narrow one-way stretch between the bars and the main road. As a horde of them smashed their open and closed fists on the hood of the car—while impeding them by standing in front of them—the driver backed up on the one way pass in a desperate attempt to get out of dodge. Then, stopped on the other side with nowhere to go, protesters ripped open the passenger door of the car and began reaching around inside the vehicle. As hundreds of people looked on, including several police officers who didn’t engage the violent protesters, the white woman in the front seat—middle-aged and a little heavyset with dark hair—was visibly terrified. The group of black men who ripped open the car door suddenly realized they were separated from the larger group of protesters and abandoned their quest to seemingly either carjack the station wagon or rob the people inside in front of hundreds, driving out of the one-way street back onto the main road and presumably out of dodge.

Of course all of this did not just erupt out of a vacuum.  Racial tensions on all sides have been stirred up by the mainstream media, by our politicians, and by other prominent national leaders for years.  At this point, even pastors are inflaming the tensions…

Activist Jamal Bryant, pastor of Empowerment Temple AME Church, told his congregation Sunday that “somebody is going to have to pay” for Gray’s death, the Associated Press reported.

If “you’re black in America, your life is always under threat,” Bryant said.

Why can’t we all just learn to love one another, forgive one another, and peacefully come up with some solutions that are going to work for all of us?

Sadly, all of this hate and anger is just another sign of the social decay that is eating away at the foundations of our society like a cancer.

And if people are willing to act like this when our economy is still relatively stable and things are still relatively good in this nation, what are they going to do when they don’t have any money in their pockets and they don’t know where their next meal is going to come from?

What we witnessed in Baltimore on Saturday night is just the beginning.

Much worse is coming, and eventually we are going to see tremendous civil unrest and rioting all over this nation.

So what do you think about all of this?  Please feel free to share your opinion by posting a comment below…