Chaos continues as authorities accused of failing to deal with unrest

Matt Drudge warned that America could fall in the aftermath of riots that tore through Baltimore yesterday as thousands of National Guard troops were called up to deal with potential further unrest.

America, and everyone in it, must take a collective deep breath. The country could fall… #BaltimoreRiots pic.twitter.com/bbBzWUTgOk

“America, and everyone in it, must take a collective deep breath. The country could fall,” Drudge tweeted.

Following widespread looting and arson attacks yesterday afternoon, the riots continued into the night, with many accusing Baltimore authorities of failing to respond quickly enough to the crisis.

Baltimore Mayor Stephanie Rawlings-Blake waited for around 5 hours to even make a statement as businesses burned and gangs of violent mobs ran riot, prompting Maryland Gov. Larry Hogan to imply that the Mayor had waited too long to call out the National Guard, telling a reporter he was “glad that she finally did” make the decision.

During the press conference attended by Rawlings-Blake and other officials, hostility appeared to be targeted more at the media than the rioters, with accusations flying that the press refused to focus on “peaceful” demonstrators.

This guy just slammed the media for not focusing on “peaceful” protests. #BaltimoreRiots pic.twitter.com/9Ed81Rmm8b

The Mayor had already come under intense criticism for suggesting that violent groups had been given “space to destroy” during initial unrest on Saturday.

Rawlings-Blake also refused to impose a quick curfew, instead announcing that it would only take place the next day.

Baltimore’s Mayor just gave rioters another ‘safe space’ for tonight – curfew will not be imposed until TOMORROW. #BaltimoreRiots

Meanwhile, some elements of the leftist media continued to make apologies for the looters, with MSNBC’s Rachel Maddow insisting that cops had acted “out of control” for throwing back rocks that had been pelted at them for hours by rioters.

CNN’s Wolf Blitzer also bizarrely expressed concern about a police car that was driving too quickly through the streets of Baltimore as other areas of the city were beset by chaos.

CNN commentator Marc Lamont Hill also sought to legitimize the rioters, asserting, “There shouldn’t be calm tonight,” even as thugs burned and looted businesses owned by other black people at which black people are employed.

Infowars will continue to monitor developments as they unfold.

Another building on fire. Baker and N Mount #BalitmoreRiots pic.twitter.com/rOlfod0OIr

Someone in Baltimore just cut fire hose with a knife so firefighters can’t put out CVS fire pic.twitter.com/XD9fFehyLK

Well done rioters for ensuring that millions of Americans will care LESS about police brutality and demand MORE government. #BalitmoreRiots

Remember, according to the feds it’s those dangerous right-wingers who we really have to worry about! #BaltimoreRiots pic.twitter.com/g484ZyPDus 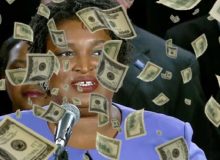