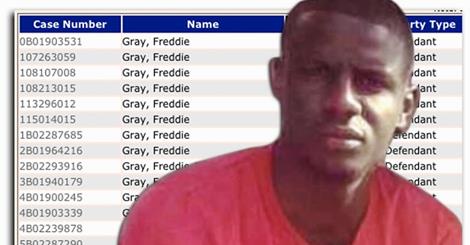 Freddie Gray, 25, a name that will become synonymous with names like Rodney King, Michael Brown and Eric Garner because he died because of injuries alleged to have been inflicted by police. Now a city is tearing itself apart over the death of Gray.

First, take a look at the arrest video following police on bicycle chasing Gray down. At least from the following video, it appears almost like the police have Gray in a hogtied position.

Gray had a lengthy arrest record with convictions dating back until at least 2007, according to the Maryland Department of Justice. Not all of the arrests led to convictions, in many of the cases he pleaded guilty to one charge while the others were dropped. Details of when he spent time in prison were not immediately available. His arrest record includes at least 18 arrests:

Now, just because the man had a criminal history does not then lead to any type of force being used upon him to kill him. So far, even the video does not present the kind of evidence that led to Gray sinking into a coma and having his spine “80 percent severed” at his neck while in police custody, according to the family’s attorney Billy Murphy, Jr. However, it appears the spinal injuries were the result of a previous car accident and subsequent surgeries.

“We believe the police are keeping the circumstances of Freddie’s death a secret until they develop a version of events that will absolve them of all responsibility,” Murphy said in his statement to the media. “However, his family and the citizens of Baltimore deserve to know the real truth; and we will not stop until we get justice for Freddie.”

According to the arrest report obtained by The Guardian, Gray was arrested without incident and charged with unlawfully carrying a switch blade knife. However, how were police to have known he had such a knife until they had stopped him? They found it on him after they had made the arrest, according to the report.

The report also tells us that he fled unprovoked upon noticing police presence, but also says, “the defendant was arrested without force or incident.” So by the report, there was no force used and no incident followed.

However, a final note in the report states, “During transport to Western District via wagon transport the defendant suffered a medical emergency and was immediately transported to Shock Trauma via medic.”

In the video above, Gray can be seen being dragged by police into the wagon, his legs limp.

So where did his injuries come from which put him in the hospital and that later he died from? No one knows at this point.

Deputy Police Commissioner Jerry Rodriguez told the Associated Press, “We had officers in a high-crime area known to have high narcotic incidents. The officers believe that Mr. Gray was immediately involved or recently involved in criminal activity and decided to make contact.”

While police claim that once Gray was loaded in the wagon, they made only one stop to place extra restraints on Gray. However Murphy told the AP:

Mayor Stephanie Rawlings-Blake tweeted out that the city would investigate what happened and “hold the right people accountable.”

I want to let people know that we will find out exactly what happened, and we will hold the right people accountable.

Now, stop and think about this for a moment. Gray was not a good guy, but even by the police report was only guilty of carrying a swtich blade knife, something that should be protected under the Second Amendment. I certainly am not attempting to justify the man or his criminal history, which was quite recent. However, I’m cautious about what he was alleged to have been involved in at the time of his arrest. In either case, everything that happened from the moment he fled police could have been avoided by not fleeing.

No matter what, nothing here justifies people destroying private property and acting like a bunch of animals. We are supposed to deal lawfully, regardless of color and regardless of one’s past. However, we have this little nugget from the Baltimore Police:

Groups of outside agitators led to small pockets of protestors engaged in criminal activity. … While the vast majority of arrests refect local residency, the total number of arrests does not account for every incident of criminal activity. The Baltimore Police Department believes that outside agitators continue to be the instigators behind acts of violence and destruction.

Sounds very reminiscent of Ferguson, doesn’t it? Outside provocateurs come in and work their magic to stir up the people, and who does this work for? Who is behind it? It wouldn’t surprise me to find the fingerprints of Eric Holder, Barack Obama and the usual suspects all behind this. Even more telling is that this rioting is coming at a time when the supreme Court is hearing oral arguments regarding the redefining of marriage to include sodomy. Coincidence? I think not.