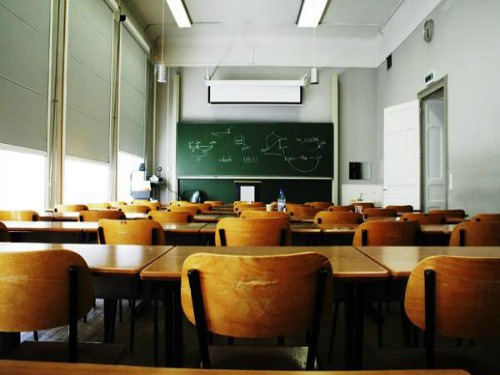 A Pennsylvania dad received a scolding from his children’s school for doing the unthinkable: he let them MISS SCHOOL (*gasp*!) to go on a short vacation.

Michael Rossi took his nine-year-old twins on a family trip and was given what he calls a “nasty-gram” from the principal.

He posted a photo of the letter on Facebook, and it went viral.

I’m not sure which part of the letter is the most ridiculous.

I mean, the part that says, “…the Abington School District does not recognize family trips as an excused absence, regardless of the activities involved in the trip” made me roll my eyes, but then I kept reading and saw the next line:

“The school district is not in the position of overseeing family vacations or evaluating the educational nature of a family trip.”

Oh, but I bet they wish they were in such a position. After all, schools have become increasingly meddlesome in recent years, even going as far as asking children what kinds of goodies their parents keep in their home medicine cabinets, calling the police to interrogate an 11-year-old student about his mother’s medicinal marijuana use, and asking middle school students how far they’d go sexually.

The next part of the letter, in my opinion, is a glaring example of how the police state has infiltrated the public school system:

“An accumulation of unexcused absences can result in a referral to our attendance officer and a subsequent notice of a violation of the compulsory school attendance law.”

“Attendance officer“? A “violation of the compulsory school attendance law”?

Here’s what an attendance officer is, from the Pennsylvania Department of Education website:

The employee is to enforce the provisions of the Pennsylvania School Code regarding compulsory attendance. These individuals have full police power without warrant, and may arrest or apprehend any child who fails to attend school in violation of compulsory attendance. State, municipal, port authority, transit authority, housing authority and school police officers are provided with the same arrest powers.

About that “compulsory attendance law”: break it, and you’ll face a fine of up to $300 for each offense plus court costs, and if you can’t (or won’t) pay those fines, you’ll be granted a nice little stay at the local jail for “no more than 5 days.”

In Pennsylvania, truancy is defined as more than three days of “unexcused absence” from school.

By the way, the document that covers all the laws and policies related to attendance in Pennsylvania is 151 pages long.

Mr. Rossi wrote this eloquent response to the principal:

While I appreciate your concern for our children’s education, I can promise you they learned as much in the five days we were in Boston as they would in an entire year in school.

Our children had a once-in-a-lifetime experience, one that can’t be duplicated in a classroom or read in a book.

In the 3 days of school they missed (which consisted of standardized testing that they could take any time) they learned about dedication, commitment, love, perseverance, overcoming adversity, civic pride, patriotism, American history culinary arts and physical education.

They watched their father overcome, injury, bad weather, the death of a loved one and many other obstacles to achieve an important personal goal.

They also experienced first-hand the love and support of thousands of others cheering on people with a common goal.

At the marathon, they watched blind runners, runners with prosthetic limbs and debilitating diseases and people running to raise money for great causes run in the most prestigious and historic marathon in the world.

They also paid tribute to the victims of a senseless act of terrorism and learned that no matter what evil may occur, terrorists can not deter the American spirit.

These are things they won’t ever truly learn in the classroom.

In addition our children walked the Freedom Trail, visited the site of the Boston Tea Party, the Boston Massacre and the graves of several signers of the Declaration of Independence.

These are things they WILL learn in school a year or more from now. So in actuality our children are ahead of the game.

They also visited an aquarium, sampled great cuisine and spent many hours of physical activity walking and swimming.

We appreciate the efforts of the wonderful teachers and staff and cherish the education they are receiving at Rydal Elementary School. We truly love our school.

But I wouldn’t hesitate to pull them out of school again for an experience like the one they had this past week.

Thank you for your time.

Mr. Rossi, who has a meeting with the principal scheduled for today, said his wife notified the school about the planned absences in advance:

“What’s frustrating is that a week before we left for vacation, my wife notified the kids’ teachers and we had planned for them to make up the standard testing period, which they did.

I want to be clear that I am not angry with Principal Marbury but the policy set by the school district to deal with unexcused absences doesn’t make sense.”

So, why are public schools so pushy about attendance? You might think that the powers-that-be are simply concerned about children getting a good education.

But a deeper look reveals a possible reason schools want your kiddos there each and every day: attendance-based funding. Every public school in Pennsylvania receives a score from 0 – 100, with room for additional “extra credit.” Points are earned based on test scores, graduation rates, and attendance.

And in part, we can thank the No Child Left Behind Act of 2001 (NCLB), because it requires schools to report truancy data to the federal government:

The law did not specifically punish schools for truancy, but it created a social and political link between absence and negative outcomes for students. And with its explicit threat to declare low-performing schools as “failing,” the law infected state-level lawmakers, prosecutors, and judges with a zeal to eradicate the perceived causes of low test scores—with truancy seen as among the worst.

According to an analysis of data collected by the Education Commission of the States, a nonprofit that tracks policy trends, the era of national school reform launched by NCLB has coincided with a burst in state-level lawmaking related to school attendance. Since 2002, when NCLB went into effect, states have passed an average of 23 new attendance-related bills per year. At least one-third of the states have passed laws that deepen court involvement in school absence or establish stiffer legal penalties for truant students and their parents. States have also decreased the number of absent school days required to be declared truant and pushed school administrators to report truancy cases directly to the courts. (source)

(By the way, this is the main reason I withdrew my own child from the public school system and am now homeschooling.)

Sometimes, breaking truancy laws has tragic results. They tend to affect lower-income families more often, and increase their entrapment in the cycle of poverty.

Last year, Eileen DiNino, a stay-at-home mother of seven in Pennsylvania, was sentenced to 48 hours of incarceration to erase about $2,000 in court costs and truancy fines (for several of her children dating back to 1999) that she was unable to pay.

DiNino died in jail of “natural causes” linked to cardiovascular disease. But her cell mate said the jail failed to provide proper care for DiNino after she told a corrections officer and a nurse that she was having trouble breathing. No one was charged for her death.

Public schools have become indoctrination centers for the police state, with policies that are designed to groom children into compliant citizens.

I’m reminded of a quote from the late French philosopher, Michel Foucault:

The schools get to decide if your child’s absence is “authorized.” You, as the parent or legal guardian, do not.

Egad. I just had a flashback of video footage from a Common Core  meeting last year, during which a panelist said, “The children belong to all of us.”

Perhaps Mr. Rossi’s powerful letter will inspire change. If anything, it may encourage other parents to speak up about ridiculous and totalitarian policies that are impacting their children. Often, people blindly accept authority and society’s established “rules” without question, no matter how nonsensical those rules are.