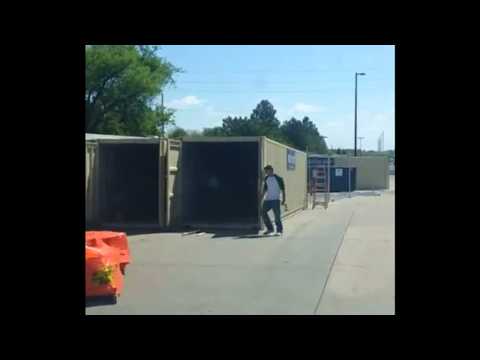 Pardon the pun as they say, but I’m on the fence with this one myself people. I have to say, it doesn’t get any stranger than this.

WICHITA, Kans. (INTELLIHUB) — Youtuber DAHBOO777 posted a video recently which shows how an eight foot tall fence is being erected at a local Walmart store by what appears to be a contractor of some type.

“This is just the beginning stages of putting it up.”, DAHBOO777 said.

In the video the poles which may be as long as 9 feet can later be “topped off” with something else as DAHBOO777 points out.

Upon closer inspection of the video it appears the arrangement is set up for such configuration, but I can’t be sure. However if so you could quite possibly be looking at what will soon be an 8 to 9 foot tall barbed wire fence. But again I want to be clear I can’t confirm this aspect at this time.

In the video you can also catch a glimpse inside a few of the containers.

So what’s with the fence?

H/T: DAHBOO777 and his Anonymous source.