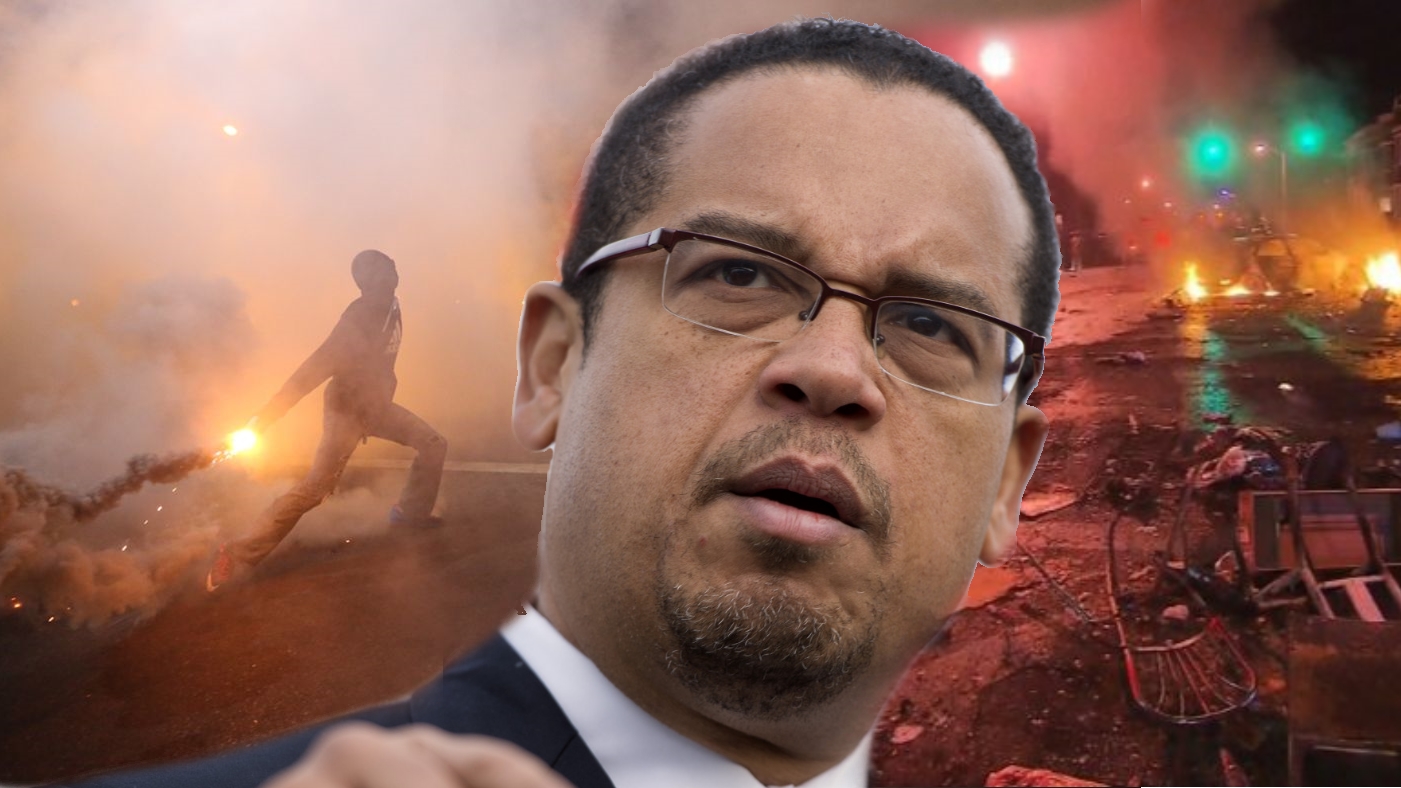 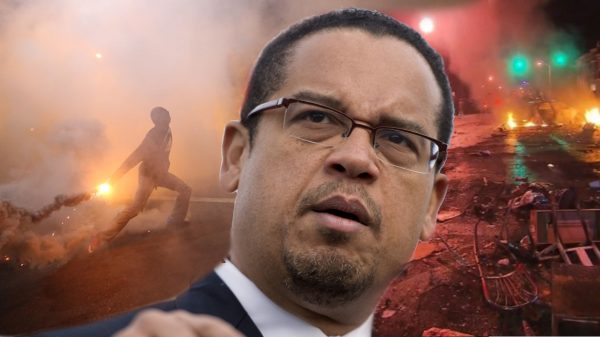 In the “after glow” of the riots in Baltimore, Minnesota Democrat and Muslim Rep. Keith Ellison seized on the anarchy to spew his Communist/Socialist rhetoric. Appearing on CNN Thursday, Ellison claimed that the poor are getting poorer because the rich are getting richer. It was the typical “never let a crisis go to waste” appearance.

Ellison issued this response to the CNN anchor’s question, “How do you explain what is going on in Baltimore this week?”

“Well, of course, excessive police officers and staggering unemployment go together, because what we’ve done in the United States, as we’ve said, that the affluent part of our society is going to demand more tax breaks, more wealth, more privilege, leaving less for the less fortunate, and the way we keep the less fortunate in control is through policing and prisons. That’s the unfortunate formula we constructed.”

Ellison needs to take a long hard look at Congress when making these statements. These “affluent” jackboots have been insider trading for years, increasing their own wealth while some have skirted paying “their fair share” of income tax. Congress has tremendous “privilege” that is not afforded the average citizen – impunity for wrong-doing – and has pushed for “zero tolerance” on so many issues that elementary school children are criminalized for eating pop-tarts into the shape of a handgun, leaving a classroom unexcused, and playing pranks on teachers.

Here’s another member of Congress who has no idea about the prison system; but, thinks that only the poor, less fortunate of society are housed behind a razor wire fence. There are plenty of inmates from middle-class backgrounds that have been incarcerated, along with some that have committed white collar crimes; but, Ellison’s comments are more code for “blacks” without saying it. Ellison ignores the militarization of law enforcement agencies across the country which results in all US citizens being treated in an aggressive manner by police, as it does not go along with the lie.

Ellison claimed that we, as Americans are “all connected.” In fact, Ellison commented that those who are making “good money” shouldn’t be making so much as that affects everyone else.

“We have got to say that, look, you can make good money, but do you have to make so much that the whole neighborhoods have nothing, and not even any hope? That’s the problem that we are facing right now.”

According to Ellison, people should not be allowed to earn money equivalent to the work they do or the education they obtain, or be paid in proportion to the fruits of their labors. He seems to think that one individual’s propensity for hard work diminishes someone else’s abilities. In essence, Ellison is saying that if one man works hard to earn good money that it takes away from another and an entire neighborhood.

It escapes Ellison that you get out of something what you put in it. There are individuals who are willing to take big risks for big returns; others are not. Each individual should be rewarded each according to their efforts. It is the “pursuit of happiness” pointed out so clearly in our Declaration of Independence. Again, this goes against the Communist diatribe Ellison is promoting.

The Muslim Democrat made sure to point out that Freddie Gray, along with Michael Brown, came from neighborhoods with high unemployment.

Ellison stated the answer to all of this was simple.

“You’ve got to make an investment, and our society has to decide, are we going to pay the police and prisons to keep the poor out of control, or we’re going to invest to include everybody in this economy?

“It starts with one, investing in the infrastructure. Investing in the educational opportunity there, raising minimum wage, making sure people can go to the doctor. I mean, we are – there is a big fight all across the country over minimum wage.”

When one hears the term “infrastructure,” most immediately think of roadways, bridges, dams, railroads, etc., which are in pretty poor shape in this nation. Investing in the infrastructure is a great idea as it is the means which provide Americans with goods. However, Ellison is not talking about the physical infrastructure, but the “social” infrastructure.

Ellison went on to talk about McDonald’s CEO making $9,000 an hour and not wanting to pay employees $15 an hour minimum wage. He identified paying only $7 or $8 an hour for working at a fast food restaurant while the CEO made $9,000 an hour as the heart of the problem. Of course, he had to point out the housing problem in the neighborhood where Freddie Gray lived. Ellison claimed Gray lived in a house with “excessive lead paint,” describing that as a hallmark of poverty. He stated that like thousands of kids in Baltimore and across the US, Gray had ingested it.

Ellison’s comments on “educational opportunity” almost makes one believe there are no government-run, free schools, aka indoctrination centers, nor is there a federal agency known as the Department of Education that has hijacked educational curriculum. Government schools are supported by taxpayer funds. Therefore, investment in lower education is already there. As far as any higher education is concerned, it is up to the individual to secure further education or training which means they would pay for that themselves – not be taxpayer funded. However, it would not be surprising if the government wanted to take control of “higher institutes of learning” just as they did the health care insurance agency.

Where is Ellison getting the information that people cannot go to the doctor? Are there places where certain people are being barred from going to see a physician? Everyone can go to a physician of their choosing at any time as long as they pay for the visit. Having access to a physician can be problematic in extremely rural areas. However, knowing the Communist mentality, this Muslim Democrat Communist is not referring to that situation. Ellison really means to say, “People are not getting free doctor visits.”

The fight over minimum wage and its effects – higher costs of items, layoffs, etc. – has been discussed over and over. Minimum wage jobs were never intended for individuals to use as permanent means of income. They were a stepping stone to other means of wage-earning or higher institutes of learning.

Naturally, Gray ingesting lead paint resulted in all of his problems. Can you even get lead paint? Wasn’t all lead paint to be removed in housing years ago? And why are parents letting their children lick and chew on the window sill? There are teething rings. If you can’t afford one, a cube of ice wrapped in a small washcloth works well.

Rep. Ellison’s point was that no one has the “right” to make money in proportion to their efforts or as he put it, “Can we stop saying that I’ve got to make $9,000 an hour?” According to Ellison, individuals considered wealthy should not have tax cuts, get a break on estate taxes or have the money to re-invest into their own adventures. Instead, that money should be “shared” with others and the neighborhood. He claimed people in these neighborhoods were “dehumanized” by the media resulting in Americans’ “lack of compassion” for their plight. Ellison stated that we all “need to care about” those individuals in America’s cities who are struggling to “make a life for themselves.”

It’s the old “wealth is a zero-sum game” rhetoric. Funny, Ellison sure is enjoying the high life there in Congress. He, along with his cronies, should set the example and refuse part of their over $100,000 a year paycheck. Why should anyone in Congress receive that much pay for “serving” the public? According to them, it’s justified because they have tremendous responsibilities, yadda, yadda, yadda. The McDonald’s CEO, evidently, has little responsibilities, as well as others who have worked hard, taken tremendous risks and invested heavily in themselves to earn a good wage.

Only in corrupt government does someone else becoming wealthy make others poor. It’s called “crony capitalism” – the government destroys industries and transfers wealth to their friends, their friends’ corporations and themselves. Another way to look at it is “Communism at its best” or the normal day to day operation in the District of Corruption.

It’s difficult to have sympathy for those groups who riot, loot, pillage and vandalize businesses and property that isn’t theirs. They are committing crimes, which is not protected under the “freedom of assembly” clause in the First Amendment, in response to some perceived wrong or injustice. These individuals have a choice; they made the wrong one. Ellison doesn’t grasp the concept of “personal responsibility” at all.

As far as viewing these individuals in a more “human” light, it would be a lot easier if they weren’t running around the streets acting like animals. My grandmother used to say, “If you’re going to act like a heathen, you’ll be treated like a heathen. Have some self-respect.” Baltimore “smack down” mom appears to agree with that.

Ellison, the opportunist that he is, cares not one iota about anyone or anything except advancing the Communist/Muslim agenda. It’s evident in his words. The problem is the number of people who will buy into it and push it. Then, when they get it, they will not be happy and wonder what the heck happened. Unfortunately, it will be too late. They will be slaving away for near-starvation rations. One only has to look at the former Soviet Union or the current North Korea regime to see it.