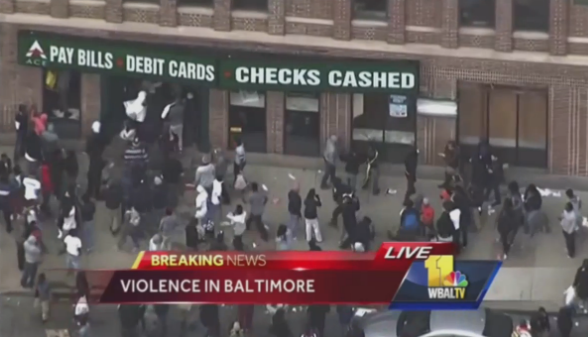 I am reluctant to start this article now, since so much of the Baltimore disaster is still unfolding. But I will try to document some of the facts, as far we know them, before they get swept under the rug of even more crucial events.

The Baltimore riot is a serious problem. That much we do know. Would I be too politically incorrect to call it a race riot? Probably, although from what we have seen on TV, virtually all the participants are African-Americans. But one would assume that in order to be considered a race riot, there would have to be one race pitted against another. That does not seem to be the case here, since the rioters are presumably protesting against the political power structure, which is almost entirely made up of liberal, Democrat, African-Americans — and has been for decades.

There has only been one Republican mayor (two terms) of the City of Baltimore since 1934, and the list includes both the father and brother of former Speaker of the House, Nancy Pelosi. Her brother, Thomas Ludwig John D’Alesandro III, also presided over the city during the last Baltimore uprising in 1968. So there has been no shortage of liberal Democrat leadership.

It is interesting to note that every elected government official, even those only remotely involved in this incident, has come down on the side of the protesters. That must be of little comfort to the residents and business owners of the community who have had their properties robbed, looted, and burned to the ground by those their elected officials are supporting.

First, there was Baltimore Mayor Stephanie Rawlings-Blake, who, in keeping with her “stand down” order to the police, is reported to have said, “Let Them Loot, It’s Only Property.”

Veteran Congressman Elijah Cummings, Ranking Member of the House Committee on Oversight and Government Reform, termed the unrest as “the civil rights cause of this generation.”

President Obama lays blame on the Republicans for having failed to spend enough money to lift the downtrodden out of poverty. The Republicans respond that over the past 50 years you Democrats have spent $22 TRILLION on LBJ’s war on poverty, and what do you have to show for it? Nothing.

The Revered Al Sharpton chimed in with a need for a national police force, and Filmmaker Michael Moore demanded that America’s police officers be disarmed and all African-Americans imprisoned for non-violent crimes be released. Presidential candidate Hillary Clinton seemed to agree, stating her own plan to put an “end to the era of mass incarceration.”

There was no public condemnation of the torching of the 144 automobiles, both public and private, the looting of dozens of businesses, and the wounding of nearly 100 Baltimore police officers—with more than 40 of them hospitalized.

The latest development, of course, is the charge of homicide by Maryland state prosecutor Marilyn Mosby against all six Baltimore police officers involved in the arrest of Freddie Gray, three of whom are African-Americans, including one African-American female. She even charged Officer Caesar Goodson, the driver of the paddy-wagon, who probably never even saw the cargo he was carrying, with second-degree depraved heart murder (whatever that is), which carries a maximum penalty of 30 years in prison. She concluded her press conference with the statement, “. . . to the youth of the city . . . this is your moment. . . you’re at the forefront of this cause and as young people, our time is now.”

Is she thus challenging the protesters with the admonition of author and artist Kara Walker, as referenced in President Obama’s autobiography, Dreams From My Father?

So where are we now. . . just waiting for the other shoe to drop? Probably.

Ms. Mosby’s broadside against the Baltimore Police Department evidently produced the desired results. There was jubilation in the streets following her announcement, rather than more looting and burning. That was probably her objective, but has she overplayed her hand? I am sure they are now scouring the Maryland countryside, shopping for a sympathetic judge to hear the cases. But has she gone so far with her preposterous charges that convictions will be impossible?

The protest leaders have already vowed, if convictions don’t follow the charges, then the destruction to come will be “100 times worse” than anything we have seen so far.

The answer? Quit making it too comfortable to just lie around, doing drugs, and complaining because others they see on TV are doing better. Of course there is poverty, relatively speaking, in the ghetto. Yet, I didn’t see many malnourished demonstrators the other night. Even the yellow-shirted “Mother of the Year,” looked pretty well fed to me! We must require able-bodied individuals to provide for their own upkeep, and thus make it necessary for them to acquire the skills necessary to justify employment and income in the free enterprise marketplace. It’s worked every time it’s been tried. It’s failed every time it hasn’t.