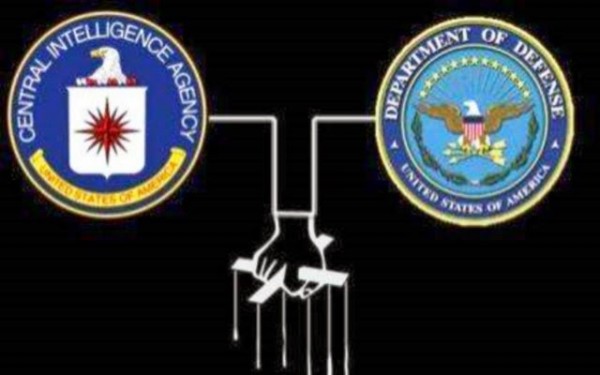 Have you ever wondered why President Obama is so willing to chase ISIS into Syria and risk war with Russia, but he allows an ISIS base camp to remain intact only 8 miles from El Paso?

Both this article and the subsequent interview will answer the aforementioned question while demonstrating how the U.S. is funding the very enemy we are supposed to be trying to destroy.  All is revealed in this “tell-all” in one of the most important interviews ever conducted on The Common Sense Show.

ISIS is funded by the CIA, so says Scott Bennett who is a U.S. Army Special Operations Officer (11th Psychological Operations Battalion, Civil Affairs-Psychological Operations Command), and a global psychological warfare-counterterrorism analyst, formerly with defense contractor Booz Allen Hamilton. He received a Direct Commission as an Officer, held a Top Secret/Sensitive Compartmentalized Information (TS/SCI) security clearance, and worked in the highest levels of international counterterrorism in Washington DC and MacDill Air Force Base in Tampa, Florida. He has developed and managed psychological warfare theories, products, and operations for U.S. Special Operations Command, U.S. Central Command, the State Department Coordinator for Counterterrorism, and other government agencies.

Bennett served in the G.W. Bush Administration from 2003 to 2008, and was a Social Science Research Fellow at the Heritage Foundation. His writings and lectures seek to enhance global awareness and understanding of modern psychological warfare, the international military-intelligence community, and global surveillance operations being artificially generated under the spectre of “National Security”.

The Message You Are Not Supposed to Hear

Scott Bennett was my guest on Sunday night, May 3, 2015, on The Common Sense Show. At least he was supposed to be my guest until both the servers and the live stream feeds, which are housed three thousand miles apart, were taken down by an unknown source. Fortunately, we were still heard by phone, but that was all. Scott Bennett is an expert on terrorism and the moment we got too deeply into the topic, somebody pulled the plug on our satellite provider, in multiple locations. However, the interview was preserved on our archives and is available for listening. What the bad guys must not realize that about 40 times more people listen to the archives than the live broadcast.

The net effect of taking down the bulk of our interview with Scott Bennett will be about the same as was NPR’s lame attempt to collectively disparage my reporting on Jade Helm. On May 3, my website analytics revealed that about 20,000 NPR readers actually came to The Common Sense Show website, directly from NPR, to take a look around because of the negative article. Thanks NPR and thanks to the people who attacked our show last night. As word spreads about how The Common Sense Show was attacked, the curiosity factor will double or triple our normal listenership. Thanks to NPR and the other would-be-assassins of the truth for helping our staff spread the truth partially through the law of unintended consequences.

Summary of the Interview

During the course of the interview, we spoke extensively on how 9/11 was most likely a CIA/Mossad operation and key written records were destroyed in two locations both at Building 7 and at the Pentagon. Had the financial records from either site ever been made public, this government would have been brought to its knees because of the massive financial corruption that would have been revealed.

We also spoke of Russian-American relations and the tragedy and needless rise of the new Cold War. Bennett stated our corporate greed and American hegemony has placed us in a position where we are now isolated from our allies and Europe is in the process of turning their collective backs on the United States in which Germany, for example, is likely to leave NATO and align with Russia.

Bennett has written extensively on the intelligence community’s surveillance activities addressed by Edward Snowden’s National Security Agency-Central Intelligence Agency materials; and since 2010, Bennett has filed numerous military-government whistle-blowing reports with Congressional Committees, including: the Intelligence, the Armed Services, the Government Oversight and Reform, Homeland Security, the Judiciary, the Foreign Affairs, the Banking, and the Terrorism Committees. He has communicated with over a hundred Federal representatives, Senators, senior military officers and Pentagon officials, and journalists about the scandalous abuses of power and deception being employed against the American people by its own military-intelligence community; and the most damning report brought into the public sector occurred when he filed legal action against Booz Allen Hamilton and the Department of Defense for their involvement in secret Swiss Bank Terrorist Finance Operations, in which he uncovered with the help of Union Bank of Switzerland whistleblower, Brad Birkenfeld a massive terrorist funding program.

We know that ISIS got its “beginnings” from U.S. military equipment deliberately left behind in Iraq. Bennett and I both agree that to leave unsecured weapons on a former battlefield was undoubtedly an intentional act because of the strict military protocols against such a practice. Again, he views ISIS, which is a hybrid terrorist organization, as the artificial creation of the CIA and the Mossad in a joint operation. Ultimately, chasing ISIS into Syria will result in Russian intervention and World War III. But first, we have to contend with ISIS on our doorstep, only 8 miles from El Paso. This is the quintessential false flag cover in which they hope to convince most of America to accept martial law out of ignorance to the role that the CIA, and its allies, will have played in the event. This parallels the letter I received from the Texas Ranger on the same topic in which he claimed that the Rangers are bracing for an attack by ISIS against targets in Texas.

Scott Bennett’s information is  so sensitive and so many careers and individual freedoms rest upon what he reveals, or keeps secret, there are many who would like to see him dead. Subsequently, Bennett has taken steps to insure his longevity.

Bennett is all too keenly aware of what was done to journalist Michael Hastings after he and Michael Isikoff (NBC News) began investigating Bennett’s reports and materials in relation to the Edward Snowden and Brad Birkenfeld connections (CIA-NSA-Swiss Banks-Booz Allen Hamilton-Terrorist Finance). The Birkenfeld, Swiss banking, connection is telling. Birkenfeld oversaw money placed in Swiss bank accounts which was then redistributed to terrorist organizations around the world. Subsequently, there are many who would like to see him dead. Bennett has taken steps to insure his longevity. Individuals have been killed for far less and Bennett issues the following warning on his website.

WARNING:      In the event of my untimely death, additional documents and materials will be immediately released which expose all previously undisclosed persons, networks, operations, and financial accounts relating to illegal foreign and domestic terrorism activities.  All materials have been safely uploaded to legal counsel.   Congress and Military authorities have been notified of this.

This interview has prompted me to issue my own warning:

WARNING: The leadership of our present administration is a criminal enterprise. They have completely forsaken their oath of office. Administration officials are guilty of violating every precept of the United States Constitution. They have engaged in massive lying to the American people, and have absconded with American taxpayer money in order to enrich their corporate and bankster benefactors. They will not hesitate to install a brutal form of martial law in which untold numbers of American citizens will lose their lives and they are practicing for this eventuality, right now, through Jade Helm. These criminals in suits will think nothing about sending our children off to war to die in order to increase the bottom line of the banksters. They will dress up this coming war as the patriotic thing to do. However, patriotism only serves to conceal the underlying and insatiable lust for power and wealth. This administration does not serve the needs of the people, we are its subjects and soon to be its slaves. Scott Bennett has only scratched the bare surface of how bad it is going to get here in the land of the free and the former home of the brave. I weep for the loss of my nation. Long live the King, the King is dead.

The interview with Scott Bennett can be heard by going to this link.  Scroll down to the date, May 3, and simply follow the prompts. The interview is housed in hour number one and hour number two.

If your media player is up to date, you may also listen to the interview through the following links:

DC Clothesline Editor’s Note: For those who have never heard of Scott Bennett, I think it is important to note that he has been a previous source of controversy. In 2011 he was accused of illegally possessing 10 firearms and 9000 rounds of ammo at MacDill AFB. He was also accused of being an impostor. As usual, I would suggest you do your own research and, by all means, take advantage of the above interview. Keep in mind that those who buck the establishment are often targeted unfairly. That’s not conspiracy. Lots of conservatives can tell you how they were targeted by Obama’s IRS, for example. This is the reality of America in 2015. If you speak up you can and will be silenced. Could Scott Bennett have been framed in 2011? If you answered “no” then you need to wake up. It’s not like he is currently rotting at Leavenworth or Guantanamo Bay. Think about that. -Dean Garrison, Publisher/Editor @ DC Clothesline