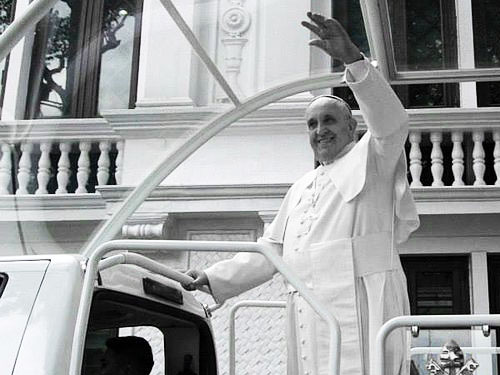 Can you imagine any way to bring a tumultuous world under a one world religion?

This is a good head start.

A few months back, former president Shimon Peres met with the Pope at the Vatican and proposed that the Pope head up a UN for religions.

But the main topic of conversation was Peres’s idea to create a UN-like organization he called “the United Religions.”

Peres said the Argentina-born pontiff was the only world figure respected enough to bring an end to the wars raging in the Middle East and elsewhere in the world.

“In the past, most of the wars in the world were motivated by the idea of nationhood,” Peres said. “But today, wars are incited using religion as an excuse.”

Vatican spokesman Fr. Federico Lombardi confirmed to reporters that Peres had pitched his idea for “the United Religions” but said Francis did not commit to it.

“The pope listened, showing his interest, attention, and encouragement,” Lombardi said, adding that the pope pointed to the Pontifical Councils for Interreligious Dialogue and for Justice and Peace as existing agencies “suitable” for supporting interfaith peace initiatives.

That meeting in September was the third in a four-month period. In an interview in the Catholic Magazine Famiglia Cristiana, Peres also called for the Pope to lead the inter-religious organization in order to curb terrorism: “What we need is an organization of United Religions… as the best way to combat terrorists who kill in the name of faith.”

Of all popes in recent history, Pope Francis has also embraced what have thus far been considered pretty “radical” views for the church, including everything from sexual ethics and and an open arms policy on gay rights to Darwinism. He even delivered a speech in March 2014 where he referred to Muslims as worshipping the “one God.”

If any pope was going to head up a one world religion, this one sure seems to tow every line.

Wasn’t there a bit in Revelations about a one world religion as a signal of the end times?