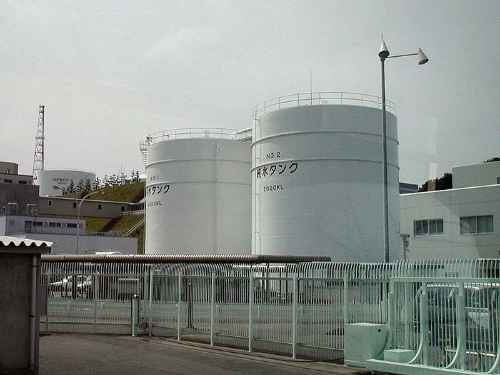 More than four years after a tsunami washed away the city of Fukushima, and damaged its nuclear plant beyond repair, TEPCO is still struggling to contain the radioactive materials within their facility. Japanese authorities are currently engaged in a truly sisyphean task when it comes repairing the plant, as it seems like every time they manage to secure a leak, another one pops up somewhere else. This happens so often that it’s barely covered by the news anymore, as the world slowly accepts its radioactive future.

TEPCO recently announced that they had discovered a small wet patch outside of a storage tank on May 1st. The 40 milliliter puddle is currently emitting 70 millisieverts per hour, and was found while staff were preparing to build a new frozen soil wall around the reactor. To put that in perspective, the average person is exposed to 3-6 millisieverts per year. This stuff is emitting several hundred thousand times more radiation than that.

Fortunately, this is only giving off beta radiation, which is much easier to contain than gamma radiation. They’ve successfully stopped the spread of the leak with a few sandbags, but it’s emblematic of a much wider problem. The water that is being used to keep the reactors cool is highly radioactive, and has been leaking into the water table for some time now. Given the numerous leaks and structural problems the plant faces on a regular basis, it doesn’t look like Fukushima will ever be secured in our lifetimes.