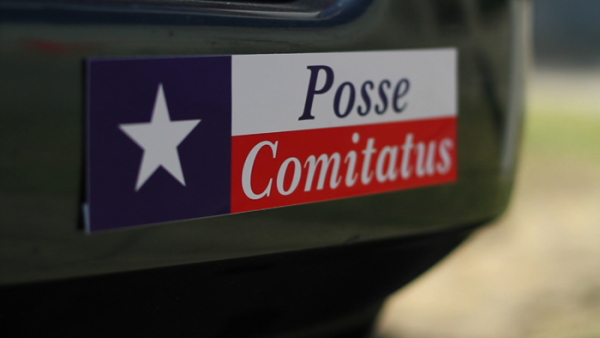 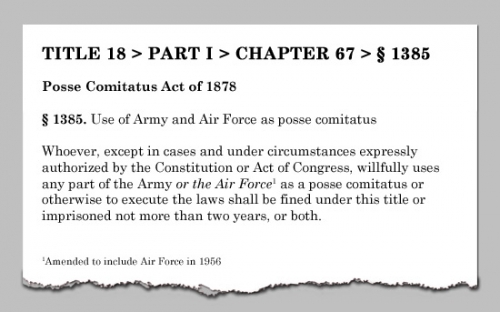 Described by the military itself as unprecedented in size and scope, Jade Helm has stirred much apprehension and fear in the alternative media community, with some saying it is both a preparation for and a prelude to martial law.

At the least, Jade Helm means U.S. military troops will be active (“conduct training exercises”) on domestic soil within the United States, which may be interpreted as a violation of the Posse Comitatus Act of 1878.

The term “posse comitatus” derives from the Latin posse comitatūs, which means “power of the community” in English use from the late 16th century. The original meaning of posse comitatus refers to a group of citizens assembled by the authorities to deal with an emergency (such as suppressing a riot or pursuing felons).

It is in the context of Jade Helm that the following guest post by FOTM’s Generation iYer Justin (aka threepercent1755), who served in the USMC for 5 years, is informative. (See Justin’s self-introduction here.)

What is Posse Comitatus? An FYI for our Readers

Posse Comitatus, more significantly known as The Posse Comitatus Act of 1878, limits the use of federal troops inside the United States (or CONUS in DoD speak). After the civil war, Union troops flooded the south as a police force, used to ensure former slaves were freed and had their rights as Americans. During the 1876 elections, the US soldiers were ordered to protect the rights of the black freedmen. While using the troops as a policing force would seem a great idea, it limited the accountability of the troops’ actions. The southern states claimed that instead of enforcing laws during the elections, federal troops refused admittance for southern voters or tried scaring them to vote for Republican in the most controversial election in our history. The south, to quell the debate over the presidency, allowed Hayes to win election without quarrel, but only with the passing of The Posse Comitatus Act of 1878.

While there is no documentation of these grievances that I could find, it strikes me as odd that the south would give up the presidency, such a powerful position, in trade to have the troops removed unless some sort of grievance existed.

So what exactly does Posse Comitatus establish?

The Act limits the use of the Army, and the Commander-in-Chief, from using the Army local and state law enforcement. It does not limit the National Guard from operating in home states or connecting states. (i.e. Ohio National Guard can be activated for Indiana enforcement if the Governor requests) This is also important in the case of Arkansas Governor Orval Faubus in 1957, when he refused to call the Arkansas National Guard with the 101st Airborne to prevent violence in the “Little Rock Nine” case. (http://law.justia.com/constitution/us/article-2/40-military-power-in-law-enforcement.html)

Without this limitation, it would be possible for the president to order the United States Army to do roadblocks inside the US, raid houses like SWAT, patrol the streets in HMMWVs (Humvee) and tanks, and even use military helicopters in assault or pursuit of perpetrators.

The reason I have been compelled to write is Operation Jade Helm 15. Many people incorrectly believe that it is a violation of Posse Comitatus for the military to train off of federal ground. While it may be disregarding other laws, it would only violate Posse Comitatus if the units were enforcing local or federal laws while they were in the area.

I recommend this article for Jade Helm: http://www.breitbart.com/texas/2015/04/28/army-tries-to-explain-operation-jade-helm-15-to-central-texas-community-they-say-no/

This post first appeared at Fellowship of the Minds.