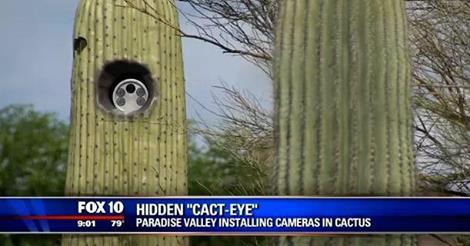 Residents not even informed of program, city officials refused to speak to media

The town of Paradise Valley in Arizona has installed license plate scanning cameras in fake cactuses with no public consultation whatsoever, just days after the DHS announced its intention to revive a nationwide version of the program.

Residents were alarmed to see the cactus cameras popping up throughout the town over the last few days with no indication of what they were being used for as city officials refused to explain their purpose until all the cameras were installed.

Town leaders initially declined to even talk to local station Fox 10 about the cameras, with Paradise Valley Police saying they were “not prepared to make a statement at this time.” The network was similarly rebuffed when they attempted to get answers on license plate scanners that were being installed in traffic lights back in February.

Fox 10’s Jill Monier was eventually able to speak to Town Manager Kevin Burke, who admitted that the cameras were being used to “run license plates of cars against a hotlist database.”

When asked why officials had been secretive about the cameras, which are being placed on the perimeter of the town, Burke asserted that there was “nothing to hide” and that the cameras wouldn’t be activated until privacy concerns had been addressed.

“Shouldn’t that have been vetted before they even went up?” asked Monier, to which Burke responded, “It probably is fair.”

The cameras are part of a $2 million “technology upgrade” passed by the council last year. It is not know whether the Department of Homeland Security contributed to this figure, although the DHS has funded the introduction of license plate scanners in other cities.

In February 2014, the DHS announced that it intended to create, “a nationwide database with information from license-plate readers that scan every vehicle crossing their paths,” a proposal that alarmed privacy groups.

The plan was subsequently canceled by Secretary Jeh Johnson, but the program has returned in a scaled back version which will collect data from “at least 25 states” and 24 of the 30 most populated metropolitan areas, reports the Hill.

After the license plate scanners were introduced in Philadelphia, city officials argued in a response to a request for information that, “every metro driver is under investigation,” reported TechDirt. In other words, the cameras treat everyone as guilty until proven innocent.

“Investigative reporter Dustin Slaughter and The Philly Declaration have been battling the city for access to two weeks of raw ALPR output and, after multiple appeals, have been told every scan is exempt because every scan is part of a criminal investigation. This bizarre claim echoes the Los Angeles Police Department’s public records request-thwarting declaration: all scans are, and always will be, tied to investigations.”

Back in March, Montana state lawmakers backed a bill that would ban license plate scanners, with sponsor Rep. Daniel Zolnikov arguing that the cameras were being used to “compile a massive database on every vehicle.”

In January it was revealed that the Justice Department had been building a secret domestic intelligence gathering program in concert with the Drug Enforcement Agency “that scans and stores hundreds of millions of records about motorists.”

The license plate scanner program was initially used near the border but has since been expanded “throughout the United States,” according to documents unearthed by the Wall Street Journal.

The American Civil Liberties Union subsequently revealed that the cameras were also using facial recognition technology to record who was traveling in the vehicle “as part of an official exercise to build a database on people’s lives,” reported the Guardian.