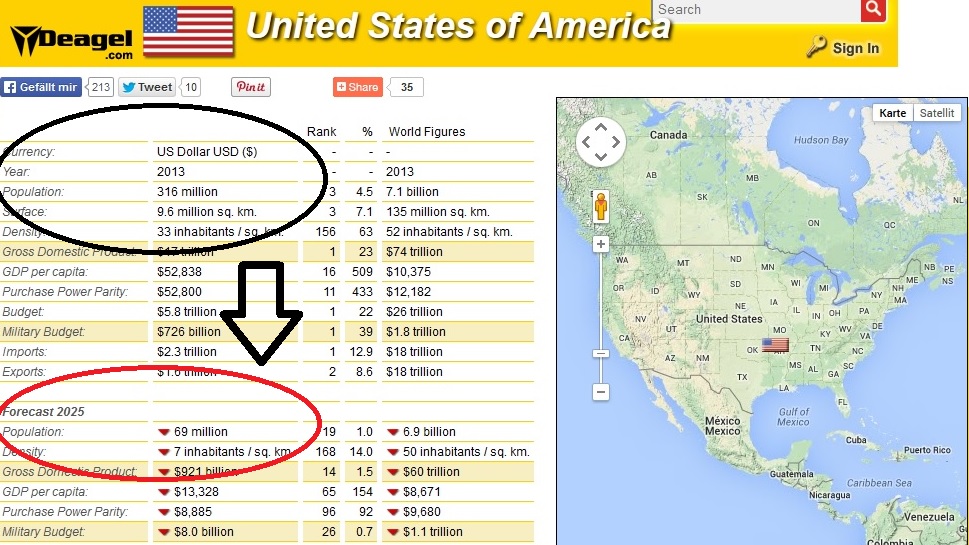 With economic malaise on the horizon and any number of triggers ready to set things into motion, military site Deagel.com recently posted their global forecast for 2025. The site, rumored to be a front for various alphabet intelligence agencies, says that America will soon see a large reverse migration as those who came here seeking riches and safety will emigrate out of the country following a serious, multi-year crisis.

According to the report the economy of the United States will dwindle from a GDP of $17.4 trillion today to just over $800 billion in the next 10 years – a decline of about 95% with respect to the goods and services produced within our own borders. Such a decline would be staggering, but it’s not the most ominous aspect of the report.

According to Deagel, the real concern is the adverse effects on our population, which is currently just under 319 million. If the forecast, which does not include the possibility of war or widespread pandemic in its analysis, is accurate then America may experience an event so massive that some 78% of our population would be wiped out, leaving just 68 million people living on American soil by 2025.

The key element to understand the process that the USA will enter in the upcoming decade is migration. In the past, specially in the 20th century, the key factor that allowed the USA to rise to its colossus status was immigration with the benefits of a demographic expansion supporting the credit expansion and the brain drain from the rest of the world benefiting the States.

The collapse of the Western financial system will wipe out the standard of living of its population while ending ponzi schemes such as the stock exchange and the pension funds. The population will be hit so badly by a full array of bubbles and ponzi schemes that the migration engine will start to work in reverse accelerating itself due to ripple effects thus leading to the demise of the States. This unseen situation for the States will develop itself in a cascade pattern with unprecedented and devastating effects for the economy.

Jobs offshoring will surely end with many American Corporations relocating overseas thus becoming foreign Corporations! We see a significant part of the American population migrating to Latin America and Asia while migration to Europe – suffering a similar illness – won’t be relevant. Nevertheless the death toll will be horrible. Take into account that the Soviet Union’s population was poorer than the Americans nowadays or even then. The ex-Soviets suffered during the following struggle in the 1990s with a significant death toll and the loss of national pride. Might we say “Twice the pride, double the fall”? Nope. The American standard of living is one of the highest, far more than double of the Soviets while having added a services economy that will be gone along with the financial system. When pensioners see their retirement disappear in front of their eyes and there are no servicing jobs you can imagine what is going to happen next. At least younger people can migrate. Never in human history were so many elders among the population. In past centuries people were lucky to get to their 30s or 40s.

The American downfall is set to be far worse than the Soviet Union’s one. A confluence of crisis with a devastating result.

With the predicted mass migration and drop in economic productivity will come other changes, according to Deagel. Military expenditures will drop significantly from $756 billion annually to $7.2 billion, and population density will drop from the current 33 inhabitants living per square kilometer to just 7 people taking up the same space ten years from now.

The report is certainly controversial, especially given that the source is unclear. The site claims to be a ‘Guide to Military Equipment and Civil Aviation’ that is maintained by private individuals who have no relationship whatsoever with the government. But some sources have reported that Deagel has done business in one form or fashion with various intelligence groups.

Thus, we publish this report with some hesitation and a healthy bit of skepticism, yet find it compelling enough given the current global environment that it may be of interest to readers.

The idea that a major depopulation event in the United States can happen as a result of a widespread crisis is a topic we’ve covered previously. The Center For Security Policy published a report in 2010 outlining the dangers posed by a targeted electro-magnetic pulse (EMP) attack against the United States. According to that report, which has been shared with Congress, up to 90% of Americans could die within a year:

And experts forecast if such an attack were a success, it effectively could throw the U.S. back into an age of agriculture.

“Within a year of that attack, nine out of 10 Americans would be dead, because we can’t support a population of the present size in urban centers and the like without electricity,” said Frank Gaffney, president of the Center for Security Policy.

Source: ‘Within One Year 9 Out of 10 Americans Would Be Dead’

An EMP threat is certainly a completely different set of circumstances than an economic collapse, at least initially. But as survival author James Rawles notes in his fictional, yet quite believable, account of economic collapse in his widely popular bookPatriots: A Novel Of Survival In The Coming Collapse, the notion that the economic system could break down to such an extent as to cause a major die-off in America is a distinct, albeit improbable, possibility.

In fact, the U.S. government has been training for just such a scenario in recent years, a concern highlighted by popular radio talk show host Mark Levin:

Though Deagel.com makes some seemingly outrageous claims in their 2025 Forecast, within this context the possibility of a major depopulation event begins to look more and more probable. 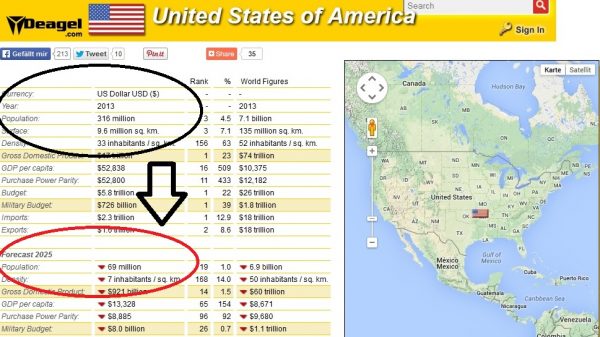