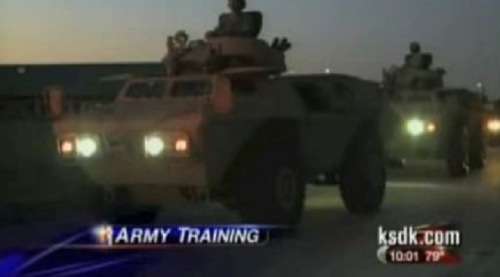 For two months beginning on July 15 to Sept. 15, 2015, élite members from all four branches of the U.S. military will launch a Special Operations exercise called Jade Helm 15 that even the military’s Army Special Operations Command admits would be unprecedented in its size and scope.

Some parts of the operational details have been disclosed, including the fact that there will be 1,200 troops participating, and according to CNN, “mainly Army Green Berets, but also a small group of Navy SEALS and Air Force special operations troops as well as conventional Army infantry.”

Command spokesman Lt. Col. Mark Lastoria said: “The nature of warfare is always changing and U.S. Army Special Operations Command’s mission is to make certain the Army’s various Special Operations Forces are trained, equipped and organized to successfully conduct worldwide special operations in support of our nation’s interests. Training exercise Jade Helm is going to assist our Special Operations Soldiers and leadership in refining the skills needed against an ever changing foreign threat.”

As reported by Dan Lamothe for The Washington Post, March 31, 2015, those elite service members will operate covertly among the U.S. public and travel in military aircraft. Jade Helm 15 will be conducted in Arizona, southern California, Colorado, New Mexico, Texas, and Utah.

The exercise has prompted speculation and fear that Jade Helm is a preparation and prelude for martial law. In particular, some have expressed alarm about this map (see below) for the exercise, verified by Washington Post to be legitimate. The map designates Texas, Utah, and southern California as “hostile” and New Mexico as “uncertain” territories for the purpose of the exercise.

The Washington Post points out that the military has routinely launched exercises in the past in which regions of the United States are identified as hostile for the purpose of training. Examples include:

DESPITE WASHINGTON POST‘S CONFIDENCE THAT JADE HELM 15 IS HARMLESS, WE THE AMERICAN PEOPLE DO HAVE REASONS TO BE CONCERNED.

To begin, the U.S. military is prohibited from intervening in domestic affairs by two laws:

1. Insurrection Act of 1807 governs the ability of POTUS to deploy troops within the United States to put down lawlessness, insurrection and rebellion. The laws are chiefly contained in 10 U.S.C. § 331 – 10 U.S.C. § 335. The general aim is to limit Presidential power as much as possible, relying on state and local governments for initial response in the event of insurrection.

2. Posse Comitatus Act of 1878 (PCA), a U.S. federal law (18 U.S.C. § 1385) passed after the end of Reconstruction on June 18, 1878, and updated in 1981 to refer specifically to the U.S. Armed Forces, makes unauthorized deployment of federal troops a punishable offense, thereby giving teeth to the Insurrection Act. The PCA does not apply to the U.S. Coast Guard (because the Coast Guard operates under the authority of the Dept. of Homeland Security instead of the Pentagon), nor does the PCA apply to the National Guard (because the National Guard is under state authority and can act in a law enforcement capacity within its home state or in an adjacent state if invited by that state’s governor).

We are told that the only exception to the deployment of U.S. military troops within the United States is provided under Section 4 of Article IV of the U.S. Constitution, which says:

“and [the United States] shall protect each of them [the States] against Invasion; and on Application of the Legislature, or of the Executive (when the Legislature cannot be convened) against domestic Violence.”

In other words, Article IV requires the U.S. government to protect each state from invasion and, upon the application of the state legislature (or executive, if the legislature cannot be convened), from domestic violence.

The reality, however, is more complicated than that.

A U.S. Army document called ATP 3-39.33, April 2014, provides more nuances to when and when not the Posse Comitatus Act is applicable.

This is what ATP 3-39.33 says under the section titled “Legal Considerations”:

2-4. For the U.S. Army, conducting civil disturbance missions within the United States will vary greatly when compared to conducting civil disturbance missions within a foreign country where the U.S. Army is conducting operations. Except as expressly authorized by the Constitution of the United States or by another act of Congress, the Posse Comitatus Act (18 USC 1385) prohibits the use of the Active Army as enforcement officials to execute state or federal law and perform direct law enforcement functions within CONUS.For OCONUS operations, especially when the HN does not have a legitimate government or law enforcement capabilities, the U.S. Army may have to perform these functions, including responding to civil disturbances and performing the tactics and techniques discussed in this manual.

2-6. Within CONUS, military operations would fall under the defense support of civil authorities (see ADP 3-28 and ADRP 3-28). Military support to law enforcement is one of two categories: direct and indirect support. When authorized by the Secretary of Defense, federal military forces may provide indirect support to law enforcement agencies; but support is limited to logistical, transportation, and training assistance except when emergency authority applies. State and territorial governors can use state National Guard forces for direct support to civilian law enforcement; however, such use is a temporary expedient and must be in accordance with state laws (see ADP 3-28).

2-7. The Constitution of the United States, laws, regulations, policies, and other legal issues limit the use of federal military personnel in domestic support operations. Any Army involvement in civil disturbance operations involves many legal issues requiring comprehensive legal reviews. However, federal forces are authorized for use in civil disturbance operations under certain circumstances. The following references pertain to the use of federal forces within the United States, therefore; commanders, staffs, and leaders must be familiar with, and adhere to, the parameters within them—

2-8. The Constitution of the United States provides two exceptions for which the Posse Comitatus Act does not apply. These exceptions are based upon the inherent right of the U.S. government to ensure the preservation of public order and to carrying out governmental operations within its territorial limits by force, if necessary. These two exceptions are—

2-9. Laws passed by the U.S. congress include four exceptions to the Posse Comitatus Act. With the first threelaws discussed below (10 USC 331–333) there is a prerequisite that the President must take personal action, including the issuance of a proclamation calling upon insurgents to disperse and retire peaceably within a limited time. The four exceptions, based on law are—

After reading the above on ATP 3-39.33, do you now have a clear, unambiguous understanding of when and when not the Posse Comitatus Act applies?

I don’t blame you. I don’t have a clear idea either!

But there’s a short-cut to all this which you will clearly understand. It’s a curious document by the Obama Pentagon, called the Department of Defense Instruction No. 3025.21 (or DODI 3025.21) of February 2013. Simply put, DODI 3025.21 throws out of the window all the carefully-made and carefully-worded exemptions to the Posse Comitatus Act.

In February 2013, the Department of Defense (DOD) unilaterally made a few subtle changes to a regulation in the U.S. Code titled “Defense Support of Civilian Law Enforcement Agencies” and in so doing, granted itself the authority to police America’s streets without obtaining prior presidential, state, or local consent, thereby upending a precedent that has been in place for more than two centuries.

The most disturbing part of the DODI no. 3025.21 begins on page 15: “Enclosure 3: Participation of DoD Personnel in Civilian Law Enforcement Activities.” On page 16, under Section 1b’s “Permissible Direct Assistance” is a subsection (3), which states:

When permitted under emergency authority in accordance with Reference (c), Federal military commanders have the authority, in extraordinary emergency circumstances where prior authorization by the President is impossible and duly constituted local authorities are unable to control the situation, to engage temporarily in activities that are necessary to quell large-scale, unexpected civil disturbances because:

Jed Morey of the Long Island Press cites Bruce Afran, a civil liberties attorney and constitutional law professor at Rutgers University, who calls the DODI rule, “a wanton power grab by the military,” which is “quite shocking actually because it violates the long-standing presumption that the military is under civilian control.”

As Afran puts it, “These phrases don’t have any legal meaning. It’s no different than the emergency powers clause in the Weimar constitution [of the German Reich]. It’s a grant of emergency power to the military to rule over parts of the country at their own discretion.”

Afran also expresses apprehension over the government’s authority “to engage temporarily in activities necessary to quell large-scale disturbances.” “Governments never like to give up power when they get it,” says Afran. “They still think after twelve years they can get intelligence out of people in Guantanamo. Temporary is in the eye of the beholder. That’s why in statutes we have definitions. All of these statutes [DODI] have one thing in common and that is that they have no definitions. How long is temporary? There’s none here. The definitions are absurdly broad.”

Afran reminds us that, unlike the military, “the police operate under civilian control. They are used to thinking in a civilian way so the comparison that they may have some assault weapons doesn’t change this in any way. And they can be removed from power. You can’t remove the military from power.”

Jed Morey concludes: “for the first time in our history the military has granted itself authority to quell a civil disturbance. Changing this rule now requires congressional or judicial intervention. […] As we witnessed during the Boston bombing manhunt, it’s already difficult to discern between military and police. In the future it might be impossible, because there may be no difference.” (See “Boston Bombing: Getting the sheeple used to the police state”)

On April 28, Texas governor Greg Abbott ordered the Texas State Guard to monitor Jade Helm’s operation, declaring, “During the training operation, it is important that Texans know their safety, constitutional rights, private property rights and civil liberties will not be infringed.”

FOTM readers have asked what the name “Jade Helm” means. According to this YouTube video, it means Joint Assistant for Development and Execution [of the] Homeland Eradication of Local Militants: