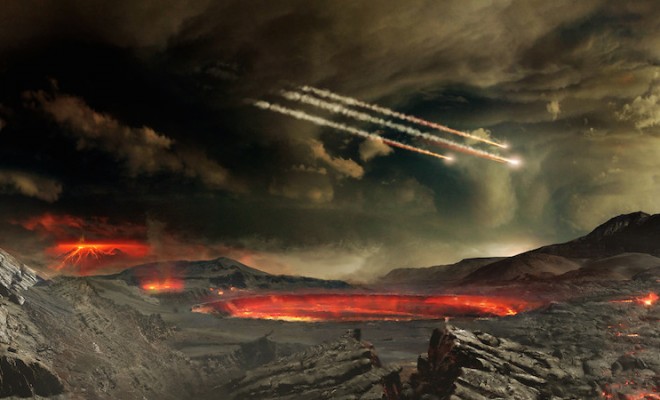 PAST DUE — IS IT POSSIBLE TO AVOID THE UNAVOIDABLE?

(INTELLIHUB) — Any truth to the rumors? You decide.

In Earth’s last 540 million years over fifty percent of the animal species on the planet have been wiped out at least 5 different times from a mass extinction event, according to research posted on Wikipedia.

If true, it just goes to show one how frail life on this planet really is.

After all, as it sits in 2015 there are 16,306 endangered species threatened with extinction and more species facing extinction each year as man has literally destroyed the planet in a certain sense.

And, as you may know, it’s no secret that we are long overdue for an extinction level event (ELE). Whether it’s from a nuclear war, a supervolcano eruption, or an asteroid impact, technically speaking, our days are numbered.

For the last 9 months or so I have heard chatter and rumors from people amongst the YouTube community who say that there is an impending asteroid strike off the coast of Venezuela this coming September.

I guess you could say that religious people would view such an event as the opening of the sixth seal in biblical translation.

And let me say here and now that I am not saying this, I am merely reporting on a few people who are. I am simply informing you on what is going on in sects of the YouTube community as well as in the media.

Apparently, according to WAPTek2 on YouTube, Pastor Lindsay Williams was the initial source of the information regarding the doomsday asteroid and based his claims solely on bible scripture.

“Here is where it gets crazy. The person doing this has no experience whatsoever in determining any of this and didn’t predict anything else going on.”, WAPTek2 said in a video posted Jan. 17, 2015.

However, I myself have not yet been able to verify this claim and so far have not determined Lindsay Williams to be the original source.

The Russian Space Agency recently discovered a planet killer asteroid known as 2014 UR116 that, “is not yet on a collision course with earth,” according to a video report from RT.

“The danger is as it passes near planets and the sun gravity could alter its path, pushing it directly at us,” said the RT host.

THE DEFLECTION PLAN — IS THERE SUCH A THING?

If such an asteroid, a planet killer, were to make its way directly toward the planet NASA and the U.S. Government actually have plans to deflect it and in fact have already drilled on such an event April 13-17, 2015, using fictitious scenario data.

The scenario went as follows:

Several months after the discovery of 2015 PDC, the probability of impact in 2022 will have risen to a concerning level. Even if the asteroid is more likely to miss our planet than to hit, mission designers will be asked to study the possibility of deflecting the asteroid, just in case it really is necessary. Arguably the fastest and simplest way to deflect an asteroid is to use a Kinetic Impactor (KI) to hit the asteroid and deflect it off course. Although this app was not designed to be an operational tool for developing such a mission design, it could be used to answer some of the basic questions about deflecting this asteroid.

How much velocity change would be needed?
Which deflection direction works best?
Could a single KI spacecraft do the job?
When would it have to be launched?
How much do the physical properties of the asteroid affect the deflection?

All of this was done in conjunction with the Planetary Defense Conference which also took place April 13-17, 2015.

Moreover it has already been pointed out by a Russian higher-up, Vladimir Zhirinovsky, head of the Russian Liberal-Democratic Party, that the U.S. tested such a deflection campaign on the Chelyabinsk meteor on Feb. 15, 2013 when they fired “a new weapon”.

After hearing about the rumors on the Internet of a possible impending asteroid strike allegedly set to take place sometime on or around Sept. 23, 2015, Youtuber Montagraph made a few shocking discoveries which had to do with the 1998 film Deep Impact.

Upon closer review of the film, which by the way depicted the President of the United States (POTUS) as a black man, Montagraph uncovered a new can of worms for conspiracy theorists to chew on to say the least.

“If you look in that movie there is a scene where the reporter that is going to break this ELE story and such, to the public, she looks over her shoulder upon cases and cases of a drink called Ensure. Look up the definition of Ensure, please do. Yeah and on those boxes of Ensure is a number 00701. If you run that into a zip code search oddly enough 00701 comes up for […] Puerto Rico.”

Additionally Montagraph also discovered that “coordinates” from the potential asteroid impact site on Deep Impact brings you “right off the coast of Venezuela”, near Puerto Rico.

Montagraph also talks about the alleged asteroid that is supposed to impact off the coast of Puerto Rico which would likely cause a massive tsunami devastating the coastlines as NASA previously warned their personnel about.

[…] is that all a coincidence? I don’t believe it is, said Montagraph, going on to mention how the “New York Fed moved from New York to Chicago,” away from the coastline, raising red flags.

To boot the highly suspicious military exercise dubbed JADE HELM 15, starting in June, ends Sept. 15, making some wonder if the rumors have any validity as the exercise would allow foreign and domestic military units to preposition themselves throughout large swaths of the U.S. for a potential impending disaster in which COG (Continuity of Government) would then be activated.

So I ask again: is it possible to avoid the unavoidable?

Is it worth looking into an asteroid bugout plan?