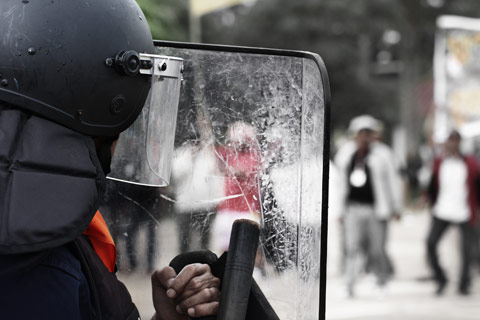 But how is this possible, given that tens of millions are out of the workforce, on food stamps and completely broke?

The answer, according to Gregory Mannarino, is quite simple. The world’s central banks and governments have been left with no other option. They are throwing absolutely everything they can at the problem in an effort to keep the system propped up for as long as possible.

But as Mannarino notes in his recent interview with Greg Hunter’s USA Watchdog, it’s nothing more than a setup that will leave most of the world’s population, especially the middle class in first-world countries, totally wiped out and impoverished.

The end result will be nothing short of widespread civil unrest, violence and bloodshed as people begin to realize they have nothing left and have no ability to acquire even the most basic of essential resources.

This is where we are now… something has to give… we continue to see more bad economic news being spewed even out of the mainstream but the stock market keeps going up… housing keeps going up.

This is a setup for a massive downside move with asset prices which have been distorted and continue to be by world central banks.

The Federal Reserve is trying desperately to remain credible to this market… to make it seem they are in control… they are absolutely not in control… the world central banks are so desperate now to keep the system propped up they have literally turned the financial system upside down… You have central banks that have gone negative [with interest rates]. This is not the way the system was designed to work.

Their alternative is that they have no alternative. If they stop doing this… if they were to start tightening monetary policy the entire system will come down… the whole thing is teetering on an edge… all we need is one event to push this over.

They are going to throw everything they can at it to keep it going… because the alternative is too horrible to contemplate.

The world will become Baltimore when the debt bubble bursts… Every street and every nation around the world is going to become Baltimore as people realize that they cannot acquire these basic assets and everyone is struggling for these resources.

They understand this… This goes back to why the police are militarizing every state in the Union… why we are one nation under surveillance.. they understand where this is going.

… We are clearly moving towards a two-tier society… the middle class, when this is over, will not exist.

When the trigger is finally pulled the majority of people will be left confused, panicked and angry. While we can’t predict the exact nature of the coming crises, we can look to history for direction. Currencies will likely crash, debt-based assets like home prices will collapse, and critical resources like food and energy will skyrocket in value to such an extent that they will become unattainable for most.

It is for this very reason that the US government and military have been simulating economic collapse scenarios, the fall out, and how to respond. And if recent riots in Ferguson and Baltimore are any guide, the situation will quickly devolve into looting and violence.

Tess Pennington, author of The Prepper’s Blueprint explains how such a scenario might play out in real-time:

Some of these citizens are prepared and ready for what may come and may feel the need to stay to defend what is rightfully theirs but the majority of the population will not be ready for what they are about to endure. Those that are in this unprepared majority who choose to ride out the disaster do so because they are either unaware of how to fully prepare for disasters, have become complacent or numb to the heeds of warning from the local government and news media, or are overly confident.

This is the point in this cycle where herds of people go to the grocery stores frantically grabbing supplies. Most grocery stores will not be able to meet the demand of the people’s need for supplies, and many could go home empty handed.

Bracing for the disaster, the prepared and unprepared will be hoping for the best outcome. What many do not realize is the hardest part of this event is soon to be upon them. Within days, the descent into the breakdown will begin.

Full Article: The Anatomy of a Breakdown

In response to the panic, the government will, as we’ve seen in Baltimore, initially react with curfews and a heavy police presence. When this is not enough, they’ll declare martial law and enforce it with the military.

Those who fail to prepare by stockpiling those critical resources like long-term food stores and other emergency supplies, will be left to fend for themselves on the streets of America.