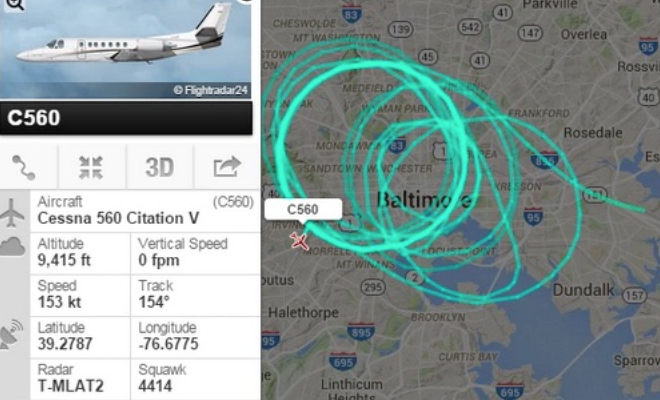 (INTELLIHUB) — A curious Twitter user who saw a low flying plane looping over West Baltimore has gone on to help reveal that the FBI was conducting aerial surveillance over parts of Baltimore with at least two planes.

Benjamin Shayne was listening to a baseball game in his backyard when he spotted the plane and decided to question it on Twitter. This lead others to not only identify the spy plane but break open the entire operation, leading to mainstream news coverage and subsequent confirmation by the FBI.

“Flight records maintained by the Web site Flightradar24 show two Cessnas — one a propeller plane, the other a small jet — flying precise formations over the part of West Baltimore where the rioting had occurred. The smaller Cessna conducted flights in the area on Thursday, Friday and Saturday, always after dark, reported the Washington Post.

The exact reach of the infrared technology is not clear. Civil libertarians have long warned that the ability to track the movements of individuals — even if their names are not initially known — can allow authorities to identify people, intruding on personal privacy and chilling the constitutionally guaranteed freedom of association.”

At least one of the planes was found to be owned by a company in Bristow, NG Research. The company has claimed they were not involved with the flight.

“A lot of these technologies sweep very, very broadly, and, at a minimum, the public should have a right to know what’s going on,” Jay Stanley of the ACLU told the Post.

Radio show host and independent journalist Pete Santilli arrived in Baltimore shortly after the protests begin and apparently witnessed several anomalies in the aftermath of the riots.

A description on the video read, “Pete Santilli & Deborah Jordan travelled to Baltimore and witnessed several anomalies during the aftermath of civil unrest in Baltimore. Despite the relative low number of vandalism & violence incidents, there was a strong presence of surveillance aircraft including blimps, drones and planes over the almost million people in Baltimore. Overkill; to say the least.”

During his live stream reporting from Baltimore, Santilli also noted multiple times that he had seen a surveillance blimp and that a stingray was in use.

For their part, the FBI originally refused to comment on the spy planes but has now been forced to confirm that they were indeed run by the Bureau at the request of the Baltimore Police Department.

In a statement provided to the Baltimore Sun, the FBI tried to downplay the surveillance with the ludicrous claim that the planes didn’t spy on anyone legally using their first amendment right.

“The aircraft were specifically used to assist in providing high-altitude observation of potential criminal activity to enable rapid response by police officers on the ground,” Thoreson said. “The FBI aircraft were not there to monitor lawfully protected first amendment activity.”

In February 2014, the Washington Post reported on the new technology that has now been documented in use against first amendment protected protests.

As Americans have grown increasingly comfortable with traditional surveillance cameras, a new, far more powerful generation is being quietly deployed that can track every vehicle and person across an area the size of a small city, for several hours at a time. Although these cameras can’t read license plates or see faces, they provide such a wealth of data that police, businesses and even private individuals can use them to help identify people and track their movements.

Already, the cameras have been flown above major public events such as the Ohio political rally where Sen. John McCain (R-Ariz.) named Sarah Palin as his running mate in 2008, McNutt said. They’ve been flown above Baltimore; Philadelphia; Compton, Calif.; and Dayton in demonstrations for police. They’ve also been used for traffic impact studies, for security at NASCAR races and at the request of a Mexican politician, who commissioned the flights over Ciudad Juárez.

Defense contractors are developing similar technology for the military, but its potential for civilian use is raising novel civil liberties concerns. In Dayton, where Persistent Surveillance Systems is based, city officials balked last year when police considered paying for 200 hours of flights, in part because of privacy complaints.

The Supreme Court generally has given wide latitude to police using aerial surveillance as long as the photography captures images visible to the naked eye.

We now find ourselves in a new technological Orwellian nightmare, complete with FBI spy planes, cameras on every corner, and a police force readying for war with the American people. The FBI will surely use the violence in Baltimore as an excuse to use the spy planes but this line of thinking is exactly what has allowed the rise of the surveillance state in the wake of 9/11.

No amount of security is worth giving up our god given freedom enshrined under the Constitution.