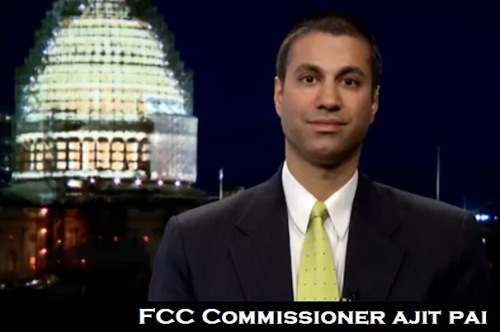 Ajit Pai is one of two Republicans on the board of the Federal Communications Commission (FCC), and he’s warning that the federal government will use net neutrality to censor political content on websites. That, of course, is a violation of the American people’s right of free speech that’s guaranteed by the United States Constitution.

For his warnings, Pai has received threats to him and his family.

Rudy Takala reports for CNS News that speaking on a panel at the annual “Right Online” conference in Washington, D.C., on Saturday, May 2, 2015, FCC member Ajit Pai said he foresees a future in which federal regulators will seek to regulate websites based on political content, using the power of the FCC or Federal Elections Commission (FEC).

Pai also revealed that his opposition to “net neutrality” regulations had resulted in personal harassment and threats to his family:

“I can tell you it has not been an easy couple of months personally. My address has been publicly released. My wife’s name, my kids’ names, my kids’ birthdays, my phone number, all kinds of threats [have come] online.”

Pai, one of two Republicans on the five-member FCC, has been an outspoken critic of net neutrality regulations passed by the agency on Feb. 26. The rules, which are set to take effect on June 12, reclassify Internet providers as utilities and command them not to block or “throttle” online traffic. But Pai said:

“I could easily see this migrating over to the direction of content… What you’re seeing now is an impulse not just to regulate the roads over which traffic goes, but the traffic itself. It is conceivable to me to see the government saying, ‘We think the Drudge Report is having a disproportionate effect on our political discourse. He doesn’t have to file anything with the FEC. The FCC doesn’t have the ability to regulate anything he says, and we want to start tamping down on websites like that’…. The First Amendment means not just the cold parchment that’s in the Constitution. It’s an ongoing cultural commitment, and I sense that among a substantial number of Americans and a disturbing number of regulators here in Washington that online speech is [considered] a dangerous brave new world that needs to be regulated.”

In February, Pai co-authored an editorial with former FEC Chairman Lee Goodman that warned of efforts by those agencies to regulate content online.

In comments to CNSNews.com, Pai also talked about the FCC’s finances, the imposition of taxes on Internet usage, and subsidies for Internet service.

Internet tax: The reclassification of Internet providers as utilities allows the FCC to impose a “Universal Service Fund” (USF) tax on their revenue.The USF has grown exponentially in recent years, and presently stands at $12 billion annually – so large that the FCC has requested it be allowed to transfer $25 million of the money to its own budget to “administer” the fund. As a result, some in Congress have proposed limiting the size of the USF to $9 billion. Pai said the USF tax “should be lower than what a majority of the FCC wants it to be… Whatever it is, there has to be a cap. What we’ve found is that USF funding has exploded over the past couple of years so that the USF tax is 67 percent higher than it was in 2009.”

Welfare programs of phone and Internet subsidies: Those USF taxes are being used to fund government programs such as the Lifeline program (commonly known as the Obama Phone program) and the E-Rate program that subsidizes broadband access for schools and libraries.

And the government wants to expand those programs, which means even higher USF taxes.

Pai is in favor of reducing the budget of the FCC:

“We should deny funding for some of the things the FCC wants to spend money on. Any funds, for example, to enforce these net neutrality regulations, [and] this shift of $25 million from the Universal Service Fund to the FCC itself in order to pursue its own policy priorities – I think we need to do more with less. I don’t think we’re doing that by asking for a much higher budget.