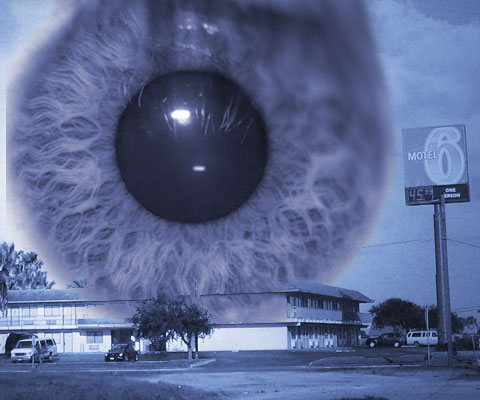 The motel and hotel industry is not only spying you, it is partnering with police.

This isn’t just routine cooperation when police request information for criminal investigations. Instead, it is apparently everyday data sharing on every guest.

It is a troubling private-public overlap where motel and hotel clerks are systematically sharing “do not rent” lists and helping police to run checks on guests daily for outstanding warrants. Staying at Motel 6, and other chains pursuing similar policies, now includes a hidden guilty-until-proven innocent background check that puts ordinary travelers one step away from a call to police. From the Providence Journal:

City police have arrested four people staying at the Motel 6 on Jefferson Boulevard as a result of the hotel chain’s agreement to provide police with a daily guest list, Mayor Scott Avedisian said Tuesday.

The names of Motel 6 guests, which police then check for outstanding warrants, is one of five steps Motel 6 corporate managers agreed to take in response to a string of high-profile incidents and concerns the establishment was becoming a haven for passing criminals.

The other measures listed in an agreement Motel 6 executives signed Tuesday include raising the minimum age to rent a room from 18 years old to 21, hiring a police detail every night, sharing their national “do not rent list” with police and conducting regular training, including on how to spot human trafficking.

“We know everyone who is staying in the hotel tonight,” Avedisian said in a phone interview after a meeting with Motel 6 executives that also included Warwick police chief Col. Stephen M. McCartney and Seekonk, Mass., Town Administrator Shawn E. Cadime.

CopBlock sums it up more bluntly:

The popular hotel chain, Motel 6, has recently decided to partner with the police to violate the rights of their guests. Without the consent of the guest, or even informing them whatsoever, Motel 6 employees will now turn over the guest information to the police, who will then run a background check on the subject.

And, as a policy, the motel chain is not even bothering to inform guests at check-in. They are not told about the hidden layer of screening – yet they are subjected to it.

As of now, guests who check-in at Warwick’s Motel 6 will not be told their names are on a list that goes to the police station every night.

Alerting motel guests that local police know their whereabouts “is not a normal process of our check-in,” said Victor Glover, a vice president of safety and security for G6 Hospitality, the parent company for Motel 6.

Cue the predictable excuses: “If you aren’t doing anything wrong, you have nothing to hide.”

Of course, virtually the same thing has been going on between the NSA and Internet/telecommunications companies, with the latter willingly handing over data on its customers for intelligence processing at the expense of individual civil rights and customer trust.

While this type of pre-crime screening for authorization may seem like a worthwhile way to flush out criminals, but the acceptance of the guilty-until-proven mindset is allowing this to pop up with lists operating throughout society as “do not fly” lists do with airports.

Then White House Chief-of-Staff and current Chicago mayor Rahm Emanuel argued for a “no buy” gun list that would operate similar to the “no fly list.” Other sectors of society are using credit reports and social media profiles to flag would-be suspects, risky lenders and consumers.

And despite what you may be thinking, not everyone on these lists is actually a criminal, potential terrorist or offender. In fact, there is way too much room for abuse and political tyranny. With enough time to blossom, these data lists will make second class citizens out of large sectors of the population.

In the decade following 9/11, countless news reports surfaced about people with clean records being barred from travel because their name matches or is similar to an actual suspect. Many such people were put on the list simply by mistake, or through ulterior motives by those working the system.

In any case, these people have little recourse for getting off the lists. Cases surrounding airport “no fly lists” have left many people frustrated at civil rights violations that judges have been unable or unwilling to strike down.

The police state is here, and it is growing darker every second through the vast accumulation of personal data. Is anyone willing to stand up and saying no to it?