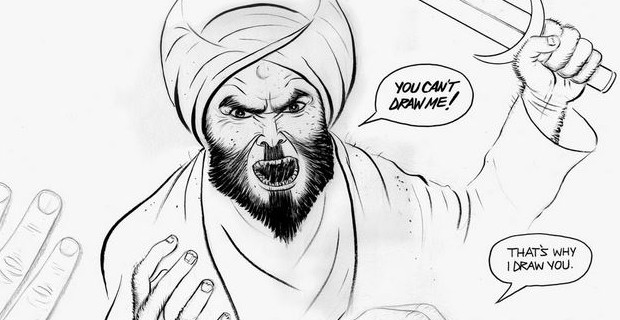 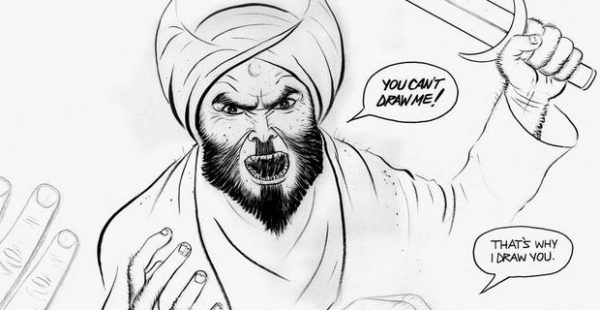 The winner of the Muhammad art contest in Garland, Texas that was attacked by gun-wielding jihadists on Sunday was sensationally banned by Facebook, before his account was restored after vociferous complaints.

Bosch Fawstin, whose winning entry depicts a caricature of Muhammad shouting “You can’t draw me,” tweeted that he had been “removed from Facebook” yesterday.

Supporters responded by uploading images of the drawing as their Facebook profile background image.

For months we have been warning that Facebook’s new policies allow for groups of individuals to flag for deletion posts and images which “annoy” them or they find offensive. There is also an option to flag a post for deletion if it “goes against my views” or content which users find “distasteful”.

This allows perfectly legitimate content to be censored by mobs of perpetually offended morons who hold differing political opinions.

As we highlighted yesterday, the Alex Jones Facebook account was also temporarily suspended over an image of an ISIS militant that couldn’t even be considered offensive by any stretch of the imagination.

Ever since the attack, Pamela Geller and other individuals involved in staging the art contest have been vilified by many sectors of the media, with the press blaming the victims of the attack rather than standing up for the First Amendment.

Fawstin was also placed on a ‘hate list’ by the leftist Southern Poverty Law Center, which itself has served as an inspiration for unhinged would-be terrorists.

The immediate response from several media outlets in the aftermath of the Garland attack was to kowtow to extremists by censoring images of other artwork displayed at the event instead of defending freedom of expression.

Facebook’s decision to restore the account is the right one, but their policy of allowing mobs to flag content with “offends” them and have that content automatically deleted surely needs to be reconsidered after this incident.