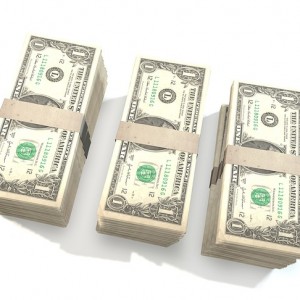 Did you know that 89 percent of all minimum wage workers in the United States are not teens?  At this point, the average age of a minimum wage worker in this country is 36, and 56 percent of them are women.  Millions upon millions of Americans are working as hard as they can (often that means two or three jobs), and yet despite all of their hard work they still find themselves mired in poverty.  One of the big reasons for this is that we have created two classes of workers in the United States.  “Full-time workers” are entitled to an array of benefits and protections by law that “part-time workers” do not get.  And thanks to perverse incentives contained in Obamacare and other ridiculous laws, we have motivated employers to move as many workers from the “full-time” category to the “part-time” category as possible.  It may be hard to believe, but right now only 44 percent of all U.S. adults are employed for 30 or more hours each week.  But to get any kind of a job at all is a real challenge in many parts of the country today.  As you read this article, there are more than 100 million working age Americans that are not employed in any capacity.  And according to John Williams of shadowstats.com, if the federal government was actually using honest numbers the unemployment rate would be sitting at 23 percent.  That is not an “employment recovery” – that is a national crisis. 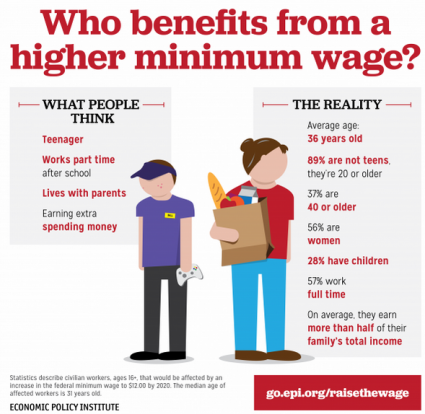 So what is the solution to this problem?

Most Democrats believe that raising the minimum wage would fix this.  But as Zero Hedge has pointed out, it isn’t quite that simple…

Last week, we noted that Democratic lawmakers in the US are pushing for what they call “$12 by ’20” which, as the name implies, is an effort to raise the minimum wage to $12/hour over the course of the next five years. Republicans argue that if Democrats got their wish and the pay floor were increased by nearly 70%, it would do more harm than good for low-income Americans as the number of jobs that would be lost as a result of employers cutting back in the face of dramatically higher labor costs would offset the benefit that accrues to the workers who are lucky enough to keep their jobs.

Yes, raising the minimum wage would make life better for many minimum wage workers in America.  But a large number of them would also lose their jobs completely, and a lot of small businesses would deeply suffer financially.

Ideally, what we would love to see happen is for the U.S. economy to be producing so many good jobs that the only people that are looking for entry-level part-time jobs would be teens, people just starting out in the workforce, etc.  Back when I was a teen, I remember walking into a McDonald’s and getting hired on the spot because they were in dire need of workers.  Sadly, those days are long, long gone.

Thanks to the foolishness of our politicians, there is now intense competition even for minimum wage jobs at this point.

We keep hearing about an “employment recovery”, but it is a giant lie.  Posted below is a chart of the civilian employment to population ratio.  As you can see, the percentage of the working age population that is actually employed is much, much lower than it used to be… 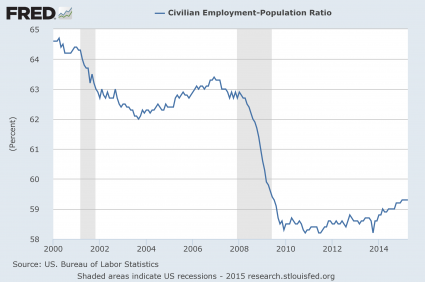 In recent months, we have seen the employment-population ratio move slightly higher.  But can this be called “an employment recovery”?  Of course not.  We are still way, way below the level that we were at just prior to the last recession, and now the next recession is just about upon us.

Meanwhile, the quality of our jobs continues to decline as more Americans are being pushed into “part-time work” with each passing year.

Since February of 2008, the size of the U.S. population has grown by 16.8 million people.  But during that same time frame, the number of full-time jobs in this country has actually decreased.

And at this point, the majority of American workers simply do not make enough money to support a middle class family.  The following income numbers come directly from the Social Security Administration…

Are you starting to see why I am so fired up about all of this?

We have developed a business culture in this country which does not care about workers.  In business schools all over America, future executives are taught that a corporation only has one goal – to maximize wealth for the shareholders.  Taking care of those that are part of your team is treated as an afterthought at best.

As corporations have gotten bigger, they have shown less and less concern for those that work for them.  These days, employees are generally regarded as “expensive liabilities” that are to be discarded the moment that their usefulness has come to an end.  And news of layoffs is often rewarded by Wall Street by a surge in the stock prices of the companies making those layoffs.

In the old days, more businesses in America were family-owned, and employees were often regarded as almost “part of the family”.  Unfortunately, those days have disappeared forever.

Now, employees are treated like scum by many big companies, and if they don’t like how they are being treated they are told that they can leave.  For example, just consider what was going on at a security company down in Florida…

Jose Molero worked as a site inspector for the company, which provides security for neighborhoods and companies across the country, for more than a year.

Molero says when he went to the Kensington Golf and Country Club guardhouse, he found wooden paddles on a desk, some with staff names on them and one reading “for staff discipline.”

He says there was also what is called a “Wall of Shame,” where the supervisor points out and posts reports that contain grammatical errors.

When Molero complained about these things to his district manager, he was told that if anyone was offended “maybe they shouldn’t work here”…

Do you have a similar horror story to share?

Most of us do.

The U.S. economy is absolutely dominated by cold, heartless corporations that have no interest in listening to the little guy.  If they could find a way to do it, many of them would operate with no low-level employees at all.  And as technology continues to advance, they will replace as many of us as they can with robots, drones, machines and computers.

I’ll be honest with you – the future for workers in America looks really bleak.  The competition for any jobs that can’t be shipped overseas or replaced by technology is going to become even more heated.  This means that the middle class is going to get even smaller, the number of Americans dependent on the government is going to continue to explode, and the disparity between the wealthy and the poor is going to become even greater.

So what is the solution to this giant mess?  Please feel free to tell us what you think by posting a comment below…