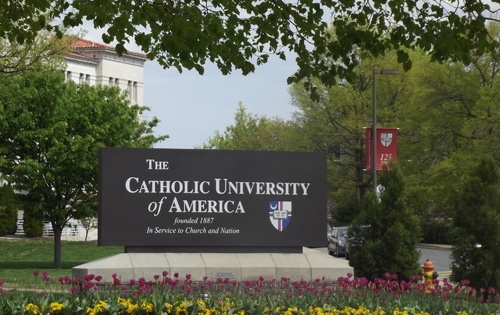 These demands for special accommodation are everywhere. Hertz, Heinz, Costco, IKEA, Target, Wal-mart, Disneyland,  McDonalds and hundreds of others have all been in the cross-hairs. Islamic demands and the ensuing lawsuits in order to impose sharia (Islamic law).

This is exactly the pattern that I meticulously document in my must-read primer, Stop the Islamization of America.

If you don’t agree that there “are too many crosses on Catholic campus,” then you are a “hater,” an “inciter,” an “islamophobe,” a “provocateur.”

“DC Area Professor To Catholic University: Too Many Crosses On Campus For Muslim Students To Pray,” DC Gazete

It just got surreal.  George Washington University Law School Professor John Banzhaf filed a human rights complaint to the D.C. Office of Human Rights against Catholic University for hindering Muslim students’ free exercise of their faith due to the “excessive” amount of “Catholic imagery” on the campus.  It seems that this man – who teaches at a different school across town – thinks that Catholic University’s adherence to the cultural aspects of Catholicism (we have a lot of artwork, Crucifixes, and statues in every nook and crany) keeps muslim students from praying the required five times a day.

Banzhaf, who already has a pending lawsuit against the university over ending its policy of allowing mixed-gender dormitories and has a history of filing civil rights suits on such topics as childhood obesity and smoking, filed the complaint alleging that Muslim students are not given their own prayer rooms.

He alleges that the university, “does not provide space – as other universities do – for the many daily prayers Muslim students must make, forcing them instead to find temporarily empty classrooms where they are often surrounded by Catholic symbols which are incongruous to their religion,” according to the Tower, Catholic University’s student newspaper.

Just as an aside from a graduate of Catholic high school, at least, did Prof. Banzhaf not see the title of the university?  Did he not see the GIGANTIC church on the university property we know as the National Basilica of the Shrine of the Immaculate Conception????  Oh, that’s right, it’s named in the complaint as a place muslims are “forced” to pray.  (We don’t do that in Catholicism.)  That basilica is, like, the flagship American Catholic church since it’s named for our national feast day even if it is NOT a cathedral, contrary to the complaint filed.  (No cathedra or bishop’s chair is in the building.  In Washington, that is in St. Matthew’s.)   What part of “Catholic” isn’t sinking in?  We’re into high art, Jesus hanging on the Cross, defending the separation of the sexes in dorms, etc.  It’s part and parcel of the deal when you attend Catholic school.

Across the board, the 60-page complaint filed by Banzhaf has officials at Catholic University and just about every other corner scratching heads.  First off, no muslim students have voiced concern for the issues of which Banzhaf writes.  Second, when members of other faiths are accepted at Catholic schools, their beliefs are not scorned or maligned in any way.  That violates Catholic norms of hospitality.  No one is required to pray with us.  That’s a private act, anyway, that Catholics are really supposed to do it more than five times a day.  Non-Catholics may not be specifically accommodated at our schools, but we Catholics would not request special treatment from schools of other faiths.  More or less, in this situation we are all guests in someone else’s house, and manners prevail.  Usually.  Anyone who has a problem with pictures of popes hanging on the wall, Crucifixes, statues of Our Lady of Grace, etc., can just go find somewhere else to go to school.

That the D.C. Office of Human Rights is even entertaining the complaint is cause for the big worry.

The complaint is absurd, writes Thomas Peters on the website CatholicVote.

“Can you imagine a law professor helping Catholic students to sue a Jewish or Muslim school to demand that the schools install crosses, remove their religious symbols, and allow the Catholics to construct a chapel on their property?” wrote Peters. “Can you imagine the argument being that Jewish and Muslims schools using their religious symbols and following their faith traditions would be described in the legal brief as “offensive”?!

“Normally I would have confidence that this lawsuit will be deemed without merit, but the way things are going these days, I just can’t be sure anymore. Simply incredible.”

At Breitbart, John Hayward warns that if Catholic University caves and creates space for muslims to pray their required five times a day, this will not be the only concession on the horizon.  He is correct in that even as the assault on religion continues, in order to maintain the true identity of faith – any faith – institutions of higher learning and the Church Herself will need to forgo tax exempt status.  It is the only way since the Church cannot and will not change.

At the same time, given that this is nowhere near the first time there have been complaints about Catholic art and culture being offensive, there may be another explanation.

“This attorney is really turning civil rights on its head,” [Patrick Reilly of the Cardinal Newman Society told Fox News]. “He’s using the law for his own discrimination against the Catholic institution and essentially saying Catholic University cannot operate according to Catholic principles.”

A notion that has been put in practice in many walks of life.  Stay tuned.  Catholic sentiment is leaning more orthodox these days.  Abandoning the identity is not likely to happen without a big fight.