More domestic disorder coming in the aftermath of Ferguson & Baltimore

Urban unrest expert Dr. Max Herman says that the United States is on the “cusp” of a wave of domestic disorder and that the country will see more race riots.

He sees the re-emergence of a 60’s-style “protest ideology” amongst black communities which will lead to more disorder.

“It’s very clear from studying history that these things tend to run in cycles,” said Herman, adding, “I think we are at the cusp of another cycle.”

Herman’s verdict correlates with a NBC News/Wall Street Journal poll released earlier this month which found that a whopping 96 percent of Americans said they expected to see more racially-driven unrest this summer.

Dan Braha, a professor at the University of Massachusetts, also said that such riots are foreseeable based on social media trends, arguing that a “prediction regarding ‘when’ and ‘where’ becomes more precise on short time scales.”

The article points to numerous different studies which suggest that the numerical size of an area’s black population is a key determining factor as to where riots will take place, taking precedence over other factors such as income differences, the unemployment of blacks compared to whites, and the responsiveness of the political system towards blacks.

As we have previously highlighted, the wealthy are certainly of the opinion that more civil unrest is on the way and have made preparations to steer well clear of any trouble.

During the Davos Economic Forum in January, economist Robert Johnson made headlines when he revealed that “hedge fund managers all over the world….are buying airstrips and farms in places like New Zealand because they think they need a getaway.”

In a follow up interview, Johnson cited the riots in Ferguson, Missouri as the reason why, “A lot of wealthy and powerful people are quite afraid right now – they see us on an unstable trajectory.”

Last month, Baltimore was hit by several days of rioting and looting in response to the death of Freddie Gray, a drug dealer who died as a result of injuries allegedly sustained during him being transported in a police van. 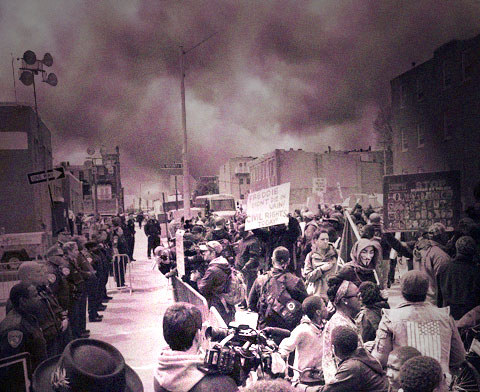