In recent weeks we’ve seen numerous reports of how banks are actively working with governments to restrict cash usage. JP Morgan Chase, one of the world’s largest banks, has advised their customers that storing cash in their safe deposit boxes is no longer allowed – for your safety, of course. The new policy sounds ridiculous but makes complete sense when you consider that you would then be left with no other choice than to hold your money exclusively in your bank account, where the bank will simply charge you for the privilege of depositing your funds in their fine financial institution.

Any normal working class individual would have the same reaction you’re problem having right now to this news: take your cash out of the bank. While that may sound like a great plan, it turns out that bank employees have been told by the government that they should be reporting to law enforcement officials any suspicious looking cash transactions, especially withdrawals, even if they are for just a couple of thousand dollars so that enforcement agents can then seize those funds.

They want to ensure total control and by controlling your cash flow, they control you. It’s as simple as that. As noted below, the ideal situation for the world’s central bankers and governments is a total ban on cash transactions. It is, after all, the 21st century. Who needs cash when you have a debit card or phone payment systems?

Plus, there’s terrorism to contend with and we all know that only terrorists, criminals and shady underworld types use cash.

Moreover, in the event the President or other bureaucrat declares a financial crisis, the government can move with unprecedented speed to stabilize the system by simply compelling you to spend money to boost economic activity. And by “compelling” we mean forcing you through direct taxation and withdrawal of your funds.

If their intentions are not yet obvious, then the following report from Zero Hedge should make it perfectly clear.

At this stage, a sane person might be tempted to call it a day on the monetary experiments, especially considering that at this point, the limits have been reached. That is, there are literally no more assets to buy and rates have hit the effective lower bound where rational actors will eschew bank deposits in favor of the mattress. But not so fast, say folks like Citi’s Willem Buiter and economist Ken Rogoff: the world could always ban cash because if you eliminate physical currency and force people to use a debit card linked to a government controlled bank account for all transactions, you can effectively centrally plan everything. Consumers not spending? No problem. Just tax their excess account balance.Economy overheating? Again, no problem. Raise the interest paid on account holdings to encourage people to stop spending. So with Citi, Harvard, and Denmark all onboard, we bring you the latest call for a cashless society, this time from German economist and member of the German Council Of Economic Experts Peter Bofinger.

Coins and bills are obsolete and only reduce the influence of central banks. This position represents the economy Peter Bofinger. The federal government should stand up for the abolition of cash, he calls in the mirror…

The economy Peter Bofinger campaigns for the abolition of cash. “With today’s technical possibilities coins and notes are in fact an anachronism,” Bofinger told SPIEGEL.

If these away, the markets for undeclared work and drugs could be dried out. In addition, it would have the central banks easier to enforce its monetary policy.The teaching in Würzburg economics professor called on the federal government to promote at the international level for the abolition of cash. “That would certainly be a good topic for the agenda of the G-7 summit in Elmau,” he said. (Click here to read the full interview in the new mirror .)

Even the former US Treasury Secretary Larry Summers and economist pleaded for an end to the already cash . Likewise, the US economist Kenneth Rogoff . He also argued that the interest rates of central banks have less clout when banks or consumer credit rather than hoard cash.

Critics warn, however , such debates would only distract from the real problems of the current monetary policy.

The idea is that either you start spending your money like a good Patriotic American according to the rules and regulations, or the government would just take it from you and reappropriate it as they see fit.

But such a thing could never happen in America – that the government could force a private citizen to purchase a product or service, or face financial penalties and even jail time – right?

To answer this question we direct you to the Patient Affordable Care Act, also known as Obamacare.

Besides, you don’t own that money you’re depositing at the bank anyway, because once you deposit those funds, according to new banking rules, you become a creditor to your financial institution and they can pretty much do whatever they want with what was formerly your money.

We can see that governments around the world are feverishly working to marginalize cash and criminalize those who use it.

Naturally, that will force those who prefer to keep their spending habits outside of the purview of prying government eyes to go underground. Currency mechanisms like gold, silver, food, medicine, Bitcoin blockchains and other bartererable trade goodsmay become the cash du jour should the trend continue. 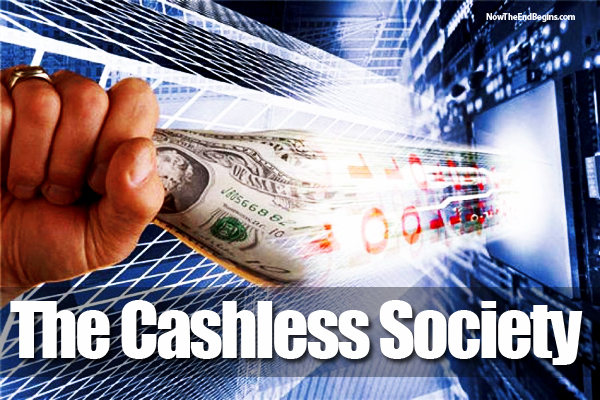