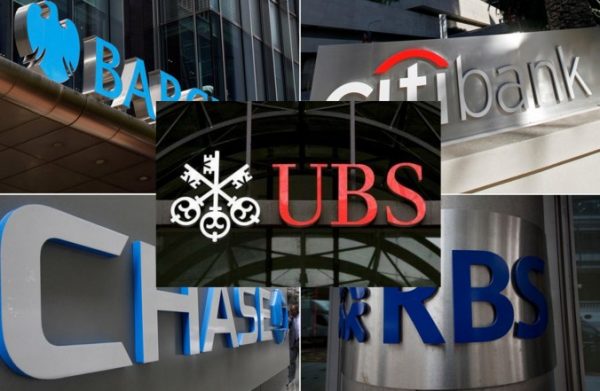 The Obama Department of Justice announced Wednesday that Barclays, Royal Bank of Scotland, JPMorgan Chase, UBS and Citigroup all pled guilty to manipulating global currencies and interest rates. No one actually had justice brought on them though. Instead, the banks were fined a whopping $5.7 billion!

US banks JPMorgan and Citigroup and Britain’s Barclays and Royal Bank of Scotland are expected to plead guilty to criminal charges with the US Department of Justice related to forex manipulation, people familiar with the matter said.

Swiss bank UBS is expected to avoid a criminal charge after getting immunity for alerting authorities to a possible problem. But it faces a criminal charge over the rigging of benchmark (Libor) interest rates, two people familiar with the matter said.

That stems from an agreement with the Justice Department in its December 2012 Libor settlement not to commit more offences. It will also pay a $200 million fine, the two sources said.

Barclays is also expected to reach settlements with other British and US regulators, which means its penalties could be significantly higher than the other banks and top $2 billion.

Barclays has set aside $3.2 billion to cover any forex fines, and other banks also have provisions for settlements.

The obvious question that should be upon Americans’ minds is, where will this $5.7 billion go?

In addition to the criminal cases with the Justice Department, the banks each struck settlements with Mr. Lawsky as well as federal regulators. Barclays settled with the Commodity Futures Trading Commission, the Federal Reserve, the Financial Conduct Authority of London and Mr. Lawsky, paying a total sum of $2.4 billion.

Citigroup paid the second-highest penalty, roughly $1.2 billion, including a $925 million antitrust penalty, the largest single fine ever imposed for a violation of the Sherman Act. JPMorgan paid roughly $900 million, and R.B.S. paid about $660 million.

UBS agreed to pay more than $500 million, some of which was earmarked for the Libor crimes and the rest for currency manipulation. The bank, which was the first to cooperate in the currency case, was not criminally charged in that matter.

Remember who is in charge of the Justice Department, none other than asset forfeiture thief Loretta Lynch. We have several elected servants to thank for that.

“Today’s historic resolutions are the latest in our ongoing efforts to investigate and prosecute financial crimes, and they serve as a stark reminder that this Department of Justice intends to vigorously prosecute all those who tilt the economic system in their favor; who subvert our marketplaces; and who enrich themselves at the expense of American consumers,” said Attorney General Lynch. “The penalty these banks will now pay is fitting considering the long-running and egregious nature of their anticompetitive conduct. It is commensurate with the pervasive harm done. And it should deter competitors in the future from chasing profits without regard to fairness, to the law, or to the public welfare.”

“They acted as partners, rather than competitors, in an effort to push the exchange rate in directions favorable to their banks, but detrimental to many others,” Lynch said. “The prices the market sets for those currencies influence virtually every sector of every economy in the world. Their actions inflated the bank’s profits, while harming countless consumers, investors and institutions around the globe.”

“The charged conspiracy fixed the U.S. dollar – euro exchange rate, affecting currencies that are at the heart of international commerce and undermining the integrity and the competitiveness of foreign currency exchange markets which account for hundreds of billions of dollars’ worth of transactions every day,” said Assistant Attorney General Baer. “The seriousness of the crime warrants the parent-level guilty pleas by Citicorp, Barclays, JPMorgan and RBS.”

“The five parent-level guilty pleas that the department is announcing today communicate loud and clear that we will hold financial institutions accountable for criminal misconduct,” said Assistant Attorney General Caldwell. “And we will enforce the agreements that we enter into with corporations. If appropriate and proportional to the misconduct and the company’s track record, we will tear up an NPA or a DPA and prosecute the offending company.”

“These resolutions make clear that the U.S. Government will not tolerate criminal behavior in any sector of the financial markets,” said Assistant Director in Charge McCabe. “This investigation represents another step in the FBI’s ongoing efforts to find and stop those responsible for complex financial schemes for their own personal benefit. I commend the special agents, forensic accountants, and analysts, as well as the prosecutors for the significant time and resources they committed to investigating this case.”

I am glad to see that banks are at least pleading guilty to their corruption. What bothers me is that no actual justice is taking place. There is no restitution to the millions of people that have been taken for a ride by these banking cartels. They just continue on, have and will likely receive more bailouts from the public at the hands of America’s elected “servants” and will increase fees, as well as nickel and dime their customers for the almighty dollar.

When are the American people going to have enough of corrupt banksters, corrupt politicians and a corrupt federal government? Perhaps, it will be when we stop being corrupt ourselves.