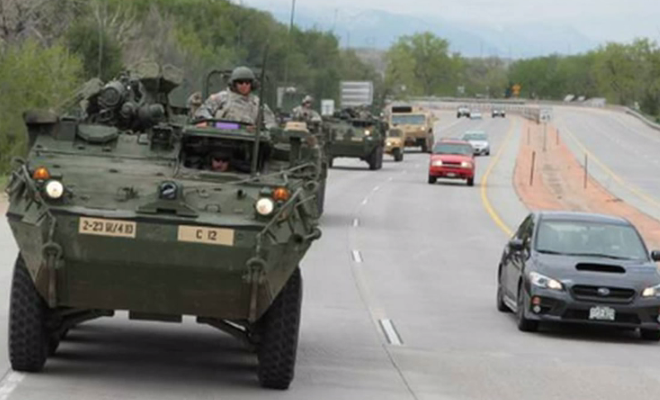 “SOMETHING VERY UNUSUAL IS ABOUT TO HAPPEN”

(INTELLIHUB) — In what is being described as the largest military road convoy in Colorado since World War II, hundreds of Stryker armored vehicles and other military rigs will travel from Fort Carson to Piñon Canyon Maneuver Site for “combat training.”

The simulated war game known as Raider Focus will pack Colorado highways with military vehicles set to take off every half hour in 15 to 30 vehicle convoys for the up to four-hour trip.

“This is a big sign that something huge is going down, it’s just one thing after another, continuing to see all these military movements and activity….. tanks, equipment on train tracks, helicopters over residential neighbors, and now we have this in Colorado,” reported DAHBOO777 in the above video report.

Although the convoy is apparently only the first part of the war game, the driving on American highways is actually part of the training itself. “The move to Piñon Canyon is itself a training event,” Col. David Hodne told the Colorado Gazette.

The Gazette also reported that on arrival the 4,000 troops will fight a simulated war which is a “graduation exercise of sorts for the unit.”

For those hoping to document the convoy, the war game is planned for May 26th through the 30th and, although the exact route has not been released, local media has listed areas most likely to be impacted.

While this war games drill will surely be labeled normal by the establishment and their supporters, the fact that it is set to be the largest convoy seen in Colorado since World War II clearly shows that this is anything but normal. With Jade Helm 2015 on the horizon Raider Focus becomes even more suspicious.

From literally dozens of videos taken in the last 2 months showing a massive increase in military movements throughout the country to multiple realistic training exercises that have practiced for the internment of American citizens, something sinister may be on the horizon.

In fact, detailed research into possible internment camps within the United States shows conclusively that they are a very real possibility.

As detailed in an extremely powerful article on the blog America the Battlefield, the powers that be have erected an extensive framework and infrastructure for internment camps in America.

Here is the official U.S. federal government and military documentation confirming that they are erecting an extensive framework and infrastructure of internment camps in the United States, in preparation for economic collapse and mass civil unrest:

In 2009 the National Emergency Centers Act (H.R. 645), was introduced in Congress, mandating the establishment of “national emergency centers” to be located on military installations for the purpose of providing “temporary housing, medical, and humanitarian assistance to individuals and families dislocated due to an emergency or major disaster,” according to the bill. In addition to emergencies, this legislation is designed to “meet other appropriate needs, as determined by the Secretary of Homeland Security,” an open-ended mandate which could mean just about anything they want it to mean, including the forced detention of American citizens in the event of widespread rioting after a national emergency or total economic collapse.

In February of 2010 the Internment and Resettlement Operations (FM 3-39.40) was leaked, a U.S. Army manual outlining policies for processing detainees into internment camps both globally and inside the United States. That is against the Law of Nations.

In 2009 the National Guard posted a number of job opportunities looking forInternment and Resettlement Specialists (31-E) to work in “civilian internee camps” within the United States, with the job description: “Internment/resettlement specialists are primarily responsible for day-to-day operations in a military confinement/correctional facility or detention/internment facility.”

In 2006, KBR was contracted by Homeland Security for $385 million to build detention centers designed to deal with “an emergency influx of immigrants into the U.S.,” or the rapid development of unspecified “new programs” that would require large numbers of people to be interned. Does that ring a bell? It should. It’s called “Immigration Reform,” and they have been planning this for a very long time.

Soon after KBR’s announcement, a little-known Army document surfaced, entitled Civilian Inmate Labor Program. The unclassified document describes in detail Army Regulation 210-35, first drafted in 1997, which underwent a “rapid act revision” in January of 2005 and now provides a policy for the creation of labor programs and prison camps aboard Army installations and other U.S. military bases.

Congressman W.G. “Bill” Hefner (D-NC) wrote a now infamous letter to Zell Setzer of Setzer Insurance and Associates, Salisbury, NC, on March 24, 1997, regarding information “pertaining to the Army’s policy and guidance for establishing civilian inmate labor program and civilian prison camps on Army installations.” Congressman Hefner confirmed to Mr. Setzer that “the program has been funded, staffed, and does not reflect current Army policy,” denoting a preconceived future agenda. That is the very definition of a conspiracy between two or more people.

Under the indefinite detention provision of the National Defense Authorization Act For Fiscal Year 2011, which was signed by Barack Hussein Obama on New Year’s Eve of 2011—when most of the Congress was home on Christmas vacation—American citizens can be legally (not lawfully) kidnapped and detained indefinitely without charge or trial, and subjected to extreme rendition with no due process of law.

The Guardian, a London paper, called the NDAA an “historic assault on American liberty.” Forbes called it the “greatest threat to civil liberties Americans face.”

The U.S. Supreme Court has upheld the indefinite detention provision of the NDAA ever since, refusing to follow the Supreme Law of the Land, which is the Constitution for United States of America, compelling Tangerine Bolen to write concerning Pulitzer prize-winning reporter Chris Hedges’ and other prominent journalists’ lawsuit against the federal government, “We are no longer a nation ruled by laws.”

The U.S. Army Military Police training manual for Civil Disturbance Operations(FM 3-19.15), describes the “operational threats of the civil disturbance environment,” the “general causes for civil unrest,” weapons deployment, the legal considerations of “control force operations,” the legal considerations of “apprehension, search, and detention,” and recording the “number of cadre and inmates injured or killed.” This 115-page manual represented at the time of its publishing a shocking new insight into how the U.S. military plans to violently quell unrest in the aftermath of a total economic collapse or other national emergency, with rules of engagement regarding the use of “deadly force” in confronting “dissidents,” which were made disturbingly clear with the directive that a “warning shot will not be fired.”

The above list is by no means the only evidence but should be conclusive enough to convince the most skeptical reader. Taking into account the above facts when trying to understand massive war game simulations such as Raider Focus provides a much clearer picture.

At this point there is absolutely no denying that certain portions of the military are, at the very least, preparing for massive civil unrest in the country and while Raider Focus could very well be what military brass claims, it is highly suspicious under the current circumstances.