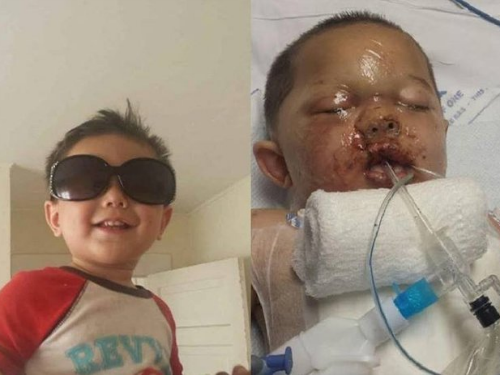 Nearly a year has passed since a Habersham County SWAT team stormed into the Phonesavanh residence, and very nearly killed their 19 month old child. The no-knock raid was prompted by an anonymous tip which suggested there were drugs in the house. As the officers forced their way into the home, they lobbed a flash grenade which wound up landing in the crib where baby “bou-bou” was sleeping. As it erupted, the infant suffered severe burns and had to be taken to the hospital, and placed in a medically induced coma.

To any sane person, the sheriff’s department would be responsible for the damage inflicted on this child. Not only were there no drugs in the house, but the suspect they were looking for was found elsewhere. And despite their claims that they had the house under surveillance for two days prior to the raid, somehow they had no idea that there were children who lived there.

Still, the family had to fight the county tooth and nail to have their $1 million in medical bills reimbursed. Last month they settled with the county, and received $964,000, half of which will be given to them now, and the rest will be given to baby after he turns 18. While it’s great to hear that the family is getting something out of this, it’s shocking to see how defiant the sheriff’s department was, right to the very end. They never once admitted culpability for their gross negligence, and in a bizarre twist, their defense statement in court basically blamed the infant for his own injuries.

William Norman Grigg from the Pro Libertate blog read through the lengthy document, and sifted through the legalese for our benefit. It’s almost unbelievable how far the sheriff’s department was willing to go to avoid paying the family whose child they burned alive.

The act of sleeping in a room about to be breached by a SWAT team constituted “criminal” conduct on the part of the infant. At the very least, the infant was fully liable for the nearly fatal injuries inflicted on him when Habersham County Sheriff’s Deputy Charles Long blindly heaved a flash-bang grenade – a “destructive device,” as described by the ATF, that when detonated burns at 2,000-3,500 degrees Fahrenheit – into the crib.

Merely by being in that room, Bou-Bou had assumed the risk of coming under attack by a SWAT team. By impeding the trajectory of that grenade, rather than fleeing from his crib, Bou-Bou failed to “avoid the consequences” of that attack.

In any case, Bou-Bou, along with his parents and his siblings, are fully and exclusively to blame for the injuries that nearly killed the child and left the family with more than one million dollars in medical bills. The SWAT team that invaded the home in Cornelia, Georgia on the basis of a bogus anonymous tip that a $50 drug transaction had occurred there is legally blameless.

This is the defense presented by Haberham County Sheriff Joey Terrell and his comrades in their reply to a federal lawsuit filed last February on behalf of Bou-Bou Phonesavanh and his family.

Can you believe that? It gets much worse from here. When photographic evidence of the baby’s horrific injuries were shown in court, the defendants denied that the photograph “accurately depicts the injuries allegedly sustained.” The statement goes on to the blame the parents and the baby because the damages caused to the child were “directly and proximately caused by the contributory and comparative negligence of the plaintiffs and their failure to exercise ordinary care.”

And as a last-ditch effort to avoid paying the bill, the sheriff’s department invoked the principle of “laches,” which in the legal world, is a kind of use it or lose it statement. It basically means that you don’t have the right to sue, if you waited a long period of time in the hopes that future circumstances would favor your case. It doesn’t apply in this case at all because the family almost immediately filed a notice with the court after the incident.

The origins and usage of that obscure and archaic legal term do offer some insight about the way Bou-Bou’s would-be murderers see themselves, and their victim.

“Laches” is a term embodying the ancient legal maxim that “Equity favors the vigilant, and not those who have slumbered on their rights.” Defendants who appeal to this oft-cited and little-applied concept are accusing plaintiffs of subjecting them to a form of “legal ambush.”

What Sheriff Joey and his cornpone chekists are claiming, in effect, is that while he was sleeping, Baby Bou-Bou ambushed them.

How low can one police department go?