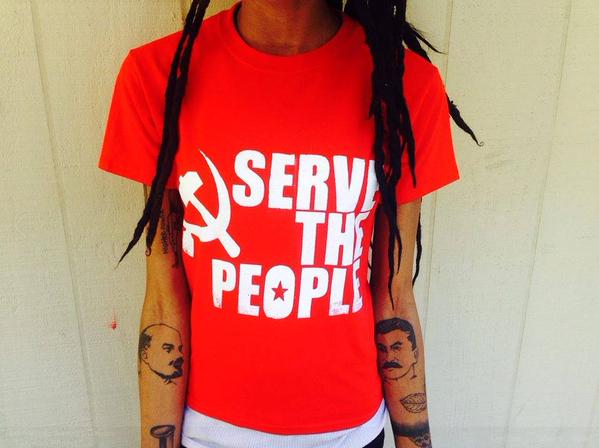 The protest took place outside a Planned Parenthood facility to draw attention to the fact that on average a black baby is aborted every minute in the United States and that black women are twice as likely to have abortions in comparison to whites.

This issue has been completely overlooked by the #BlackLivesMatter movement, which apparently thinks little of the hundreds of thousands of black babies every year that never even get a chance at life, including in major cities like New York where more black babies are aborted than ones actually born.

Soon after the protest began, Communist activists from a group called Red Guards Austin (who laughably deny advocating Communism despite praising Mao, Stalin and marching under a hammer and sickle), arrived to aggressively try and shut down the demonstration.

This is how leftists think they’re gonna endear #BlackLivesMatter to the nation. Marching under the hammer & sickle. pic.twitter.com/RKE2L1unit

They initially tried to censor the free speech of pro-lifers by blocking their signs with pieces of cardboard and black tarps. In the world of “tolerant” liberals, the First Amendment rights of their fellow citizens will not be tolerated. Photos on the group’s Facebook page also show them burning literature with which they disagree – another hallmark of historical dictatorships

“Tolerant” liberals who cannot tolerate anyone else expressing an opinion that differs to theirs. pic.twitter.com/gtS4hbnPHe — Paul Joseph Watson (@PrisonPlanet) May 21, 2015

Some of the agitators then became violent, screaming at and shoving Alex Jones before one physically snapped a microphone wire and ran off, another aggressive attempt to censor free speech. In another revealing exchange, a Red Guards agitator sardonically tells David Knight’s wife Karen she is a “white savior” for adopting two children. “I’m not white,” responds Karen. Asked how many children she adopted, the Red Guards activist responds, “How many did I adopt? I kill my kids.” The same woman is pictured on the group’s Facebook page marching under a hammer and sickle. She also has lovingly tattooed her arms with the faces of Lenin and Stalin.

Communists who attacked pro-life protest said they do not associate with Stalin. What do you think? pic.twitter.com/Fm75RbCDQU — Paul Joseph Watson (@PrisonPlanet) May 22, 2015

Another Red Guard militant – who resembled a cross between a rat and a shrimp – said he would “pay to kill babies,” while admitting that he was “going to hell.”

After the rally, Red Guards posted a message to its Facebook page libeling Alex Jones by claiming he “seeks to make pro-choice activists home addresses public for his wingnut fascist supporters to access,” and “encourages violence against women activists.” Both of these claims are total fabrications backed up by zero evidence.

The group also disgracefully calls for other agitators to visit the homes of people who disagree with them and says it will publish their private addresses online, a form of harassment known as doxxing.

“We know as much about their circles as they could ever hope to know about ours. We will be posting updates of photos, names, addresses and license plates of known racists who associate with infowars and the conspiracy theorist crowd in general,” states the post. The message quotes Mao Tse-tung, the Communist dictator whose regime was responsible for the deaths of 60-80 million people. This incident serves as yet another reminder that leftists are some of the most crazed, aggressive, violent, and intolerant people on the planet who will go to any lengths to censor and intimidate anyone who dares disagree with them. We invite our readers to express their First Amendment rights by visiting the Red Guard’s Facebook page and letting them know what they think of the group’s behavior.

This is how leftists think they’re gonna endear #BlackLivesMatter to the nation. Burning the American flag. pic.twitter.com/5qk5g0B87z