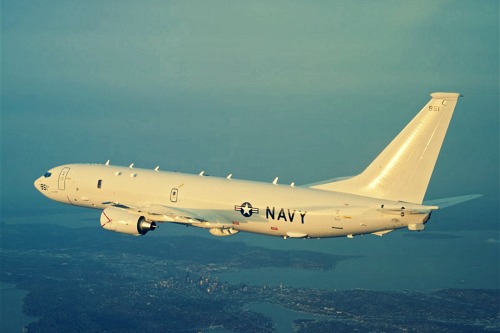 The Chinese navy issued eight warnings to a U.S. surveillance plane that was flying over artificial islands Beijing is building in the South China Sea on Wednesday.

A CNN team was given exclusive access to join in the surveillance flights over the contested waters, which the Pentagon allowed for the first time in order to raise awareness about the challenge posed by the islands and the growing U.S. response.

CNN was aboard the P8-A Poseidon, America’s most advanced surveillance and submarine-hunting aircraft, and quickly learned that the Chinese are themselves displeased by the U.S. pushback.

China believes it has jurisdiction over the South China Sea, but other countries – including the Philippines, Vietnam, Malaysia, Brunei, and Taiwan – don’t agree. They have been involved in territorial claims over the ownership of reefs, but that isn’t stopping the Chinese from rapidly developing islands there.

China has been building small islands from existing reefs with the purpose of placing military bases — including airfields — on them.

These new islands will give China additional military presence in the region, and reinforce Beijing’s claims on a region rich in fisheries and potentially wealthy in natural gas. The islands are in effect permanent aircraft carriers — on station 24 hours a day, 365 days a year.

In military terminology, China’s island outposts are part of a “kill chain,” the web of sensors on manned and unmanned aircraft, spy satellites, surface ships, and submarines stretching all the way back to Beijing.

In the event of a war, China’s kill chain could locate, identify, and track enemy ships — especially big ones like aircraft carriers — and proceed to sink them.

China’s most advanced military construction is taking place on Fiery Cross Reef (known as Yongshu Reef in China). That’s the reef the P8-A Poseidon was hovering over when the Chinese navy issued their warnings to the plane.

Some believe that China is “flexing its muscles” and that the country’s creation of new territory is part of a broader military push designed to challenge U.S. dominance in the region. CNN notes that in addition to building the islands, Beijing is sailing its first aircraft carrier, equipping its nuclear missiles with multiple warheads, and developing missiles to destroy warships.

Former CIA Deputy Director Michael Morell told CNN that the confrontation indicates there is “absolutely” a risk of the U.S. and China going to war sometime in the future:

He warned on CNN that “there’s a real risk, when you have this kind of confrontation, for something bad happening.”

“China is a rising power. We’re a status quo power. We’re the big dog on the block … They want more influence,” he said. “Are we going to move a little bit? Are they going to push? How is that dance going to work out? This is a significant issue for the next President of the United States.”

War is “not in their interests, (and) it’s not in our interests,” Morell acknowledged.

It is worth mentioning that Morell is the author of a book titled The Great War of Our Time: The CIA’s Fight Against Terrorism–From al Qa’ida to ISIS. The book, which was released less than two weeks ago, is about CIA counter-terrorism activities and discusses “new, growing threats from terrorist groups that, if unaddressed, could leave the country vulnerable to attacks that would dwarf 9/11 in magnitude.”

The P8-A Poseidon flew at 15,000 feet in the air at its lowest point, but the U.S. is considering flying such surveillance missions even closer over the islands, as well as sailing U.S. warships within miles of them.