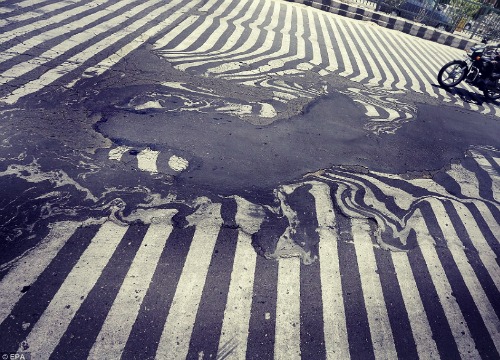 The picture above is not Photoshopped. This is what is happening to roads in India under the killer heatwave now passing through the country.

The heat is so blistering hot in India in recent weeks, that over 1,100 people have died in it and the roads in some places are literally melting in the sun. Temps have topped out at nearly 118 degrees.

People are being warned not to go outside as a record-setting almost 900 people have passed away just in the state of Andhra Pradesh in the last ten days alone.

Road surfaces in New Delhi have started melting as temperatures hit a blistering 45 degrees Celsius (113 degrees Fahrenheit) – and forecasters have warned it will get even hotter.

Southern India has been hit hardest by the sweltering weather and many of the victims are construction workers, elderly or homeless people unable to heed official advice to stay indoors.

Searing temperatures of up to 45 degrees Celcius have seen road surfaces start to melt in New Delhi, distorting the road markings.

Interesting considering this is one of the areas specifically pointed out in a study that geoengineering would royally screw up.