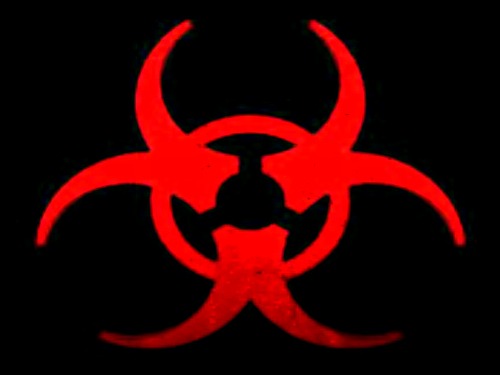 Today in “I can’t believe this is happening again” news, the Pentagon has admitted that – oops – the U.S. military accidentally shipped samples of live anthrax to private research labs in nine states.

“The Department of Defense is collaborating with the Centers for Disease Control and Prevention in their investigation of the inadvertent transfer of samples containing live Bacillus anthracis, also known as anthrax, from a DoD lab in Dugway Utah, to labs in nine states,” said Col. Steve Warren, a Pentagon spokesman.

It’s gonna be fine, though, they said:

“There is no known risk to the general public, and there are no suspected or confirmed cases of anthrax infection in potentially exposed lab workers,” he added. “The DoD lab was working as part of a DoD effort to develop a field-based test to identify biological threats in the environment. Out of an abundance of caution, DoD has stopped the shipment of this material from its labs pending completion of the investigation.”

“Out of an abundance of caution”…where have we heard that before?

The samples were shipped to labs in California, Texas, Wisconsin, Tennessee, Maryland, Virginia, Delaware, New Jersey, and New York last week. An official said that a laboratory in Maryland detected that their shipment contained live samples and contacted the CDC.

The official said it is believed that all of the shipments have been secured.

The samples all came from a batch of anthrax listed as AG-1. The Pentagon has confirmed that one of the shipments contained live samples of AG-1 and suspects that the others do as well.

The CDC said the anthrax was being used to develop a test in case someone used the bacteria as part of a bioterror attack:

“The lab was working as part of a DOD effort to develop a new diagnostic test to identify biological threats. Although an inactivated agent was expected, the lab reported they were able to grow live Bacillus anthracis,” CDC said.

Live anthrax is supposed to be handled in a biosafety level 3 (BSL-3) lab – one that is equipped to protect people from the bacteria and from the spores it produces.

“CDC is working in conjunction with state and federal partners to conduct an investigation with all the labs that received samples from the DOD. The ongoing investigation includes determining if the labs also received other live samples, epidemiologic consultation, worker safety review, laboratory analysis, and handling of laboratory waste. “

Right. Because remember an incident like this happened LAST YEAR too?

Sometime between June 6 – 13, more than 80 scientists from the CDC may have been exposed to live anthrax bacteria after potentially infectious samples were sent to laboratories unequipped to handle dangerous pathogens.

The agency was testing a new way to kill anthrax, which it discovered did not work as well as expected.

Workers in three labs who were not wearing protective gear moved and experimented with samples of the highly infectious bacteria that were supposed to have been deactivated, the agency said.

It added in a statement that procedures used in two of those laboratories in Atlanta, where the C.D.C. is based, may have “aerosolized the spores,” essentially blowing the bacteria into the air. The exposure was discovered June 13, when the bacterial plates were collected for disposal and live B. anthracis colonies, or anthrax bacteria, were found.

This is, well, kind of a big deal, because anthrax can infect people in three ways – on the skin, in the digestive system, or in the lungs. All three types can be dangerous but inhaled anthrax is the most deadly because once it starts causing symptoms it is often too late for antibiotics to do any good. Inhaled spores can lurk in the lungs for months before they activate, so someone exposed to the spores may not know what their symptoms mean.

According to the CDC, anthrax is an ideal biological weapon:

Anthrax has been used as a weapon around the world for nearly a century. In 2001, powdered anthrax spores were deliberately put into letters that were mailed through the U.S. postal system. Twenty-two people, including 12 mail handlers, got anthrax, and five of these 22 people died.

About the 2001 anthrax attacks…the FBI closed their investigation in 2010. It remains unsolved, but the FBI declared Dr. Bruce Ivins, a scientist who worked at the government’s biodefense labs at Fort Detrick in Frederick, Maryland, the perpetrator, despite having no direct evidence of his involvement. In April of this year, Richard Lambert, the FBI head agent in charge of the anthrax investigation, filed a federal whistleblower lawsuit calling the entire FBI investigation a sham.

He was right about that: the government gives us more and more reasons to question it every day.