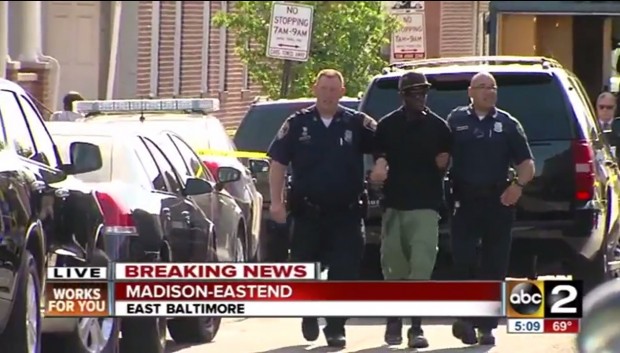 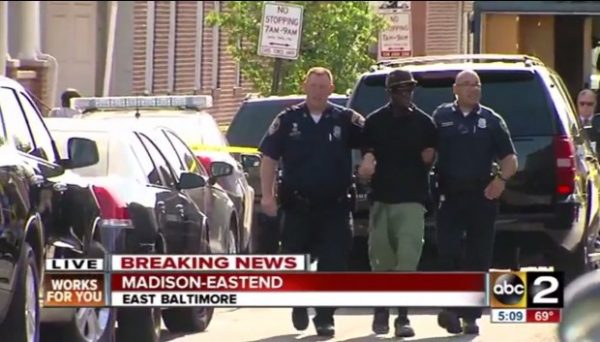 While the Baltimore police have had many accusations of corruption, and there are questions regarding the death of Freddie Gray, which will come out in court, one has to wonder why State’s Attorney Marilyn Mosby has not been as vocal against the rioters, looters, correction officers and her own mayor as she was about the six police officers that stand charged in the death of Gray. Well, here’s just one instance of a suspect who knows how to create drama for the police. The only downside for him was the news cameras caught his entire act on video.

Two people were arrested in connection with the non-fatal shootings of four people in East Baltimore Wednesday, while another person was fatally shot, Baltimore Police said.

ABC2 cameras captured images of a man being taken into custody. Skip to the 1:30 mark to see for yourself.

The suspect is clearly playing the victim as there was absolutely no reason for his behavior. Additionally, the police can clearly be seen not using any kind of excessive force. In fact, doesn’t appear they are using force at all as the man goes down all on his own.

The police seem as concerned as I was in watching it. Even viewers of the live feed began to question the suspects motives, claiming that he was faking a fall.

It didn’t keep him from being taken to jail though.

Looks like the guy who fell down in the live shot is heading to Central Booking pic.twitter.com/eDG13eKv5h

It has not been determined if the suspect in the video was the shooter. However, police did locate five victims of the shooting. There were four adult males and one 17-year-old male. They also believe two more suspects are still at large.

While the suspect’s antics are laughable, the murder of five people is not. Detectives are still investigating and asking for the public’s help. If anyone has any information on the shooting, you are asked to call 410-396-2100.