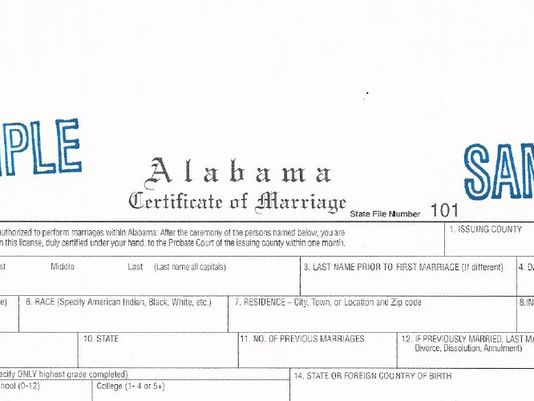 The battle has been raging over redefining marriage in Alabama, as the state’s constitution declares marriage to be between a man and a woman. However, federal courts are attempting to force the state to issue marriage licenses to those practicing sodomy. In an attempt to stop probate judges from issuing licenses arbitrarily, the Alabama Senate passes bill by a vote of 22-3 without having to obtain permission from a government official.

Senate Bill 377, a bill which would end marriage licensing and replace it with a contract process, was approved by the Alabama Senate on May 19.

According to the text of the bill, it would abolish the requirement to obtain a marriage license from the judge of probate.

This does not open up marriage for same-sex couples. According to the legislation:

Effective July 1, 2015, the only requirement to be married in this state shall be for parties 16 who are otherwise legally authorized to be married to enter into a contract of marriage as provided herein.

(b) A contract to be married shall contain the 19 following minimum information:

(2) A statement that the parties are legally authorized to be married.

(3) A statement that the parties voluntarily and 24 based on each parties’ own freewill enter into a marriage.

(4) The signatures of the parties.

Keep in mind that in the State of Alabama it is still illegal for those practicing sodomy to engage in marriage.

Senator Greg Albritton (R-Bay Minette), who introduced the bill said, “The purpose of Senate Bill 377 is to bring order out of chaos.”

“The sanctity of marriage cannot be sanctified by government of men,” Albritton said. “That is where we have gotten ourselves in trouble.”

“When you invite the state into those matters of personal or religious import, it creates difficulties,” he added. “Go back long, long ago in a galaxy far, far away. Early twentieth century, if you go back and look and try to find marriage licenses for your grandparents or great grandparents, you won’t find it. What you will find instead is where people have come in and recorded when a marriage has occurred.”

In other words, Albritton wants the issue of marriage back in the hands of the Church. While the contract portion would be recognized legally, the requirements for marriage to be handled lawfully under the umbrella of the Church would remain intact.

Though Albritton hinted at a possible illegal ruling by the Supreme Court as being valid and not affecting the legislation, the question that needs to come to the forefront in all of this is why the state is issuing marriage licenses in the first place. Do your homework and you’ll discover that a racial component is part of that history. The second question that should be raised is why any state would sit idly by and wait on the Supreme Court to rule on this issue. Governors with any understanding and backbone would currently be declaring that they have no constitutional authority to rule in the matter and should simply warn the judge’s that no matter what their decision was, it was not within the purview of their jurisdiction to rule on the measure. Finally, it should be asked why a fee continues to be associated, and not just associated, but increased. According to Albritton, it was “to raise support.”

Though the bill itself does not define marriage, the Alabama constitution does. Amendment 774, adopted to the constitution in 2006 reads:

(a) This amendment shall be known and may be cited as the Sanctity of Marriage Amendment.

(b) Marriage is inherently a unique relationship between a man and a woman. As a matter of public policy, this state has a special interest in encouraging, supporting, and protecting this unique relationship in order to promote, among other goals, the stability and welfare of society and its children. A marriage contracted between individuals of the same sex is invalid in this state.

(c) Marriage is a sacred covenant, solemnized between a man and a woman, which, when the legal capacity and consent of both parties is present, establishes their relationship as husband and wife, and which is recognized by the state as a civil contract.

(d) No marriage license shall be issued in the State of Alabama to parties of the same sex.

(e) The State of Alabama shall not recognize as valid any marriage of parties of the same sex that occurred or was alleged to have occurred as a result of the law of any jurisdiction regardless of whether a marriage license was issued.

(f) The State of Alabama shall not recognize as valid any common law marriage of parties of the same sex.

Chief Justice Roy Moore has told state judges not to disregard the ruling of a federal court on Alabama’s constitution and marriage. He has made the case for what marriage is and where the right to marriage comes from, God. Moore encouraged Governor Robert Bentley to resist federal tyranny in the matter, but Bentley seems to be more geared towards political correctness than he does the truth about rights, marriage and his duty to the people of Alabama.

Led by Justice Moore, the Alabama Supreme Court also put a halt to illegal same-sex “marriages” across the state back in March.