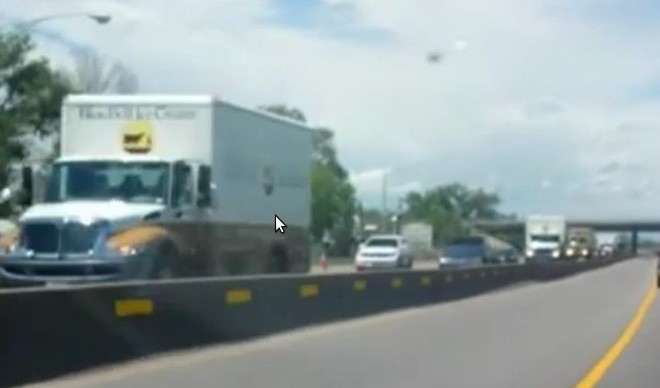 STATE DISASTER PLANS, UNCOVERED BY INTELLIHUB, CONFIRM “REFRIGERATED TRUCKS” TO BE USED AS BODY TRANSPORT VEHICLES DURING TIME OF CRISIS

(INTELLIHUB) — Page 18 of the Arizona State Pandemic Influenza and Mass fatality Response Plan details how bodies, human remains, should be disposed of in case a pandemic or major disaster were to take place; occur.

Shockingly the plan basically describes how authorities would commandeer “refrigerated trucks”, like the ones spotted in the midst of a recent military convoy, as “air conditioning” alone “will not suffice” when it comes to transporting bodies in the heat.

The State’s plan also details how all commercial “markings” on such vehicles should be “removed” to thwart the general public once the vehicles have been put to use.

Moreover the document describes how such refrigerated vehicles shall transport bodies “discreetly” in a time of crisis, even under the cover of “night”, proving that such plans are indeed in effect and have been since as early as 2007.

SO WHY IS ALL OF THIS IMPORTANT?

While the Pandemic Influenza and Mass Fatality Response Plan, mentioned above, may not seem ominous alone — when coupled with a recent discovery that was also caught on video, you may change your mind.

But remember, I myself am not saying that this is actually what’s going on, I am merely entertaining theories already put forth.

The discovery and video footage of at least 10 Blue Bell ice cream trucks traveling south in Colorado, along side a military convoy, likely concludes that the trucks may be being readied for use in an upcoming militarized operation, whether being training or otherwise. Keep in mid that JADE HELM 15 is just around the corner.

“They are with this convoy”, said DAHBOO7, a YouTuber analyzing the footage.

JUST LIKE WALMART, A BLUE BELL FACILITY WAS RECENTLY SHUTDOWN AS WELL

At least one Blue Bell manufacturing plant, reportedly in Oklahoma, was shutdown due to a listeria outbreak, according to sources, fueling conspiracy theories further.

However a representative from Blue Bell contacted All News Pipeline in regards to the recent video, posted by DAHBOO777, which clearly shows the Blue Bell trucks traveling along side a military convoy in Colorado.

The representative made a statement to the agency saying that those were “trucks we are relocating from our closed branches to those that remain open. It just so happened that our trucks were traveling on the same highway as the military convoy, but there is no relation to their activity.”

On March 25, 2009 I appeared on the Alex Jones show to explain the mass graves being built ahead of the American peoples demise which I uncovered at a Phoenix cemetery.

Warning: the following videos may shock you.

SO WHAT DO THEY KNOW; HAVE PLANNED?

No one really knows for sure what ‘they’ (the Powers-That-Be) know or have planned. At least in the public realm; domain.

I mean the possibilities are endless. The planned ignition of Yellowstone, the New Madrid, an impending asteroid impact, a martial law takeover — there are so many. And all are good reasons for a government to deploy troops and equipment in advance. But as of yet the only thing we can do is keep our cameras handy and our heads on a swivel.

Send any pictures, tips, or information to [email protected]