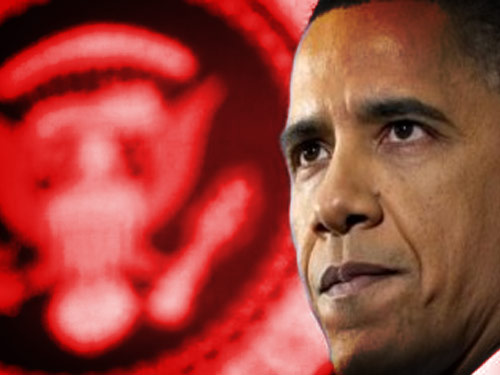 Apparently his pen and his phone are pretty much worthless this time.

President Barack Obama reupped his push Tuesday for the Senate to pass the USA Freedom Act by 12 a.m. Monday to avoid the Patriot Act’s surveillance authorities from going dark.

There’s just one problem with that. Doing so will almost certainly require the unanimous consent of all 100 senators…

Under Senate rules, there doesn’t appear to be a way around [Senator] Paul’s objections — or those of other senators, including Democrats Ron Wyden of Oregon and Martin Heinrich of New Mexico — without their consent…

Yeah, why aren’t they rushing to sign that blank check of Orwellian power to the NSA and other government spy agencies? Don’t make Emperor O throw a fit and stomp his feet now, Senators…

And Obama didn’t mince words. He said if the Senators don’t pass this “necessary” Patriot Act extension, we the American people simply will not be safe:

“If the Senate doesn’t act, then there is no way to prevent those authorities from expiring,” Earnest said. “And again, given that Senator McConnell has acknowledged that we’re operating in a high-threat period, he, as well as anyone, understands the kind of risk that’s associated with the Senate failing to do their job.”

Obama himself said the authorities are “necessary to keep us safe” in remarks at the White House.

On top of that, Josh Earnest has warned the U.S. is operating in a “high threat” period. Really, Mr.?

At this point, it’s kinda like those schools that have fire drills every other five minutes, so when there is a real fire and the alarms are going off and the building is burning down, no one even bothers to stop what they’re doing or even look up.

The people are numb to the pretense and the b.s. justifications at this point.

And come on already. “The USA Freedom Act”…? What a joke. Is anyone out there even still under the misguided notion any of us are free here?