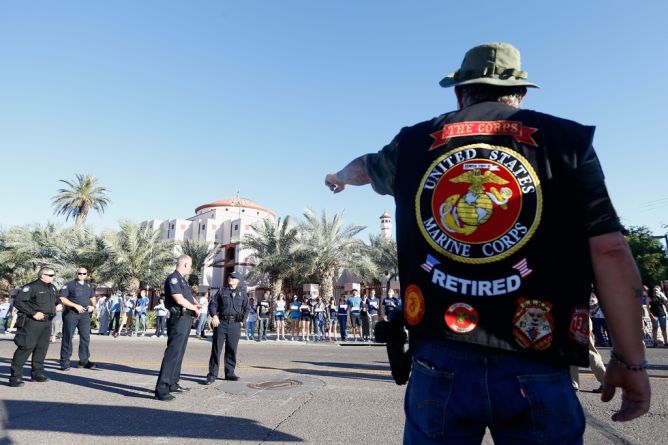 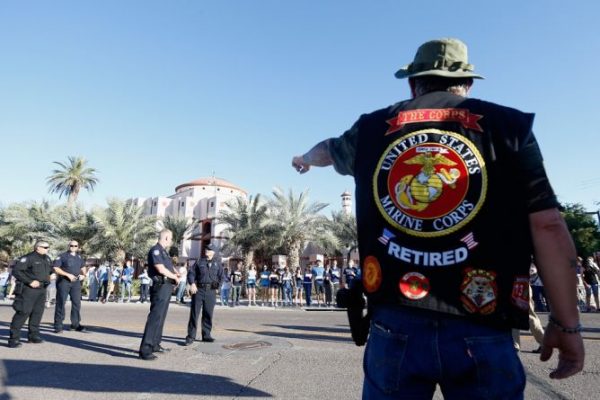 Friday, we reported that bikers were headed to Phoenix to protest the mosque that hatched the Garland Jihadis. Prior to the protest, Islamists took to the internet to say they would drink “Kuffar blood” at the event. Well, the event went off without so much as a beheading.

The protest, referred to as Freedom of Speech Rally Round II, took place at 6pm on Friday. In response to the event, Islamists took to Twitter to post threats against protesters, even posting the event organizer’s, Jon Ritzheimer, home address via Twitter.

Then, Islamists loudmouthed an attack on the event.

Did it stop the event? Did protesters cower in fear? Did they shrink back from cowardly Islamists? Nope. Just the opposite. They showed up in droves and stood their ground and no jihadis raised their devilish heads.

But make no mistake, they wanted the organizer, and other infidels dead. They just didn’t have any courage to even attempt it like the two in Garland.

However, leave it to communists to side with Islamists when it comes to free speech. The Huffington Post pushed the #NotMyAmerica Campaign against the mosque protest. According to a post at Huff Post:

The Campaign to Take On Hate, which works to challenge misconceptions of Muslims and Arab Americans, organized a Twitter campaign in response to news that a group of anti-Islam protesters would be demonstrating outside the Islamic Community Center in Phoenix, Arizona, Friday evening.

The group plans to hold a “Muhammad cartoon contest” before the demonstration at the mosque, according to a Facebook event for the protest.

Take On Hate has encouraged people to tweet their support for the mosque on Friday using the hashtag #NotMyAmerica, with the optional secondary hashtag #PHxMosque. Local clergy have also planned a peaceful solidarity event at the mosque on Monday.

Linda Sarsour, senior strategist for Take On Hate, told the Huffington Post, “In our America, freedom of speech should not be used to trump freedom of religion. All Americans have the right to worship free of fear and intimidation.”

The problem Sarsour has is that she is about Islam doing the reverse. The problem is two-fold. One is that freedom of speech is the right to speak the truth. Telling the truth about Islam and its founder, Muhammad, and about jihad is necessary. There is a 1,400-year track record to glean from. Second, the issue of religion should be addressed, but since America was founded as a Christian nation, should we not consider that the worship of false gods is not protected by the First Amendment? We are not talking about what one thinks. We are not even talking about the debate. What we are speaking of is the open practice of worshipping false gods in our culture.

Some of the pictures from the event showed that while many opposed Islam and supported free speech, they failed to provide anything in place for a moral code or the truth.

Retzheimer, for his part, told reporters that he plans on going into hiding following the protest.

“I’m having to go into hiding after this because they are calling lone wolfs to come in and behead me,” former U.S. Marine Jon Ritzheimer said. “That’s tyranny. That’s terrorism right here in America.”

Ritzheimer had taken to his Facebook to speak out against Islamic attacks on freedom of speech and against him and his family. He wrote:

This is the America that you who are against me want. You condone threats made to me and my family over a stupid cartoon. I have made no threats. I am simply bringing to light that our freedom of speech is under attack and this proves my case. I don’t think anyone should have to go into hiding for doing anything peaceful. This is not an Anti Islam Rally. This is a Pro Freedom of Speech Rally so don’t let the media twist it. I admit that what I am doing is stupid but so is stomping on the American flag and I support their rights and freedom to do so. That’s what’s supposed to make our country great. I will be at the Rally for a short time only because my address has been posted and my family has been threatened. That should sadden any true American. I hope our law makers can earn their paychecks and come up with better legislation that reinforces our first amendment. Again, I am hoping peace can be maintained between all the parties planning to attend tomorrow. President Obama said, “The future must not belong to those who insult Islam.” I am asking him to change his statement to The future must belong to those who have the FREEDOM to insult Islam if they want.” For those of you who are in support of this Rally, I thank you and I hope none of you have to endure what I am going through over this stupid rally.

At least 500 protesters were at the event according to the Associated Press, which probably means there were at least double that number.

Of course, designated terror group CAIR (Council on American-Islamic Relations) put out a statement in which they attempted to be the good guys after having one of their own cut off attendance by major reporters for their “Stand with the Prophet” conference in Garland, Texas. Because the citizens were armed is my guess as to why there was no attack. It seems CAIR knew that as well.

The CAIR statement acknowledged, “The rally’s organizer is calling on protesters to ‘to utilize there [sic] second amendment right at this event just in case our first amendment comes under the much-anticipated attack.'”

See? The Second Amendment does protect the First Amendment.

“We thank our federal and local law enforcement for their proactive effort to ensure the safety of the mosque’s congregation from hated-filled and armed protesters,” said CAIR-AZ Chairman Imraan Siddiqi. “The promise of a heavy police presence at the rally of armed biker gang members will help calm fears of harassment and even attacks on worshippers.”

Well, there was really no threat from the bikers or the protesters, was there? Nope. Those weapons were holstered defensively, just in case some of those with the same ideology as CAIR decided they wanted to go jihad on Friday. They would have met the same fate as the two in Garland, a quick death.

If you ask me, it seems that Pamela Geller and Geert Wilders are absolutely correct. The only way to deal with these people is to show them no fear.