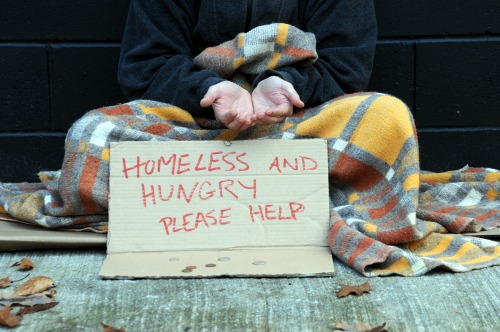 Homelessness in the U.S. is continuing to skyrocket, despite what the government would like us to believe.

And if you want to help your fellow Americans who are in need, well…there is a price to be paid.

You see, the government isn’t going to just LET you go out and feed hungry folks. Nope. Like pretty much ANYTHING else in this country, that will require a permit, and permits aren’t cheap.

The good people of a non-profit organization found this out the hard way.

Luke Rudkowski of We Are Change recently visited Los Angeles, California to talk to Cloud 9, which is a non-profit organization that has been helping the homeless.

Because no good deed goes unpunished, Cloud 9 recently had the government show up at a charity event and demand they pay over $400 for a permit in order to continue their work.

In April 2015, the LA Times reported that the city of Los Angeles spends roughly 100 million a year on homelessness, with a majority of that money going to the LAPD:

Almost 15,000 people the LAPD arrested in 2013 were homeless, or 14% of those arrested, according to the report from the city administrative office. Labor costs for the arrests were estimated between $46 million and $80 million.

If homeless people sleeping in their cars and vans fail to move along, police sometimes impound their cars, another lengthy procedure.

“Supports what we’ve been saying for years that this city is doing almost nothing to advance housing solutions but continues down the expensive and inhumane process of criminalization that only makes the problem worse,” said Becky Dennison of Los Angeles Community Action Network, a skid row advocacy group, in an email.

Indeed, being homeless – and feeding the homeless – are now considered crimes in many U.S. cities. And Tent cities have been bulldozed by order of governments – right in front of residents – who have nowhere else to go.

With a collapsing economy and abysmal employment statistics, the number of homeless and hungry Americans is likely to increase, unfortunately.

We Are Change asks that everyone please share this story in the hopes that it brings so much outrage that it can stop the government’s ludicrous actions against people who are trying to make a difference. We need each other now more than ever.