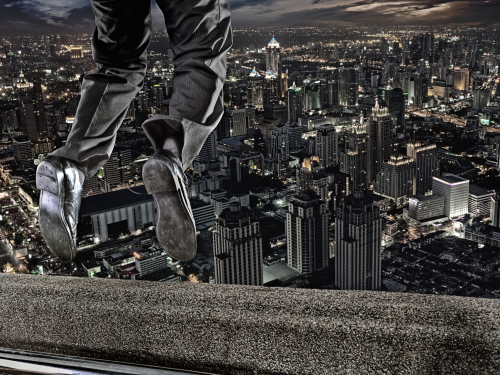 At this point, it’s hard to say how many bankers have killed themselves over the past two years, which is a troubling thought when you consider how “good” the economy is supposedly doing. On Thursday, another investment banker joined that ever-growing list, after he killed himself in New York City. He leapt from his home on the 24th floor of the Ocean Luxury Apartment Building and landed in the traffic below, leaving a grizzly scene for commuters. And as is all too common in our society today, after the impact mangled his body, tourists on an open air bus scrambled for their phones to take pictures.

Sources close to Thomas J. Hughes claim that he had tried to commit suicide earlier in the day. But by all accounts he was a highly educated, successful, and jovial man, though an abundance of drugs were found in his apartment by police. His father believes that may have had something to do with his death. “The only explanation is that I know he’s been working very hard and has been under a lot of pressure…I also know that sometimes when one is in that environment you can turn to alcohol or other types of drugs.”

Nobody is sure why Hughes killed himself, and no suicide note has been found. He was affluent, young, attractive, and had just returned from a vacation in the Bahamas. Whatever his reasons were, they’ve been taken to the grave like so many bankers before him.