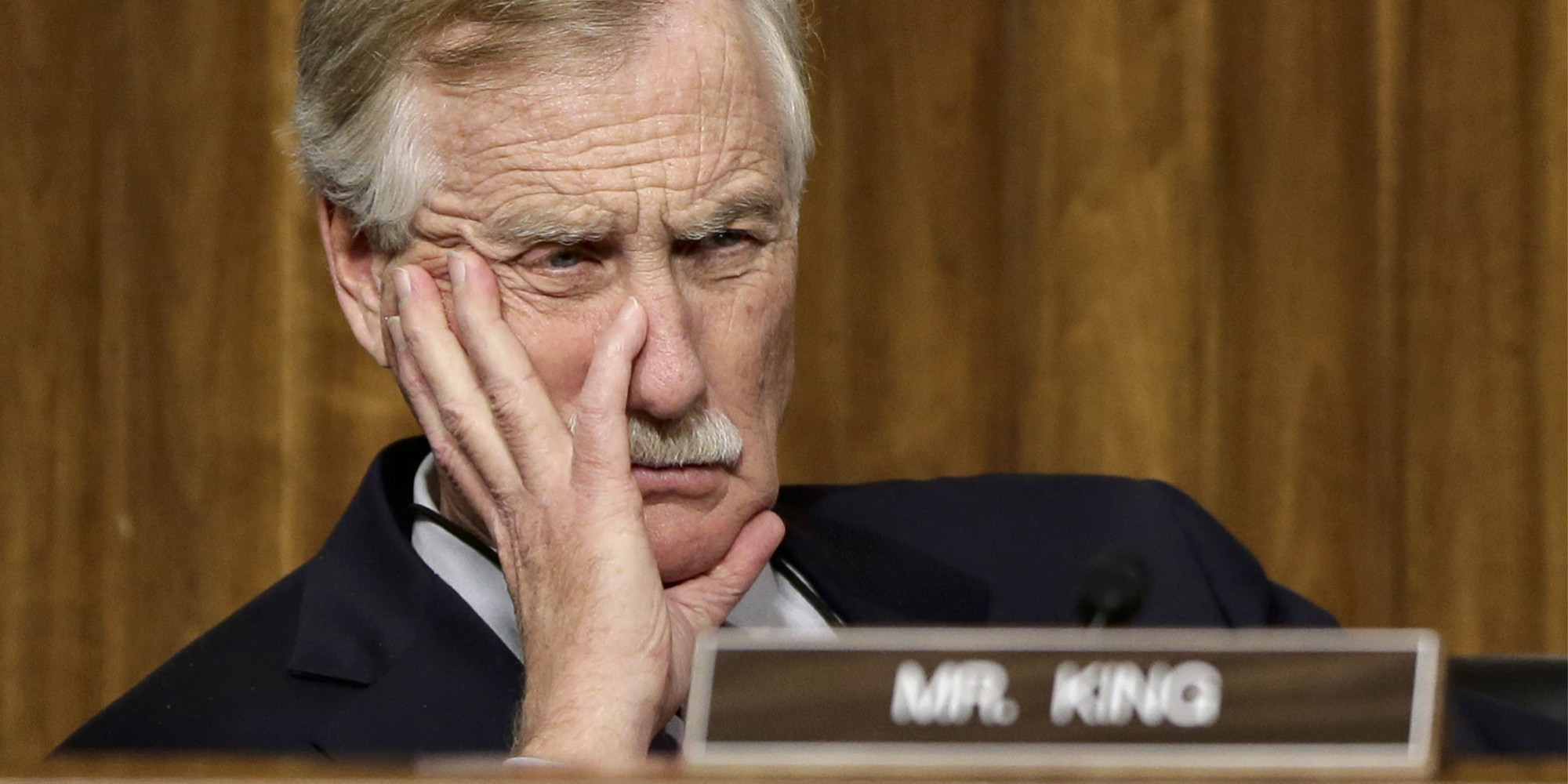 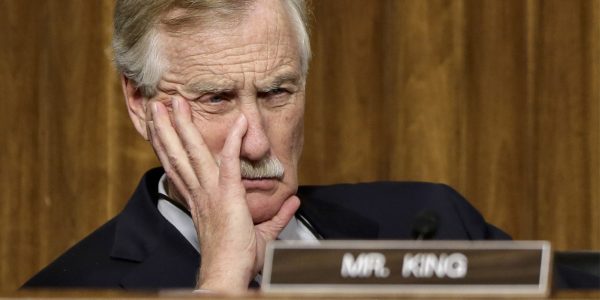 In these trying days of political dog and pony shows with every Mitch, John and Nancy telling the American people what the Constitution says, it behooves every American to have a couple of copies of the Constitution of the United States of America and read it thoroughly, each time some politicians tells you what’s in it. The latest interpretation of the Fourth Amendment to the Constitution has been brought forth by Sen. Angus King (I-ME). According to Sen. King, the Fourth amendment “is not absolute.”

On Sunday, during CNN’s “State of the Union,” Sen. King stated the Senate was attempting to balance “national security responsibilities” between the PATRIOT Act and Fourth Amendment and privacy rights.

Sen. King stated, “But the Fourth Amendment is not absolute. It said people shall be free of unreasonable searches and seizures. We are always trying to strike the balance between those two principles, in light of risk and in light of technology.”

The right of the people to be secure in their persons, houses, papers, and effects against unreasonable searches and seizures, shall not be violated , and no warrants shall issue, but upon probable cause, supported by oath or affirmation, and particularly describing the place to be searched, and the persons or things to be seized.

Sen. King, however, on CNN, still “strongly” advocates the protection of the privacy rights of Americans, except when we are under threat.

“We have to be aware that we are under a threat. And it strikes me as an unusual position for Senator Paul, for example, to be talking about essentially unilaterally disarming an important national security tool at a time when I have never seen the threat higher.”

This is King’s stance as a member of the Senate Intelligence Committee.

Again, though, King agrees with the USA Freedom Act, a revised version of the PATRIOT Act, where government would not be holding the telephone records of Americans; but, those records would be retained by the phone company – something phone companies have been doing since law enforcement obtained warrants in the past to search those of individuals whom they demonstrated probable cause. According to King himself, he has lobbied for two years to keep that data out of the hands of government. But, as there is always a “but” with King, there is no requirement on how long the phone companies are supposed to hold that data. He states that is his problem with the bill.

Of course, while on national television‘s best known liberal left leaning station, CNN, King made sure to point out that none of this would involve the “content” of any of those phone conversations reiterating “it’s just numbers.” His rationale follows along the lines of using the data “after the fact.”

“For example, the Tsarnaev brothers in Boston, right after the marathon, to be able to check their phone number and see who they had called around the country to determine whether this was a couple guys in Boston or a national plot.”

Does it not ring with King the PATRIOT Act was “sold” to the US citizenry as a means to “prevent” terrorist attacks on America by “finding” these people before they strike, not afterward? If you’re waiting until afterward, there is no reason to hoover everyone’s data. Another straw man argument in the stack of hay containing that “needle” they couldn’t find with a magnet and the highest powered microscope on earth.

And let’s be honest here. How many times have Americans witnessed official after official lie under oath about the activities of the NSA and its data collection program? James Clapper comes to mind here. Edward Snowden blew the lid off this data hoovering activity, yet each and every elected official in Washington who supports this violation forgets what this man exposed – and it’s more than phone numbers being collected. And does anyone remember the absolute hissy fit Diane Feinstein pitched when she found out the Senate Intelligence Committee computers were “accessed” by the spy agency? But again, it’s only phone numbers.

Sen. Rand Paul had it right when he said the government is “spending so much money on people for whom there is no suspicion that we don’t have enough time and money left to go after the people who would actually harm us.” Sen. Paul also contended that more money should be spent on the agents who analyze data and find particular suspects so they then can investigate their records. But, there it is again, all of this is dependent on “who” the government identifies as “suspects” who would actually harm America. As it stands right now, that is anyone and everyone in America, except actual terrorist organizations, the Muslim Brotherhood, CAIR, ISNA, ISIS, and the partridge in a pear tree sects of groups linked to Islam.

Obama “used” the IRS to “harass, intimidate, and attempt to silence” opposition by targeting “tea party” groups when applying for tax exempt status. That is more than minor. What could be done with all the data hoovered by NSA against any individual in the US, more specifically political opposition? Oh well, if you have nothing to hide, then you have nothing to fear. I think those groups targeted by the IRS might have something different to say about that.

The PATRIOT Act has expired, or parts of it anyway. The game plan now is to flood the TV, radio and newspapers sowing fear to continue to get US citizens to willfully relinquish their freedom, their privacy and their individual God-given rights. It is designed to garner support for the USA Freedom Act which is anything but freedom. It amounts to “throwing the public a bone” since the full breadth of NSA spying and data collection was exposed. These charlatans don’t want a full repeal of any spying or data collection program – they are pretty powerful with it in place. They are willing to “compromise” on the face of certain “collecting” to show the American public they are listening.

They are listening so much that Republicans exited en masse when Sen. Rand Paul retook to the Senate floor after the expiration deadline. They want what they want regardless of the limits placed on government in the Constitution.

How much did Americans really know about the extent of the spying and data collection until the revelations by Edward Snowden? Think of this. After the treatment of Edward Snowden, who would come forward now should any violations outside the USA Freedom Act occur? Can you really trust anything coming out of Washington, the NSA, DHS or any other agency engaged in the spying and data collection business when it has been shown they will lie under oath, lie on the Senate floor about the extent of it with documentation to prove otherwise – Sen. Tom Cotton – and continue to say they support privacy unequivocally, except when they don’t? And, knowing who the government has identified as “terrorists” and who they have not, can the people be so gullible to believe these charlatans are even remotely interested in the “safety” of US citizens?

The data collection and spying on the American public has brought us to the “surveillance state” which will lead to the full blow “police state.” The government is not about to relinquish this power or restore freedom, rights and liberties it has usurped. The USA Freedom Act, the revised version of the PATRIOT Act, will see to that. If it isn’t to their liking, they’ll just change the definition of words, phrases, etc. to continue the status quo. Nothing changes and nothing will change until the full repeal of the PATRIOT Act, the discarding of the USA Freedom Act, and dismantling of the spying/data collection machine against US citizens, along with the DHS.