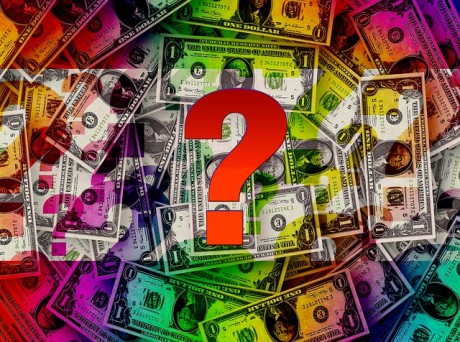 If we are not heading into a recession, why does our economy continue to act as if that is precisely what is happening?  As you will see below, we learned this week that factory orders have declined year over year for six months in a row.  That is something that has never happened outside of a time of recession.  We have also seen new orders for consumer goods fall dramatically.  In fact, the only time we have seen a more dramatic decline in that number was during the last recession.  And when you add these two items to what I have written about previously, the overall economic picture becomes even more disturbing.  Corporate profits have fallen for two quarters in a row, our exports fell by 7.6 percent during the first quarter of 2015, and U.S. GDP contracted by 0.7 percent during Q1.  Even though Barack Obama and the mainstream media are willingly ignoring them, the truth is that these numbers are absolutely screaming that we are going into a new recession.

Sometimes, a picture is worth more than a thousand words, and I believe that is certainly the case with the chart that I have posted below.  It comes from Zero Hedge, and it shows that factory orders have declined year over year for six months in a row.  The only times when this has ever happened before have been when the U.S. economy has been in recession… 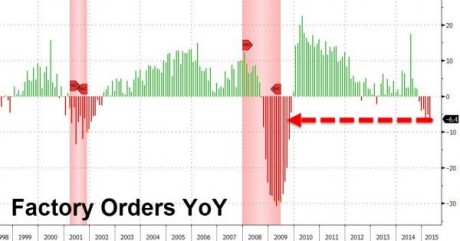 When we look at new orders for consumer goods, we see a similar thing happening.  This next chart comes from Charles Hugh Smith, and it really doesn’t need much explanation… 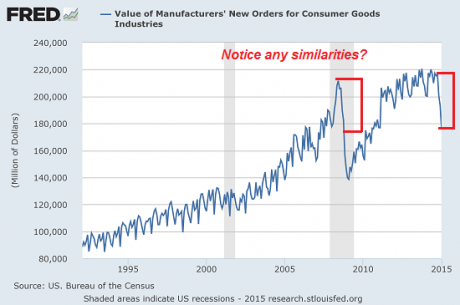 Here is another chart from Charles Hugh Smith.  This one shows the percentage change in new orders for consumer goods on a year over year basis… 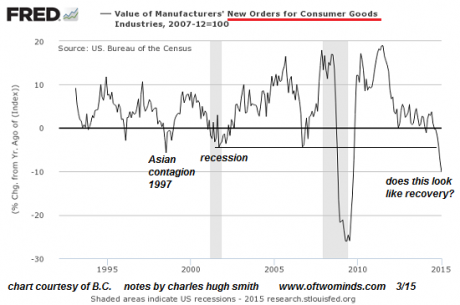 These charts that I just shared with you are rather compelling.  How anyone can see them and still believe that we are in an “economic recovery” is beyond me.

When the economy starts to turn, there are certain things that we look for.  As I have written about over and over on my website, so many of the exact same patterns that we have seen emerge just prior to previous economic downturns are happening again right now.

Yes, the stock market is still sitting pretty for the moment.  But almost everyone can see that it is massively overvalued and could start tanking at any time.  And when the market does start crashing it is just going to cause our economic problems to accelerate even more.

Sadly, most Americans are totally oblivious to all of this.

Most Americans just continue to do the same things that they have always done.  That includes going into ridiculous amounts of debt.  For instance, this week we learned that the percentage of auto loans that are being stretched out for periods of greater than 6 years is at an all-time high…

The average new car loan has reached a record 67 months, reports Experian, the Ireland-based information-services company. The percentage of loans with terms of 73 to 84 months also reached a new high of 29.5% in the first quarter of 2015, up from 24.9% a year earlier.

But you know what?

Even though most Americans are being exceedingly foolish and are living paycheck to paycheck, that still isn’t good enough for the boys and girls on Wall Street.

Do you know the American economy is counting on you? We can’t count on the rest of the world to spend money on our stuff. The rest of the world is in an even worse mood than you are. You should feel lucky you’re not a Greek consumer. And China, well they’re truly struggling there just to reach the very modest goal of 7% growth.

The Federal Reserve is counting on you too. Fed officials want to start raising the cost of your borrowing because they worry they’ve been giving you a free ride for too long with zero interest rates. We listen to Fed officials all of the time here at The Wall Street Journal, and they just can’t figure you out.

Please let us know the problem. You can reach us at any of the emails below.

They just want all of us to keep borrowing and spending our way into oblivion.  But of course when things do fall apart and millions of Americans can’t pay their debts, they will be there to foreclose on our homes and repossess our vehicles without any hesitation.

And when the next major economic downturn does strike, don’t expect the rest of the planet to feel sorry for us.  We like to think that the rest of the world looks up to us, but the exact opposite is actually true.  At this point, much of the globe is pointing fingers at us and mocking us.  Just consider the following excerpt from an article that appeared in Pravda…

The land of illusion; the land of entertainment producing songs and movies to warp reality. People pretending to be something they are not. Likewise, Washington DC has people who pretend to represent the people’s interests. Pretending to bring hope and a change for the better. Pretending to bring unity and peace among all races. Lying through their teeth and laughing like clowns behind closed doors. Setting up a consumer based economy forcing the once mighty middle class to shrink and work at customer service jobs. “Ya want fries with that?“

It would be easy to dismiss that paragraph as “Russian propaganda”, but the cold, hard reality of the matter is that there is nothing in that quote that is not true.

They are mocking us, and they are dead on.  We are the land of illusion.  We do have a shrinking middle class.  And we are definitely addicted to entertainment.  If you doubt this, just check out what one study recently found…

If you weren’t reading this article, you would probably be scanning something else on the internet, watching TV, or maybe—just maybe—reading a newspaper or magazine. In short, you would be consuming media.

On average, people spend more than 490 minutes of their day with some sort of media, according to a new report by ZenithOptimedia. Television remains dominant, accounting for three hours of daily consumption—an hour more than the internet, in second place.

Other studies have actually discovered that the amount of time that Americans spend connected to media is even greater.  This is something that I discussed in a previous article entitled “How Much Time Do Americans Spend Plugged Into The Matrix Every Day?”

For the moment, the mainstream media is assuring everyone that everything is going to be just fine and that they should go out and spend lots and lots of money.

But instead of spending your money on frivolous things like boats, electronic toys and expensive vacations, I believe that now is the time to get prepared for the great economic crisis which is currently starting to unfold.

Right now, I know that most people don’t actually believe that life in America is about to dramatically change.

So many of the things that people (including myself) have been warning about for so long are about to happen.  Our politicians and national leaders have turned a deaf ear to all of the warnings and have continued to conduct business as usual.  Soon, the error of their ways will be apparent to all.

We are heading into the greatest economic crisis in U.S. history, and there is going to be no coming back to the false, debt-fueled “prosperity” that we are enjoying today.