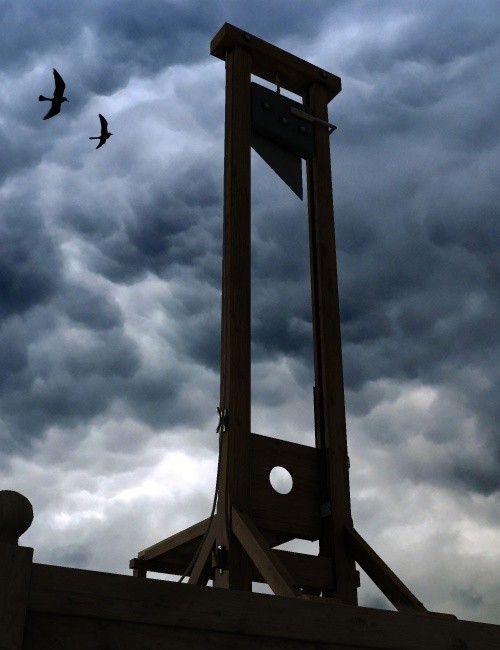 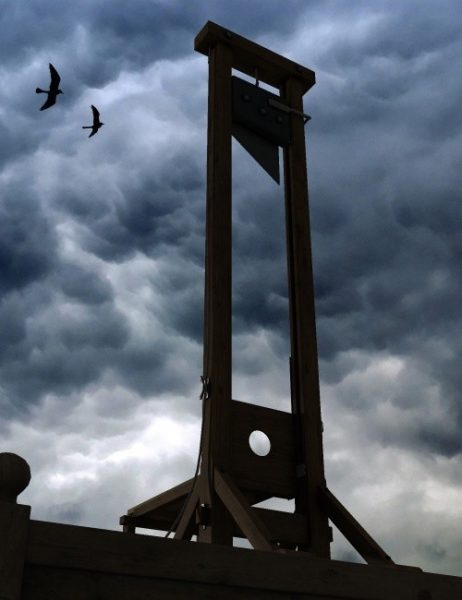 The following is one of the most lucid accounts of FM 3-39.4 and FEMA camp detention. It is worthy of viewing and will help legitimize the question: Will beheadings ever become part of the FEMA camp experience?

The guillotine has never been used inside of the United States. The United States has executed people by firing squad, hanging, the electric chair and lethal injection. Claims that the guillotine will be used on American soil against Americans, seem ludicrous on its face. However, several dots are connecting which casts serious doubt on that assumption.

Former FBI agent, the late Ted Gunderson, has a very mixed level of credibility among the Patriot community. However, nobody can accuse Gunderson as being incorrect when it came to assessing the depth and depravity of child sex trafficking. Gunderson is quite clear when he says that Guillotines will be used against political dissidents.

Gunderson’s guillotine claims are historically bolstered by Representative Doug Teper, of the Georgia Legislative Assembly (Democrat) who introduced a bill which would supplant the method of execution, the electric chair, with the guillotine back in 1995-6? The referenced bill was Georgia State House Bill (1995-6) HB 1274– Death penalty; guillotine provisions. Certainly, Teper would have never thought that this was possible is there were not already guillotines inside of the United States.

If your cognitive bias does not permit you to take Gunderson and Teper seriously when it comes to guillotines, how about the Bible? Does the Bible have credibility in your eyes?

The Bible reveals in Revelation 20:4 that Christians worldwide will be beheaded for their faith and refusal to participate in a satanic world government under the spirit of antichrist as outlined in Revelation 13.

As you read the following two paragraphs, there is a collision between two cultures and two religions which is already underway and religious dogma is serving to perpetuate and exacerbate the conflict.

4 “Then I saw thrones, and they sat on them, and judgment was given to them. And I saw the souls of those who had been beheaded because of their testimony of Jesus and because of the word of God, and those who had not worshiped the beast or his image, and had not received the mark on their forehead and on their hand; and they came to life and reigned with Christ for a thousand years”.

And who will behead these Christians? Take a look at Sura (chapter) 47 contains the ayah (verse): “When you encounter the unbelievers …. [26] He and his followers beheaded opponents, Christian and Muslim alike…”  Sura 8 [al-Anfal]:12 states “I will cast dread into the hearts of the … caliphs beheaded tens of thousands of Christians (admittedly many of them …  This is the justification for ISIS to be performing these heinous acts against Christians.

It is clear that both Christianity and Islam foretells a time when non-believing infidels (i.e. Christians) will be beheaded by radical Muslim extremists (i.e. ISIS). It is also clear that this prophecy is being fulfilled in our time.

Will these acts be carried out on American soil and against American Christians and Jews? The following does not specifically speak to the intended persecution of Christians and Jews, but the playing field to do such a thing has clearly been established. Every American should be outraged by the following references to FM 39.40 which provides the means to carry out such heinous acts.

The Fast and Furious Component of Guillotines

Today, my sources tell me that guillotines are manufactured by front companies in China which are controlled by the Chinese military. The component parts are subsequently shipped to the Muslim Brotherhood and they are reshipped to Peru where the world’s biggest drug dealers, the Sanchez-Paredes cartel assembles the guillotines and ships them to various locations controlled by ISIS.

A month ago, I interviewed former Army Special Operations officer, Scott Bennett, the author of many ARSOF psyops programs, about the funding of the CIA through Swiss banks accounts. Along the lines of the Bennett revelations, I have learned that exotic weaponry, such as guillotines, are funded in the same manner.

Has anyone else ever noted that since the Mexican drug cartels became involved with Middle Eastern terrorist groups, that beheadings have become the modus operandi for the cartels?

I get understandably nervous, at the prospect of guillotines on American soil, as I watch the endless series of beheadings of Christians in the Middle East by the radical ISIS. The following represents a small sample size of what is happening to Christians and their subsequent mass beheadings at the hands of ISIS.

More than 250000 Christians have fled Northern Iraq amidst ISIS … to Islam or death bybeheading, the children chose to follow Jesus…

National spokesman for Iraqi Christians and Chaldean-American … out by ISIS militants in Iraq now includes shocking beheadings of children, …

Notice that Christians are the victims?

Have you ever heard the allegations which accuse some doctors, primarily in China, of killing patients in order to sell their organs on the black market?

After you read the following paragraphs, you may conclude that those rumors are true. When Representative Teper was asked about his motivation to exclusively use the guillotine to execute death row inmates, he said, it would allow for death-row inmates as organ donors. The very spooky Teper further reasoned that the “Blade makes a clean cut and leaves vital organs intact.”  I will be happy to let this statement speak for itself. Below is a draft of the legislation.

1- 8  The General Assembly finds that while prisoners condemned to
1- 9  death may wish to donate one or more of their organs for
1-10  transplant, any such desire is thwarted by the fact that
1-11  electrocution makes all such organs unsuitable for
1-12  transplant. The intent of the General Assembly in enacting
1-13  this legislation is to provide for a method of execution
1-14  which is compatible with the donation of organs by a
1-15  condemned prisoner.

We have precedent for the beheading of Christians by radical Muslim forces, we have religious doctrine calling for the beheading of non-Islamic believers, we now have the “camps” where these acts could be perpetrated against American Christians and we have pastors hired to calm the people but they cannot mention Jesus or the Bible. We should all be connecting the dots.

People should be able to practice their religion without infringing on the rights of nonbelievers. However, when one doctrine demands beheadings for nonbelievers, then we have  a problem. And when the United Nations is mandating that the U.S. must accept 70,000 Muslim immigrants, maybe we should all be paying closer attention to the nature of the people being admitted to the country. Inexecusably, the FBI has said that they do not have the resources to properly screen these immigrants, under the Refugee/Resettlement UN program. Idaho was the most recent site for relocation as 9,000 Syrians were recently deposited in the state. Many are viewing this program as a ticking time bomb.

As ISIS incursions increase in number and intensity, such as the one we recently witnessed in Garland, TX, we should consider the fact that we are going to see beheadings of American citizens on American soil. We know that Muslim terror groups traffick in guns, drugs and children. Is trafficking in organs that far fetched? Therefore, many are asking the question if beheadings will become a part of official doctrine and policy at FEMA camps under FM 3-39.4? Well, the document does provide that foreign troops will be trained to work in the camps and that these foreign troops will be training more foreign troops to work in the camps.

Will ISIS personnel be recruited to work in the camps as the executioners? Well, is ISIS funded by the CIA? Did Eric Holder oversee Fast and Furious? Do the guillotines represent a new flavor of Fast and Furious? Will this be the fate of political dissidents extracted by Jade Helm.

In my estimation, there is no question that guillotines represent a form of Fast and Furious and the American people will be the intended targets. Will the elite also make money in the Black Market organ trading business? Will they team up with these terrorists? There are lot of dots that are connecting for there not to be some real substance to these events!

OUR FEATURED GUEST ON THE COMMON SENSE SHOW, THIS SUNDAY, IS STEVE QUAYLE. STEVE WILL BE WITH US FOR THE FIRST TWO HOURS FROM 6PM TO 8PM (MOUNTAIN); 8PM TO 10 PM (EASTERN)!

In large part, The Common Sense Show is listener/reader supported, we thank you for your kind donations which enables us to carry out our research, reporting and broadcast efforts.

How to Listen to The Common Sense Show:

PLEASE NOTE THAT THE COMMON SENSE SHOW WILL MOVE TO 7PM (CENTRAL) AND WILL STILL BE BROADCAST EVERY SUNDAY NIGHT BEGINNING ON MAY 31, 2015

“FREEING AMERICA ONE ENSLAVED MIND AT A TIME!”

© 2015 Copyright Dave Hodges – The Common Sense Show. All Rights reserved. No article, or radio show archive may be reproduced, republished or redistributed in any form without the express permission of Dave Hodges and/or DH Communications.