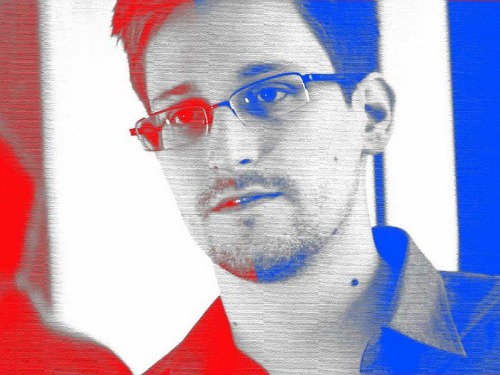 Another Snowden leak is out.

It’s not just the Patriot Act. The NSA has another secret legal interpretation of surveillance law. http://t.co/iPOdzQGUql #SnowdenDocs

Via The New York Times:

Without public notice or debate, the Obama administration has expanded the National Security Agency‘s warrantless surveillance of Americans’ international Internet traffic to search for evidence of malicious computer hacking, according to classified N.S.A. documents.

In mid-2012, Justice Department lawyers wrote two secret memos permitting the spy agency to begin hunting on Internet cables, without a warrant and on American soil, for data linked to computer intrusions originating abroad — including traffic that flows to suspicious Internet addresses or contains malware, the documents show.

More government overreach, more trampling on the Constitution, more walking all over our freedoms without a warrant, more 1984 in your face…

The government surveillance apparatus has been turned against the people. The entire system is more about us than some nebulous foreign boogeymen which were used to justify its creation in the first place.

But let’s be honest with ourselves for a moment.

I put Snowden’s name in the title of this article, so it’s frankly surprising anyone is even reading it.

Why is that, do you think?

Because Snowden’s slow-drip leaks are expertly timed to do exactly what they were always designed to as the psyop against the American people that they are: get you slowly accustomed to the government overreach piecemeal while providing a steam valve for your anger against a tyrannical system that is here to stay.

We are being socially engineered, here. Slowly conditioned to accept our own big brother enslavement.

In that way, Snowden is doing his job.

Jon Rappoport explained this perfectly (his emphasis, followed by mine):

It’s all about keeping the NSA story alive, in order that people know they’re being spied on 24/7. That’s the social engineering aspect. That’s the game.

And in that regard, the slow-drip method of releasing Snowden files is quite useful. It appears to be a smart journalistic strategy, to “keep the issue before the public so that a true debate about government secrecy and spying can take place.”

But the debate isn’t effective. The NSA isn’t being curbed. If one of its channels of snooping is cut back, another one will emerge.

Meanwhile, they’re continuing to drag this out longer than the credits for a Pirates of the Caribbean movie,  the bottom line is nothing. Ever. Changes.

You have to admit… if Snowden’s leaks are so detrimental to the public debate on government spying, why not release it all at once? It has been over two years now. Can this really all be chalked up to sensationalism and journalistic strategy this many years on when the very thing we’re still “debating” is our rights and freedoms against government snooping? Against the death of our Fourth Amendment?

Remember how outraged people were in the beginning, the summer of 2013, when the first leaks came out?

And has much changed in that time? Yes, but not in the way of our freedom…

Look at how desensitized the country is to it now, two years later.

Now when a Snowden leak comes out, they don’t even bother to put the word “shocking” in the article title…

Now you can put Snowden’s name in an article title and rest assured people will see it, yawn, stretch, maybe scan the info, but ultimately and quietly accept this is just how things are now.