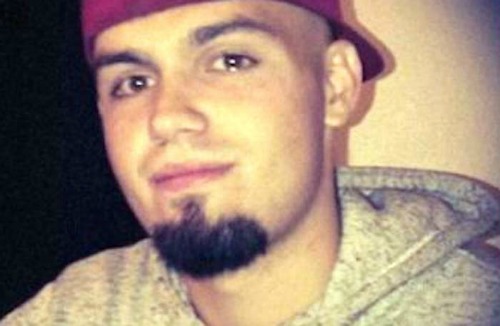 On August 11, 2014, Dillon Taylor, his brother, and his cousin were exiting a 7-Eleven in Salt Lake City when police arrived on the scene.

They were responding to a 911 call about a “guy flashing a gun.”

On September 30, Salt Lake County District Attorney Sim Gill said that Officer Bron Cruz was justified in shooting Dillon because he was “non-compliant” when confronted by officers:

“Nothing that Mr. Taylor did assisted in de-escalating the situation,” Gill said. “If anything, it escalated things.”

Last August, the district attorney released only a portion of the body camera footage when ruling the shooting justified.

Now the entirety of the body cam footage has been posted to YouTube by Dillon’s aunt, Gina Thayne.

It is possibly the MOST graphic police shooting video I have ever seen – and unfortunately, I’ve seen a lot.

I can’t emphasize enough how disturbing this video is. Please watch with caution.

I’ve watched this video many times, with the goal of making sense of it all.

And every time I view it, more questions arise.

On January 20, 2015, Salt Lake City publicly released the October 17 Police Civilian Review Board findings after previously insisting the report was private, based on the claim that it was a personnel record.

The Salt Lake Tribune summarized the findings from the report. Here are some excerpts:

The civilian review panel found that Cruz feared for his life and therefore was within police policy guidelines to use lethal force.

Taylor had his hands in his baggy sweatpants, leading Cruz to believe he had a gun, according to the report released to the Tribune. The shooting was recorded on the officer’s body camera.

District Attorney Sim Gill had earlier found that Cruz was not in violation of police policy when he killed Taylor because the officer feared for his life.

Cruz saw three men in the store parking lot. He could see the hands of two men but Taylor’s hands were not visible as he turned and began walking away from Cruz.

Cruz ordered Taylor to stop and remove his hands. Taylor took several more steps and then stopped and turned toward the officer. Taylor pulled his hands out of his pants and raised his shirt when he was shot.

“From the officer’s point of view, he believed one of the three was reportedly armed,” the report stated. “And when first contact is made, one of the three began to walk away from the scene.”

Former mayor Rocky Anderson, who is now in private practice as an attorney, said the review board’s finding in this case is “utterly outrageous”:

“That means that nobody is safe on the streets. Police don’t even have to see a gun before they shoot someone dead.”

Anderson said his review of the police video ­— which was previously released — shows Taylor was doing what the officer ordered. “He was attempting to lift his shirt to show he didn’t have a gun.”

The time from contact with Dillon to Cruz shooting him in the chest and abdomen was about 20 seconds.

Gill said Dillon did nothing to “assist in de-escalating the situation,” but did he even have time to?

Kelly Fowler, the attorney for Dillon’s family, said Cruz gave Taylor no time to resolve the conflicting orders being given by the police before shooting him:

“His brother and cousin [said they] were confused. They had all these officers yelling at them, ‘Put your hands up!’ ‘Get on the ground.’ Where’s the time to comply?”

Fowler added that the shooting of an unarmed man shows more broadly that police culture has grown inordinately paranoid and hostile toward the public — and that Gill’s investigation indulges that paranoia:

“They went into this expecting a certain outcome,” Fowler said.

Could that be because of things the 911 caller said?

Have a listen and see what you think:

The 911 caller referred to seeing “gangbangers” at the beginning of the call.

Fox13 posted details from the call:

“They are obviously looking for trouble just the way they look.”

“We’re almost at 21st South, the guy in the red hat has a gun. The guy flashed his gun, the kid flashed a gun as he was walking by. They are looking for trouble that’s all I see.”

Dispatch questioned, “What race was he, was he Hispanic, white, black?”

During the caller’s response she referred to another person.

Dispatch then asked, “Are you or anyone else in immediate danger?”

The caller responded: “No, not at all. I just thought I ought to report this, they look suspicious.”

Now, consider some of the things Officer Cruz told investigators:

“He was digging at something. He was manipulating something. I knew there was a gun in those pants.”

“I was scared to death. The last thought I had go through my mind when I pulled the trigger … was that ‘I was too late. I was too late.’ And because of that I was gonna get killed.”

“And I knew he’d already made up his mind and he just…I was just giving him time to just kill one of us.”

“I was 100 percent, 100 percent convinced when I saw him turn around it was gonna be a gunfight. I knew he had that gun, that he’d be trying to kill us.”

Dillon was doomed from the beginning. He never had a chance.

Page 7 of the review board makes the claim that Officer Cruz “tried to provide life saving first aid, but Dillon expired from the gunshot wounds.”

When an officer offered more bandages, Cruz said, “I don’t know where the other shot went.” The footage does not show him searching for the second wound, which was on Taylor’s chest.

But he appeared to be looking for the gun Dillon supposedly had.

Other questions remain, and will likely never be answered.

Was Dillon drunk? He reportedly had blood alcohol content of .18, which is well above the legal driving limit. But even if he was, does it matter, other than to perhaps make him slower to respond to the officers’ commands?

Is it possible that he didn’t hear the officers’ commands? He appeared to be wearing headphones in the video. His family members say he was wearing them. Even though he saw Cruz pointing a gun at him, is it possible he was disoriented and wasn’t fully comprehending what was going on?

Was lethal force necessary? Could a Taser been used to subdue him instead?

On the video, Cruz is heard saying “What the hell were you reaching for, man?” as Dillon lay dying (or perhaps was already dead) – was the officer setting up the narrative, or did he really believe Taylor was reaching for a gun?

Fowler told SLT she suspects the events leading up to the shooting, from the 911 call to the pull of the trigger, stem from assumptions and “profiling”:

“The officer is going into this with a biased viewpoint, expecting this to happen. … Why do officers have this mind-set? When you’re a hammer, all you’re going to see is nails,” Fowler said. “It makes me wonder … anybody who has a brother, cousin, nephew, or daughter who looks a little left of center, a little edgy, that’s what’s going to happen?”

Was this shooting justified, or could the situation have been handled differently?