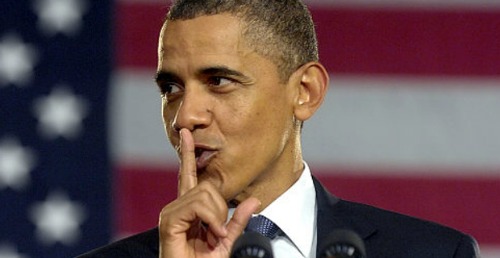 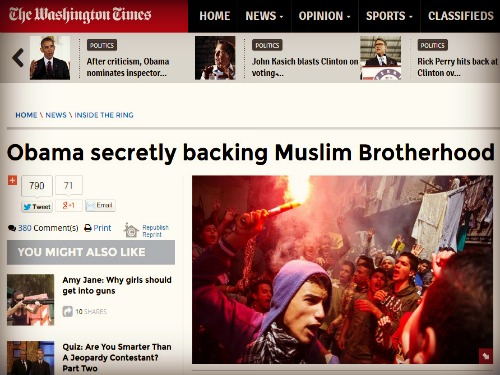 President Obama and his administration continue to support the global Islamist militant group known the Muslim Brotherhood. A White House strategy document regards the group as a moderate alternative to more violent Islamist groups like al Qaeda and the Islamic State.

The policy of backing the Muslim Brotherhood is outlined in a secret directive called Presidential Study Directive-11, or PSD-11. The directive was produced in 2011 and outlines administration support for political reform in the Middle East and North Africa, according to officials familiar with the classified study.

Efforts to force the administration to release the directive or portions of it under the Freedom of Information Act have been unsuccessful.

But it’s a revelation because he was “secretly” doing this.

Again. The only response I can think of takes me back to middle school: DUH.

Who was this really a secret to?

Was it when Muslim Brotherhood-linked Rashad Hussain joined the White House counsel’s office in January 2009, right from the beginning? Was it when Obama appointed him United States Special Envoy to the Organisation of Islamic Cooperation in February 2010? Most recently he was upgraded to head “Center for Strategic Counterterrorism Communications.” Give us a break.

Was it when Hillary Clinton and the Obama State Department attempted to put the Muslim Brotherhood in charge in Libya after overtly toppling Gaddafi? Syria was/is next on that list…

Isn’t that part of why our government fomented the Arab Spring in the first place?

How about when the U.S. officially recognized the Muslim Brotherhood in 2011? At that time, a high-ranking U.S. government official was anonymously quoted by Reuters as saying, “The political landscape in Egypt has changed, and is changing… It is in our interests to engage with all of the parties that are competing for parliament or the presidency.”

Here’s another headline that must’ve been missed from from 2011: Clinton: U.S. engagement of Muslim Brotherhood not new policy.

Or this one, same year: Annals of the Arab Spring: Obama Administration Backs Muslim Brotherhood in Syria

Hell, my own mom was talking about this back in 2011… I just checked and I have emails to prove it.

How about when our government gave them a billion dollars in military aid in 2012?

How about more recently when Obama basically met with members of the Muslim Brotherhood in the White House back in February? Oh, sorry it was reported as, “a select few individuals with disturbingly close ties to the global Muslim Brotherhood.” Whatever.

Again, there is nothing remotely “secret” about this. It’s pretty much on the record, out in the open in everyone’s face. The only thing shocking about this “secret” story revelation is how ridiculous that headline looks over at the Washington Times.

Can this even really be considered “news” the way it has been reported? This illustrates just one of the many reasons why people are turning to alternative media sources for actual news.