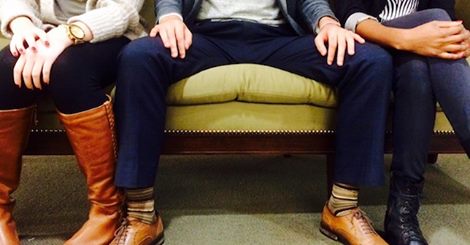 For months now, the Transit Authority in New York City has been advertising their request that men riding trains, subways and buses keep their legs together when using mass transit. The sin is called “manspreading,” and it happens when a male passenger chooses to sit with their legs lightly spread apart forcing other passengers to have less room in their own seat.

Here’s an example of this heinous new form of “misogyny.”

Do you think that this “crime” could possibly be a farce? Perhaps a false story that was published by a fake news organization like the Onion? Nope – it’s real and the cops in New York have just arrested the first of presumably many “manspreaders.”

It’s disgusting. Pure and simple. The government in New York City has once again proven that they are willing to regulate and govern, even the most trivial of daily exercises. While “manspreading” may be annoying for other transit passengers – it is by no means a matter for the criminal justice system. Will fat people be arrested for having larger than normal rear ends? Will women who place their bags on their laps or in the seat next them also be accosted? Do skinny people get to have a whole seat to themselves – even if they fit in half a seat? Can a skinny person “manspread” if they don’t take up more than one seat of space? If so, does this mean that “manspreading” is okay – so long as you are not bothering those around you?

It’s patently ridiculous. Even for New York – home of the big soda and MSG bans. I know that New Yorkers enjoy it when the government tells them what to do, but it’d be nice if a few of them would stand up and tell their local masters to let them sit how they want to sit.