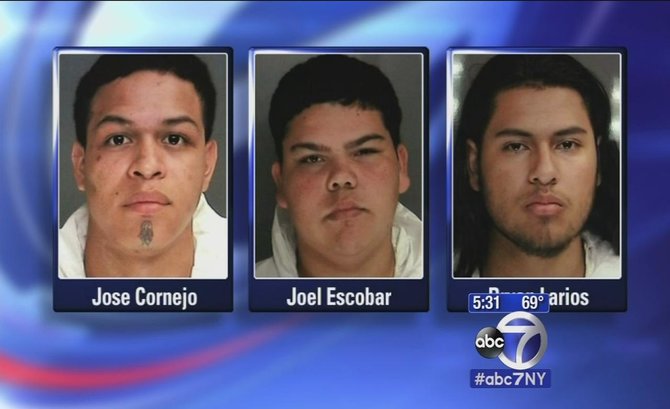 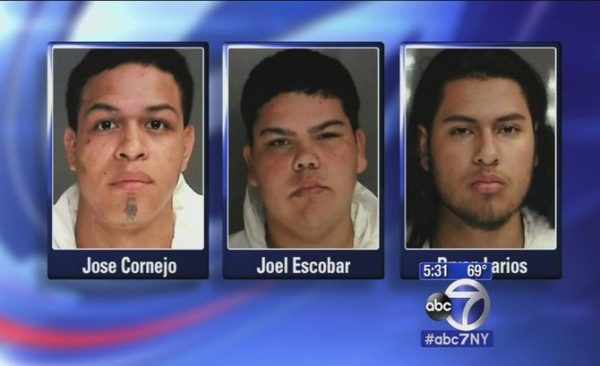 Three teenage members of the infamous MS-13 gang were held without bail on Friday, charged with forcing a 16-year-old girl into the woods of a golf course in Long Island and raping her.

The three suspects have been identified as 17-year-old Jose Cornejo, 18-year-old Bryan Larios and 17-year-old Joel Escobar, all of Brentwood.

The three are accused of approaching the girl and a male friend at a Brentwood middle school at about 6 p.m.

They allegedly robbed and beat the friend, who then fled the scene.

The trio then allegedly told the girl they had a weapon and forced her to walk about a half-mile to a secluded area of the Brentwood Country Club golf course.

It was there, prosecutors said, that Cornejo and Escobar raped the girl while Larios acted as a lookout.

All three are from El Salvador and are members of the MS-13 street gang. Bryan Larios, 18, left and right, Joel Escobar, 17.

She was later found walking out of the woods nearly naked by golfers, who called police.

“This is one of the most brutal, heinous crimes that I have seen in a long, long time,” Suffolk County District Attorney Thomas Spota said.

A fourth man, who was unnamed but also suspected of being part of the MS-13 gang, were charged with robbing and beating a man in April at their school.

Of course, their attorney is attempting to use their age in the matter, saying they were high school students, but Assistant District Attorney Lawrence Opisso said he does not believe that any of the suspects attend school.

The gang that began in California, now boasts more than 70,000 members.

Perhaps if these men were found guilty of these crimes and a swift, permanent punishment were rendered, it might just send a message to the rest of those who want to engage in this kind of criminal behavior.