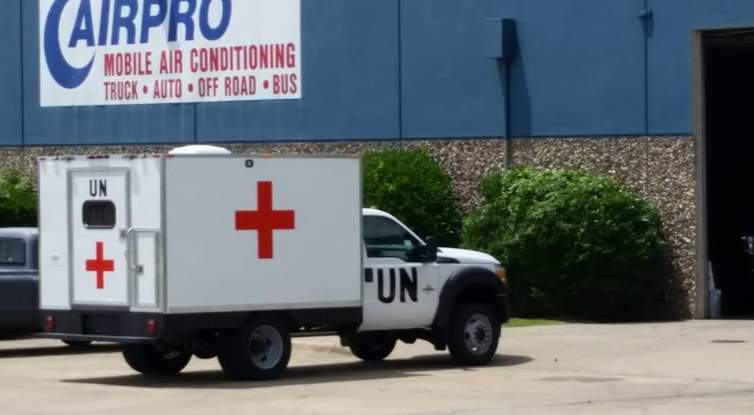 (INTELLIHUB) — Throughout the last two and a half months many in the alternative media, including Intellihub News, have documented an unexplained massive buildup of military movements around the country as well as numerous realistic training exercises with a strong domestic hint.

Taken by themselves, each convoy sighting or urban military drill may not seem like much but when you consider them not as single events but as a series of connected preparations for some sort of impending civil unrest in America, a startling picture emerges.

Now, even more information has come in, including a military convoy spotted in Lucinda, Mississippi carrying Mobile 155 Howitzers and stopping at a weight station that just so happened to have a Walmart truck parked in the same area.

The Walmart truck being in the same area could somehow be yet another coincidence surrounding Walmart and the buildup around Jade Helm but one has to ask themselves how many times they are going to discount a connection?

“Mobile 155 Howitzers …Rolling West Bound out of Alabama into and through Mississippi,” read the videos description.

Although many different patriots are publishing outstanding footage of military movements throughout the country, one YouTuber has perhaps done more than anyone else to get this footage out.

Dahboo777, as he is known on YouTube, has received a flurry of emails containing different footage taken by his subscribers throughout the country. In searching through that footage he was able to document a connection to both FEMA and the United Nations within the overall military buildup leading into Jade Helm 2015.

His latest compilation of footage details the fact that many of the people who have sent him footage have lived in their homes for 20-30 years and have never seen the type of movements they are seeing now.

“Most people only know to label it as Jade Helm because that’s the big drill most folks have heard of at this point.

The problem is, all of this has been well in advance of Jade Helm 15 and also includes states that were never listed in the Operation.”

In regards to the United Nations vehicle, Dahboo highlighted the fact that this was the fifth or sixth time that footage of UN vehicles had been seen since the announcement of Jade Helm.

Footage of increased military movements and possibly related realistic training exercises continues to pour in with no end in sight especially with the official start of Jade Helm on the horizon. At this point no one knows what this all means but the fact remains that this is something that has not been seen in this country in a very long time.

In closing, the below photo was taken in Colorado and could be connected to Raider Focus. The convoy apparently contained earth moving equipment.