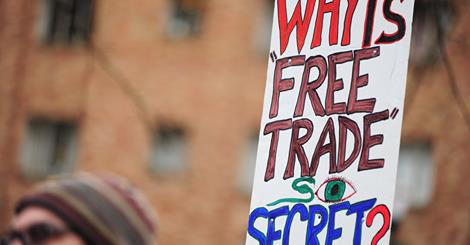 Everyone in Congress is either brain-dead, an idiot, insane or they are actively working to destroy the United States while thumbing their nose at every citizen in the nation. It has to be the latter as the Senate voted on Friday to allow Obama “fast-track” authority on the Trans-Pacific Partnership (TPP), aka Obamatrade. It has now gone to the House where Rep. Duncan Hunter (R-CA) is pressuring the GOP majority leader, Rep. Kevin McCarthy (R-CA) to delay the fast-track on Obamatrade.

Breitbart exclusively obtained the letter Hunter wrote McCarthy. In it, Hunter asks McCarthy to “slow down and consider the ramifications of what it is doing.”

In the letter to McCarthy, Hunter wrote, “I write to you today to request that you delay any vote on fast-track authority for the Executive until the President has made public all text and information pertaining to the new economic union known as the Trans-Pacific Partnership Commission, as well as the ‘Living Agreement’ authority. My concern is that this allows the President and the members of the union to change the agreement and its membership following adoption.”

Hunter has a valid point. It seems very few in the House or the Senate have even read the bill. Those who have are under a “gag” order they voluntarily participate in by signing a non-disclosure statement while ignoring their oath of office. These individuals are voting to basically “pre-approve” a trade deal that no one knows exactly what is in it and a deal that could change after “fast-track” approval. In other words, our representatives are committing the taxpayer to a deal they haven’t read and the people know nothing about except what has been leaked.

What is known about in the TPP is the “Living Agreement” which means that Obama and the other TPP nations could admit any other nation into the “collective” without having to seek approval from Congress. It also means that Obama could outsource huge portions and control of the US economy, which would include the internet, to foreign governments and foreign regulators. Obama has already confirmed that China is interested in entering the TPP. If the House follows the Senate and approves the fast-track authority for Obamatrade, which will guarantee the TPP approval. China could enter the TPP, which means China would be empowered thereby undermining the United States.

Continuing in his letter, Hunter points out that the creation of a TPP commission basically establishes a “new global governance” which could cede “US sovereignty to foreign and global interests.” This point has been highlighted by Sen. Jeff Sessions (R-AL) in a letter to Obama last week.

The new Commission would be a self-governing, continuing body authorized to issue policies and regulations affecting our economy, our manufacturers, our workers, our immigration procedures, as well as currency, labor, and environmental practices. It is one thing to enhance executive authority with respect to a narrow set of trade deal policies, it is another to fast-track the creation of a new international structure before a single detail about that structure has been made available to the public.

The key here is the creation of a new international structure in the form of the self-governing, continuing body known as the TPP Commission. It is very reminiscent of the “European Union” that some countries in Europe are now questioning. Through the TPP Commission, policies and regulations could be created that would be devastating to the US. What has not been considered is this “commission” would basically supplant, replace and become the governing body over this nation circumventing the Constitution. The powers granted to Congress in the Constitution could be stripped in favor of policies and regulations from the TPP Commission. If that weren’t bad enough, it could mean the Bill of Rights would be in jeopardy, especially the Second Amendment.

Hunter continued his letter to McCarthy noting that Republicans in Congress should “be skeptical” of Obama’s intentions since holding the majority.

What we do know is that obtaining a grant of fast-track authority from Congress is among the President’s highest second-term priorities. That should be a strong signal that the President intends to make full use of that power in his remaining time in office. After all, fast-track would give the President a guarantee that any international agreement he reaches can be ratified without subsequent Congressional input. TPP is just the first of several.

In the case of TPP, to approve fast-track would be to authorize the President to finalize this new Commission before we even know its authority and reach. Fast-track would also guarantee the President – and his foreign negotiating partners – ratification of this international Commission without the Constitutional treaty vote or even a Senate cloture vote. Shouldn’t we know the details of this new economic union before – not after – we have surrendered our ability to revise it, rewrite it, or regard it as a treaty? [emphasis mine]

Rep. Hunter hit the nail on the head – both chambers of Congress are surrendering to Obama and surrendering the people they represent to the whims of one man.

McCarthy has failed to respond to Hunter, which leads some to believe that he supports the fast-track authority placing him in the company of House Majority Whip Rep. Steve Scalise (R-LA), Rules Committee Chairman Rep. Pete Sessions (R-TX), and House Speaker John Boehner (R-OH). It appears they all are following the “Obamacare” fiasco whose famous mantra “we have to pass it to find out what’s in it” coined by Nancy Pelosi, saw members of Congress voting on legislation they didn’t know what it contained. It goes to show that we have irresponsible, traitorous, and criminal elements in Congress; however, that is no surprise.

Hunter pointed out to McCarthy that Americans are worried about the loss of sovereignty under this administration since this administration has sacrificed Americans on the proverbial alter of immigration to satisfy special interests. He called it “irresponsible” to pass such authority to the executive to “form a new, binding international governing authority” before anyone in Congress was briefed on how the usurper planned to use it.

As much as many Americans would like to believe there are members of Congress mounting strong opposition to the TPP fast-track authority, some may be calling it for what it is – another public dog and pony show to appear to be representing the interests of citizens.

What member of Congress could even remotely conceive of giving this “fast-track authority” to one man after hearing about some “international commission” that would act as a “global government” to the TPP members? It amounts to saying – “The Constitution, with its Bill of Rights and other amendments, is hereby rescinded in favor of the TPP Commission policies and regulations. All American citizens can now take an aerial intercourse at a motivating pastry.”

Let’s recap on some things and see where this is all going. Congress passed Obamacare, without reading it, which is designed to fail, begin rationing of health care based on age and usher in a single payer health care system. The United Nations Post 2015 Sustainable Development Goals advocates health care resources be targeted to populations under the age of 60 or 70 across all member nations. The Trans-Pacific Partnership, with its new commission, seeks to “rule” the member nations through “policy and regulations” with Congress unable to halt it even through legislation that has unanimous votes to do just that.

Operation Jade Helm will begin in a few weeks. In some places, such as Flint, Michigan, it has already begun. Foreign troops from Russia and China have been engaged in “joint training” with some of our military forces. On top of that, it has been reported that Obama has made a quiet nuclear deal with China while the Senate Armed Services Committee is still reviewing it.

As Steven Ahle points out in his article, “Obamatrade … US Gives Up All Sovereignty … Redistribution At It’s Worst,” new members can be added by a majority vote, the agreement can be amended by member countries after the deal is signed, and a majority vote can change the terms and conditions. Each member country gets one vote regardless of population thereby making a third world country with a population of less than 500,000 equal to a first world country with a population of over 300 million. “In fact, of the eleven countries in the TPP, an amendment can be added to the agreement with six countries and a total population of 82 million could defeat the five other countries with a total population of 633 million.”

In other words, Democracy (mob rule) and Constitutional Republic (protection of individual rights) forms of governance could take a back seat to “minority rule.” Not only that, corporations would have domination over populations. Could we see the beginnings of democide/genocide as some in the United Nations or other foreign governments advocate due to “sustainable development,” environmental preservation and initiation of Agenda 21 in full force?

It sounds as though Congress has locked arms with Obama in order to devastate this nation. At this point in time, it doesn’t appear that any amount of emails, letters or protests to our Representatives will result in any change to retain our nation. Boehner doesn’t agree with Impeachment and those who have hinted at drawing up impeachment articles have failed to do so. The lawsuit filed by Boehner has been a “dead duck” as it has gone nowhere; but, it served the purpose to deflect the attention of some citizens away from the fact that Congress has forsaken the supreme law of the land. Despite a few good men in Congress, both chambers are now filled with a majority of traitors and criminals: Republican and Democrats alike.

Our nation has approximately 18 months more of this administration and Congress. It seems that voting has done little as citizens have traded traitors for traitors regardless of party, even though these charlatans talked a good talk making “promises” they had no intention of keeping. Short of storming Washington, the District of Corruption, and physically removing each and every traitor there, trying them and then hanging them in front of the Capitol, it appears the citizens of this nation are at the mercy of our new Dictator and his “politburo.” Hopefully, this is not the case; but, the evidence is awfully convincing.